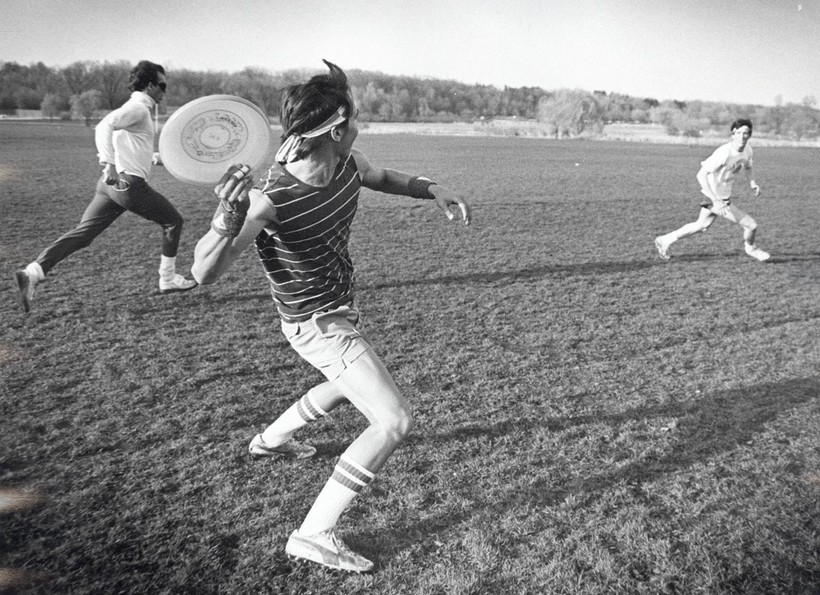 We've Been Throwing Frisbees For 60 Years

On Jan. 23, 1957, Wham-O produced its first bunch of Frisbees. The toy quickly became popular outside of the normal "toy demographic," as this image of University of Wisconsin-Madison college students from the 1980s attests.

The aerodynamic discs date back much earlier, though. William Frisbie opened the Frisbie Pie Company in Bridgeport, Connecticut, in 1871. Students loved to toss his empty pie tins and yell his name, "Frisbie!"

In the 1940s, Walter Frederick Morrison and Warren Franscioni invented an improved flying disc that could fly further and more accurately than a pie tin. They called their plastic version a "Flying Saucer."

Morrison and Franscioni’s partnership didn’t last, and Morrison made an even better version and sold it to the toy company Wham-O under the name "Pluto Platter." In 1958, a year after the toy’s release, Wham-O changed the name to Frisbee, a misspelled homage to the original pie company.

The team game ultimate Frisbee was invented in 1967 in New Jersey. Students at UW-Madison founded an ultimate Frisbee club in 1977. The Wisconsin Hodags, a team formed in 2001, have become one of the most dominant men’s college teams in the country, winning three national titles and making five finals appearances.

Another Frisbee variant, Frisbee golf, also called disc golf, was invented in the 1970s. Wisconsin has more than 200 courses and dozens of tournaments around the state.