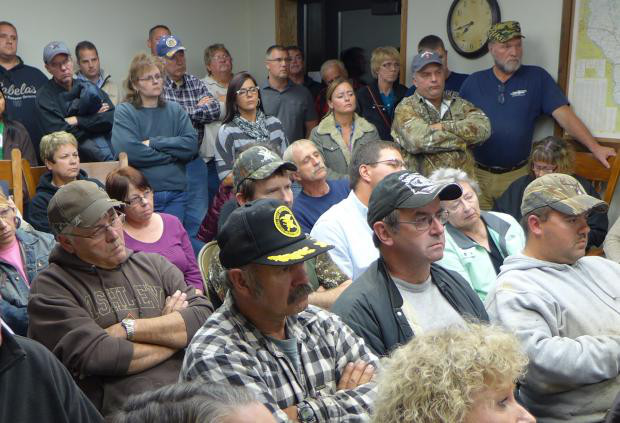 Residents of Trempealeau County gathered at a joint town meeting of Lincoln and Burnside last year to discuss the lawsuit.

City Of Independence Will Not Be Allowed To Annex Frac Sand Mines For 20 Years
By Rich Kremer
Share:

Two towns in Trempealeau County are settling a lawsuit against the nearby City of Independence over what they call an illegal annexation of a frac sand mine.

Lincoln and Burnside have agreed to settle a lawsuit claiming that Independence illegally annexed a strip of land through their towns to get to a proposed frac sand mine more than a mile and a half from the city. Lincoln Board Chairman Jack Speerstra said the settlement will let the annexation stand, but bars the city from annexing any more frac sand mines for 20 years.

"We’ve forced them to come to the table and work with us in the future, because there was a couple big annexations from my township that were in the works," said Speerstra.

Despite the settlement, a group of citizens living near the proposed mine have filed petitions to intervene in the case. Their attorney said if the judge allows, they'll continue the fight to overturn the annexation.