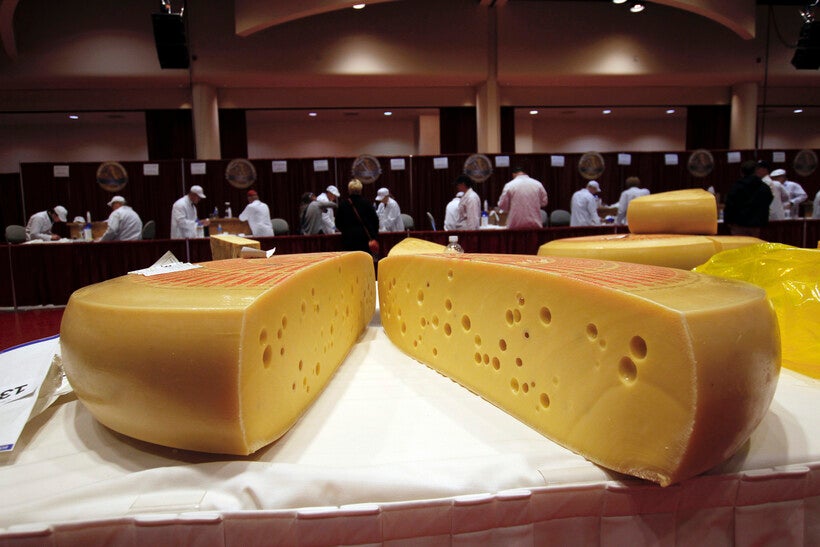 A wheel of baby Swiss cheese is displayed at the biennial World Championship Cheese Contest, Tuesday, March 3, 2020, at the Monona Terrace Convention Center in Madison, Wis. It's the largest technical cheese, butter and yogurt competition in the world. This year the competition had a record 3,667 entries from 26 nations. Carrie Antlfinger/AP Photo

Welcome to the 'cheese Olympics'

If you haven’t gotten your fill of elite competition, epic upsets and Olympic fanfare, you’re in luck.

Starting Tuesday, top competitors from 28 countries will fill Madison’s Monona Terrace, battling for gold in 141 events. But instead of adrenaline, their veins run with mold. And instead of triple axles and salchows, it’s triple crèmes.

The World Championship Cheese Contest — this year sandwiched between the Olympics and Paralympics — is the world’s largest technical competition in cheese, butter and yogurt.

"These are the cheese Olympics," said John Umhoefer, executive director of the Wisconsin Cheese Makers Association, or WCMA, which has hosted the biennial event since 1957.

What started out as primarily a cheddar competition has grown to include 141 different classes of cheese, butter, yogurt and dry dairy — from Colby and Gouda to Camembert and Feta. And for the first time — shockingly — this year’s competition will finally include a class for cheese curds.

The 53 judges who will evaluate submissions come from all over the world and are usually experts in their class, sommeliers of the cheese world. They work in pairs to taste and evaluate anywhere from 50-100 products a day. 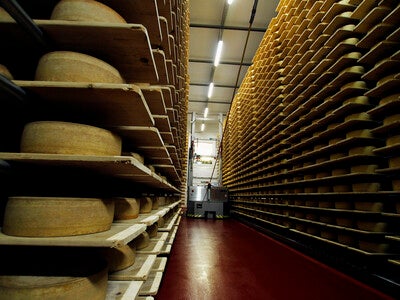 In this Feb. 27, 2017, photo, wheels of Grand Cru Surchoix cheese sit on spruce planks to age for nine months at the Emmi Roth USA production plant in Monroe, Wis. The company won the World Championship Cheese Contest in 2016 for the cheese and since then has seen an increase in sales of the cheese. The contest is organized by the Wisconsin Cheese Makers Association, which also organizes the United States Championship Cheese Contest that runs until March 9 in Green Bay, Wis. The contests are in alternate years. Carrie Antlfinger/AP Photo

He said there is a list of about 50 different defect adjectives, each of which is about a 10th of a point deduction. The best cheeses earn scores of 98 or 99.

The judges then average their two scores and award a bronze, silver and gold medal in each class. From the gold medal winners, they choose the top 20 for a final round of competition, ultimately crowning one cheese world champion. In 2020 it was a Gruyere from Switzerland.

A Wisconsin company has won 11 times, most recently in 2016 when Monroe-based Emmi Roth won with their smear-ripened cheese Grand Cru Surchoix.

This year, there are 2,919 entries (competitors can submit multiple products), which is down from a record-setting 3,667 entries in 2020.

WCMA events manager Kirsten Strohmenger said they haven’t seen a decline in the number of participants, but COVID-related labor shortages and supply-chain issues have impacted how many products companies have been able to get out the door.

Curious cheese fans can tune in at 2 p.m. Thursday for a livestream announcement of the top 20 finalists and the world champion.

The new event restrictions do not seem to have dampened the spirit of those involved.

"This is the best week on the job all year," Umhoefer said. 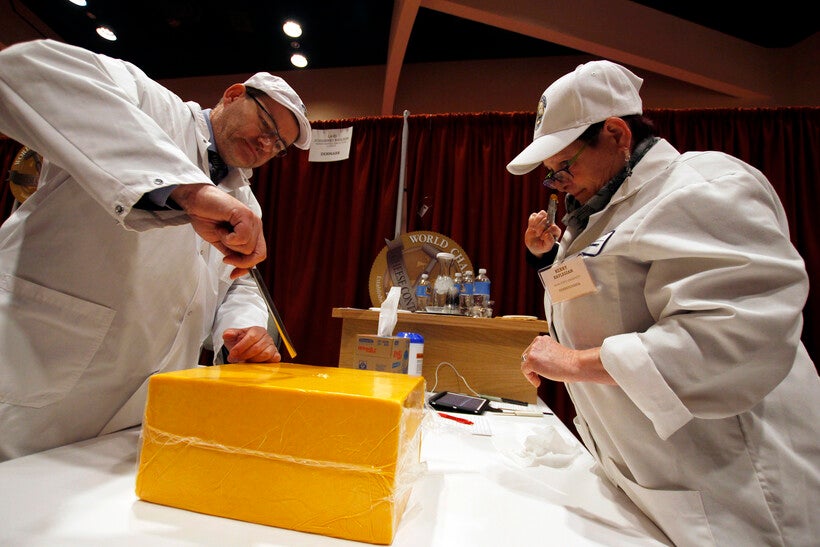 Judges Lars Johannes Nielsen and Kerry Kaylegian inspect a cheddar, aged one to two years, during the World Championship Cheese Contest, Tuesday, March 6, 2018, in Madison, Wis. The biennial event started Tuesday and runs through Thursday night. Organizers say this year there are a record of more than 3,402 entries, with participation up 15 percent from 2016. Carrie Antlfinger/AP Photo

For weeks, Strohmenger has been working with volunteers to receive and sort entries in a cold store warehouse. She said she enjoys getting to know new cheesemakers and new cheeses.

"We're used to what we see in the grocery store — cheesemakers that are local to us," Strohmenger said. "But it's interesting to see in person cheeses from across the country and around the world — just that different craftsmanship."

For Umhoefer, it’s about reconnecting with judges, sampling some great cheese — many of which people can buy in stores the day after the contest.

But it’s also about celebrating the cheese industry in Wisconsin.

This year, 64 Wisconsin companies are participating in the event — from the state’s oldest cheesemakers like Monticello’s Edelweiss Creamery and Monroe’s Chalet Cheese Cooperative to relative newcomers like Madison’s Yodelay Yogurt.

Tony and Julie Hook were college sweethearts who, like any good Wisconsinite, both loved cheese. After apprenticing at a small factory in Barneveld, Tony got his cheesemaker license in 1972. Four years later, he and Julie opened their own factory near Mineral Point and called it Hook’s Cheese. At first they focused on cheddar and Swiss. But within a few years they added Monterey Jack, marbled jack and what would come to be one of their signature cheeses: Colby.

As the name might imply, Colby cheese was invented in Colby, Wisconsin in 1885. And the best Colby producers have been making it the same way ever since. While similar to cheddar, an added cold-water wash and shorter aging time of only one to two months results in a milder cheese.

"There's not very many true Colby producers left out there but those of us who are, know each other and know who we are," Tony said. 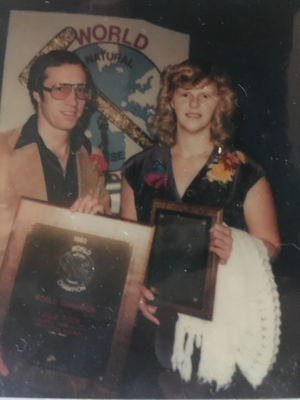 The Hooks worked on their Colby recipe relentlessly and in 1982 it paid off. That year, Hook’s Colby was crowned world champion and Julie became the first woman to take home the title.

While they had developed the recipe together, they decided to go for the split and double their chances.

And the win was a big boost for business. Before the competition, Tony said they were producing about 800,000 pounds of cheese a year. But after 1982, they grew to nearly 2 million pounds in annual production, which they maintained for nearly 20 years.

They’ve since cut back to about 500,000 pounds, but Tony said they still distribute to 37 states and continue to perfect their craft.

"Milk changes ... feed changes. Every year the weather is different. Everything affects what you're making so you have to kind of tweak everything as you go along," Hook said.

This year they are entering seven cheeses — five different blue cheeses, a sheep’s milk truffle, "and of course, since we won on the Colby 40 years ago, we had to enter the Colby again too, right?" Hook said.

When asked if he had a sense of where their cheeses might place, Hook said he wouldn’t even try to predict.

"It would be great if they won something, but I never plan on it until it happens," Hook said. "There's a lot of entries out there and everybody enters some awfully good cheese."

When Emmi Roth won the 2016 competition, they were the first Wisconsin company to take home the title in nearly 30 years. And they weren’t entirely ready for the resulting surge in demand.

"If you win this contest, I mean, get ready and put your seatbelt on because the volume of business that you can do is exponentially increased," Tim Omer, Emmi Roth president and managing director, said.

As soon as they won, Omer said he started receiving offers to buy everything they had on hand.

The Swiss-inspired producer specializes in high-quality, specialty cheeses. Their parent company, Switzerland’s Emmi, is a market leader that has been in business for generations. In the 1990s, Swiss immigrants brought their methods to Wisconsin and started the affiliated Roth Cheese.

About one-third of Emmi Roth’s business involves importing and distributing Emmi cheeses in the U.S. But the rest of their business is focused on developing their own products — including the world champion Roth Grand Cru Surchoix. 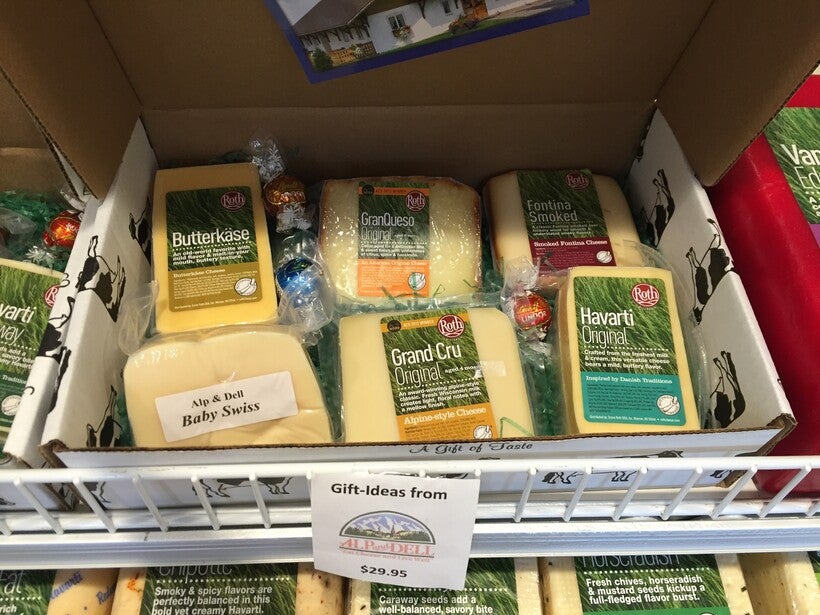 This Sept. 25, 2016 photo shows a sample gift box for sale at the Alp and Dell cheese store in Monroe, Wis. The store's shelves, bins and coolers overflow with cheese, much of it made locally by the award-winning Emmi-Roth Kase cheese factory. Beth J. Harpaz/AP Photo

Omer said Roth’s 400 employees take great pride in the quality of their products, but that’s only part of what drew him to the company seven years ago.

"One of the things that really attracted me to the company is the commitment that they have to sustainability," Omer said. "Not just are we being kind and gentle to the resources that we use, but are we also putting back into the land and into the communities."

Omer said the company is constantly trying to find ways to reduce their carbon footprint while maintaining quality production. Soon after he arrived, they installed a digester at their Platteville plant to process their own wastewater and return it to the city cleaner than how they got it. Last summer they installed solar panels at the plant.

Omer credits some of this to a Swiss ethos that has a reverence for nature. And their sustainability practices extend to people also. The company is committed to supporting small dairy farmers in both Switzerland and the U.S.

But Omer said the emphasis on sustainability goes hand-in-hand with their competitive spirit and a drive to continuously improve.

"The amount of pride that we have for our cheese is evident, but also we love being in contests and trying to show the world what we can do," Omer said. "It's kind of an obsession."

This year they have entered 12 cheeses in five different classes — two versions of their Grand Cru, Pavino, Gorgonzola, havarti, and their latest obsession: Gouda.

For Yodelay Yogurt founder Markus Candinas, the inspiration goes back to childhood. Both of his parents are Swiss, so much of his youth was spent traveling through Switzerland. He fell in love with their pastries and chocolates, and he ate fresh yogurt every day.

"It’s just what people do in Switzerland," Candinas said.

But whenever he came back to the U.S., he found that he didn’t enjoy yogurt as much. Years later, as an adult, he decided to find out why.

He started researching how Swiss yogurt is made — where they get their ingredients, what processes they use. And the answer was pretty straightforward.

"They use the best ingredients and they don't add stuff to it. It's just really simple," Candinas said.

So Candinas, who also has a Madison-area chocolate company, decided to replicate the minimalist process and founded Yodelay in Madison in 2017.

They get their milk from Brown Swiss cows in New Glarus, and Cardinas said he visits the cows often 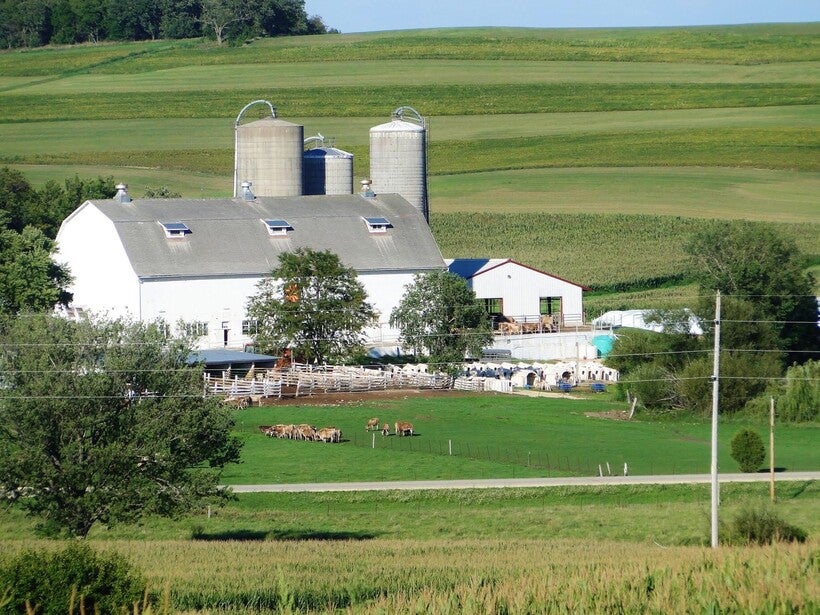 When making their yogurt, Candinas said they try to avoid taking things out, like milk fat, or putting things in, like stabilizers. The result is a yogurt that is slightly thinner than others, which you can drink or eat with a spoon.

And the result has been a winner.

In 2018 and 2020 they swept their yogurt categories, taking home gold, silver and bronze with their various flavors such as rhubarb, blueberry and peach-raspberry.

This year they are entering several more flavors, including their newest — pink grapefruit. But it’s hard to beat their past records.

"When you do well right out the gate there's a lot of pressure to continue that," Candinas said. "You can't go further than winning."