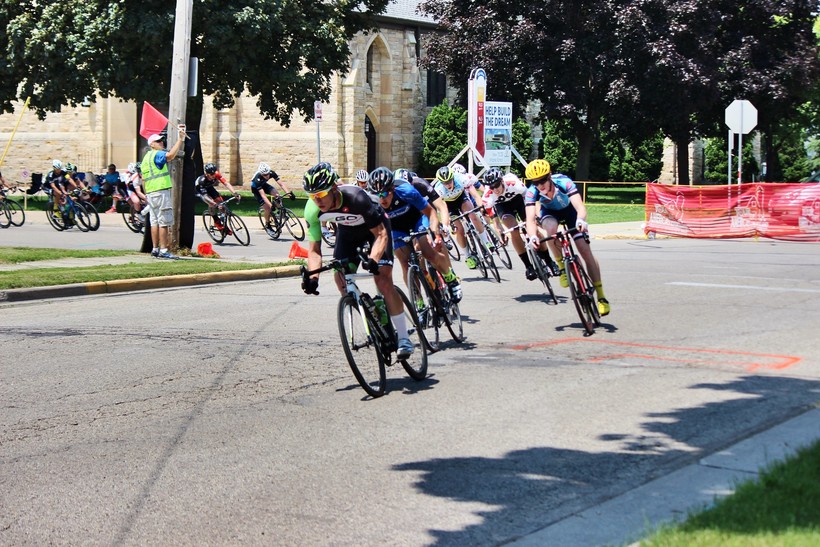 Participants in the Tour of America's Dairyland bike through Neenah, Wis., in 2015. G Kane (CC-BY)

Weekend Roundup: Tour Of America's Dairyland Back On Next Month

The event was canceled in 2020 because of the COVID-19 pandemic.

"Tour of America's Dairyland has put Wisconsin on the map around the globe," Bill Koch, executive director of the tour, told the Journal Sentinel. "It's a really proud moment for all of us to celebrate."

Frequent flooding is becoming a common inconvenience throughout Wisconsin municipalities as the year-round temperature continues to rise.

The state's average annual precipitation has increased between 5 percent and 20 percent since 1950, depending on the region, according to data from the Wisconsin Initiative on Climate Change Impacts.

Some municipalities are focusing on damage repair to wetlands; others are making sure rivers flow properly, reports the Milwaukee Journal Sentinel.

Ashton Howard of Kenosha was indicted in January with obstructing a law enforcement officer during civil disorder from an incident that occurred during protests in August.

Lawyer's for Howard, 27, say the indictment should be found unconstitutional because it relies on a federal law from 1968 that is sparingly used and meant to hinder civil rights activists.

Milwaukee Holds Event For This Year's May Day

May 1 is May Day, which marks International Workers' Day. This year, Milwaukee residents and advocacy groups marched in support of essential and immigrant workers.

Participating organizations included Members of Voces de la Frontera Action, Souls to the Polls, Youth Empowered in the Struggle, and The Party for Socialism and Liberation.

Thursday, Summerfest announced its lineup for this year's musical festival. Shows featuring Miley Cyrus, Chris Stapleton, the Goo Goo Dolls, Chance the Rapper, Joan Jett and the Blackhearts and many more are scheduled to take place Sept. 2-4, 9-11 and 16-18.

HERE. WE. GO. Your long-awaited 2021 festival lineup presented by @amfam. See you in September! Tickets on sale now: https://t.co/WuQZx2Kyqe pic.twitter.com/j9DenCyHm4

Wisconsin Spring Planting Ahead Of Schedule

Wisconsin farmers say spring planting is ahead of schedule this year.

Some essential crops, including soybeans and corn, have already been planted because drier weather has allowed farmers to get out into their fields earlier than previous years.

A weekly crop report from the U.S. Department of Agriculture says planting for Wisconsin’s staple crops is well ahead of the five-year average.

Wisconsin Farmers Union spokeswoman Danielle Endvick says farmers usually aim to finish planting by Memorial Day, but this year, many will have their crops in the ground by Mother’s Day.

A Wisconsin man accused of sex crimes ranging from assault to possession of child pornography has pleaded not guilty to 84 charges.

Forty-six-year-old Shane Stanger, of Burlington, faces 10 counts of second-degree sexual assault with an unconscious person, 66 counts relating to images or videos that rise to the level of a sex crime, six counts of child pornography and two counts of intimidating a witness.

Investigators say Stanger videotaped his attacks against his victims, including five who were under 18 years old. One of the alleged victims was a 10-year-old girl.

Competitive esports has gained popularity in recent years; participants range from elementary school all the way to ESPN professionals.

A community of gamers is growing in Madison, reports the Cap Times.

"We’re trying to develop the more responsible players that make the esport environment more inviting and not being so mean," said Matthew Hewett, an esports coach for the Madison Marvels. "Because there are some really mean players out there and we’re trying to start young and eventually those bad players will get weeded out and the entire environment will develop into something really, really nice."

Gillian Battino, a radiologist from Wausau, has joined the list of Democrats running for Republican U.S. Sen. Ron Johnson's seat, which is up next year.

"I don’t believe what Wisconsin or this country needs right now is another politician," Battino told the Milwaukee Journal Sentinel. "We need people who have done the work, understand how to get the work done, understand how to support it and design it from the very top."

Daniel LaBelle, a photographer in Kenosha, has boosted his fame by embracing social media. His TikTok account, where he posts comedic videos from his home, has more than 18 million followers.

A U.S. fuel pipeline on the East Coast was shut down on Friday as the result of a cyberattack.

Colonial Pipeline brought in a third-party cybersecutiry firm to investigate the nature of the cyberattack and has also contacted federal agencies and law enforcement, CNN reports.