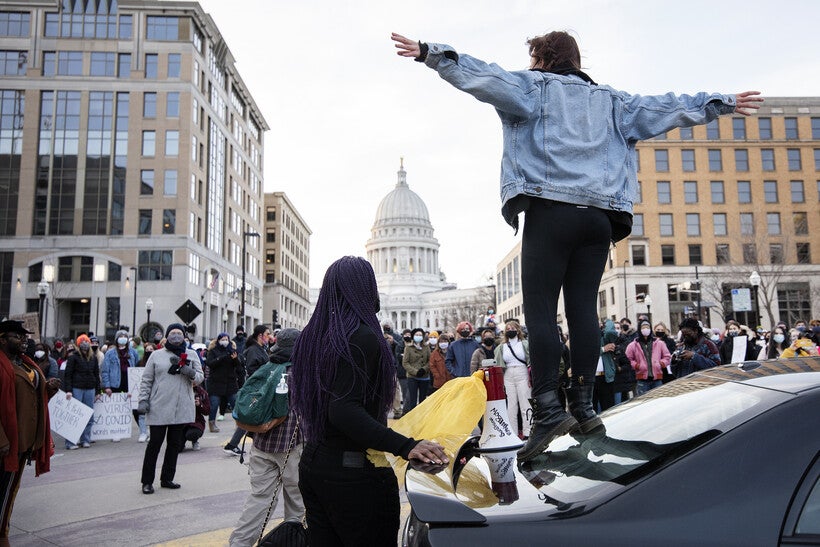 A protest leader spreads her arms as she speaks from on top of a car Thursday, March 18, 2021, during the March for Asian American Lives in Madison, Wis. Angela Major/WPR

Hate crimes in Wisconsin increased by 44 percent last year, according to a recent report from the Federal Bureau of Investigation. That figure is expected to be even higher, as many hate crimes don't get officially recorded as such by police, an investigation by Channel 3000 found.

Protests throughout the U.S. in 2020 brought attention to crimes against Black and Asian communities in particular.

Toshiana Northington, a Black woman who lives in Madison, and her children were physically attacked in a grocery store parking lot last summer, and she said the attacker repeatedly used racial slurs. He faces hate crime charges with the Madison police, but because of discrepancies within the legal system, the department didn't report the incident as a hate crime to the state Department of Justice.

"It’s really important that we have regular reporting, and that the people who are doing that reporting are out in communities talking about the fact that hate crime reporting is very important," she said.

The seven-day average for new COVID-19 cases in Wisconsin is 1,702 as of Friday. The Wisconsin Department of Health Services has confirmed 7,652 total deaths from the disease.

Health care systems in northeast Wisconsin are requiring vaccination for staff members. Some of those staff members have been rallying outside hospitals "in the name of medical freedom," the Green Bay Press Gazette reports.

"We are aware of planned protests in our communities, and respect all individuals’ rights to peacefully protest. At the same time, COVID-19 and its highly contagious variants continue to spread because there are still too many people in our communities who are eligible but choosing not to become vaccinated," said a spokesperson for Prevea Health.

What Texas' Abortion Law Could Mean For Wisconsin

The Wisconsin Examiner lays out what Texas' recent abortion law could mean for a state like Wisconsin and what state officials have said about the law.

According to the Examiner, Sen. Kelda Roys, D-Madison, said that if Roe v. Wade is overturned, people in Wisconsin are particularly vulnerable because of a 1849 state law criminalizing abortion. Roys, along with many other state lawmakers, took to Twitter to express their opinions on the issue.

Thread---> #AbortionBan in Texas is worse than it seems. https://t.co/JwNVfKD5UF

An investigation by the Milwaukee Journal Sentinel found that electrical fires are most common in the area surrounding the Milwaukee's poorest ZIP code — 53206 — and predominantly affect low-income Black residents who live in rental properties.

And the powers that be do little to prevent these fires from happening.

This piece from the Stevens Point Journal lists various services and memorials around Wisconsin that will be honoring civilians, first responders and military personnel who lost their lives in the attack in New York City on Sept. 11, 2001.

Roughly 3,000 people died that day, and at least a dozen of those victims had ties to Wisconsin.

In-person oral arguments will resume in the state Supreme Court next week.

Arguments are slated to begin the morning of Sept. 9 with a case involving setting deadlines for jury trials in mental health commitments.

The session will mark the first time the justices have heard oral arguments in the court's state Capitol hearing room since March 2020, when the COVID-19 pandemic took hold in Wisconsin.

Court officials say the arguments will be open to the public. Workers will clean the chamber and spectators may wear face masks or face shields. Justices can choose to have Plexiglass barriers set up around them.

An Army National Guard member from Wisconsin has pleaded guilty to a misdemeanor charge in connection with the Jan. 6 riot at the U.S. Capitol and has agreed to cooperate with the ongoing investigation into the incident.

According to court documents, 24-year-old Abram Markofski, of La Crosse, pleaded guilty Wednesday to one of four counts in a plea agreement with federal prosecutors. The charge of parading, demonstrating or picketing in a Capitol building carries a maximum sentence of six months in prison and a fine of up to $5,000. Sentencing before a federal judge is scheduled for Dec. 3 in Washington, D.C.

Climate Change: Are We At A Breaking Point?

Climate change has long been a polarizing topic. But as natural disasters like flooding, fires, and tornadoes become rampant — and occur more often in environments where they're uncommon — scientists and climate experts wonder if their concerns will finally be heard.

"That disconnect between acknowledging climate change is a problem and grasping the need to make at-times drastic changes in how we live in the world has long been a source of frustration for those focused on the threat posed by the Earth's warming," CNN reports. "The sad reality is this: It may take extreme events impacting millions and millions of American personally — and costing peoples' lives — before the proper urgency about climate change is reached."