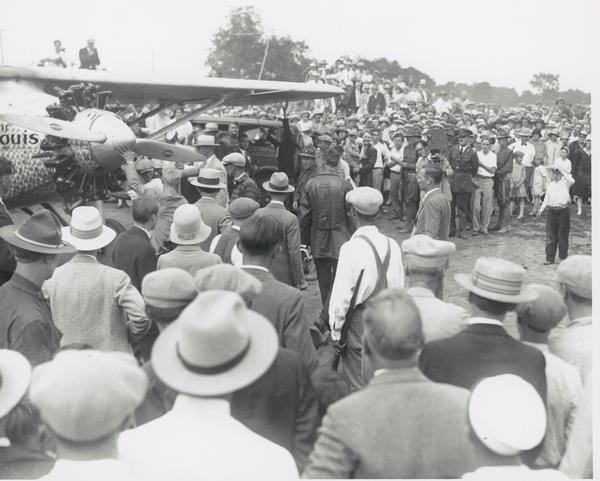 A crowd greets the Spirit of St. Louis after Charles Lindbergh flew the plane to Madison on Aug. 22, 1927, and landed at Pennco Field.

This Week In 1927: Celebrated Aviator Charles Lindbergh Returned To Madison

Vintage Wisconsin: Lindbergh Had Once Been UW Student
By Erika Janik
Share:

On Aug. 22, 1927, Charles Lindbergh flew the Spirit of St. Louis to Madison, circling the capitol dome three times and flying low over Camp Randall where a crowd gathered to cheer on his return before landing at Pennco Field near what today is South Towne Mall.

Lindbergh first came to Madison in 1920 as a University of Wisconsin-Madison student. His mother taught at Emerson School and the two shared an apartment on Mills Street for a time. But Lindbergh had a restless spirit and spent much of his time with friends, building an ice boat out of airplane parts and taking turns on Observatory Drive as fast as his motorcycle would go. He soon dropped out of the university and enrolled in flying school in Nebraska.

Although still unknown, Lindbergh convinced some businessmen in St. Louis to pay for the construction of an airplane that could fly over the Atlantic Ocean as part of a $25,000 prize offered by a French businessman. Six men would lose their lives in pursuit of the prize before Lindbergh set out on his own flight. Five years after he left the university, Lindbergh landed in Paris on May 21, 1927, the first aviator to cross the Atlantic Ocean alone.

Three months later, he landed in Madison at the invitation of Wisconsin Gov. Fred Zimmerman. The whole city essentially shut down and residents celebrated his accomplishments with a parade. Lindbergh gave a speech at Camp Randall and laid a wreath at the cornerstone of the nearly complete Memorial Union.

Lindbergh’s politics would later tarnish his reputation but in 1927, an adoring Wisconsin crowd greeted Lindbergh with a rapturous welcome.