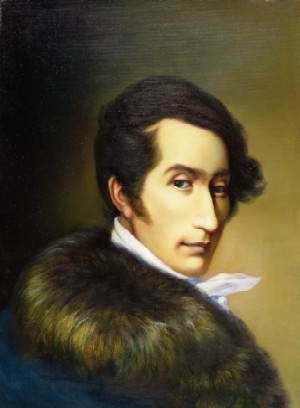 In 1804 Carl Maria von Weber was a 17-year-old composer and singer with little conducting experience.  He was invited to lead the theater orchestra in Breslau, and accepted the position in part because he hoped that its modest salary would enable him to support his father, an unsuccessful engraver.  He tried to bring in new musicians and new repertory, but at every turn he met resistance.  Then, in the midst of this series of temporary professional setbacks, Weber suffered a personal calamity that would last a lifetime.

One evening early in 1806 Weber asked a friend, Friedrich Wilhelm Berner, to come to his lodgings to go over the score of an opera Weber was writing.  Berner agreed but was delayed until long after Weber had gotten home.

Arriving home, Weber was thirsty and seeing a wine flask, he picked it up and took a long drink.  But the fluid in the flask was not wine.  It was acid--an etching solution Weber's father had carelessly poured into a wine bottle.

It was late by the time Berner arrived, but seeing a light in the window, he knocked on the door.  When there was no reply Berner tried the door and found it unlocked.  Entering the dark room he smelled a sharp odor.  Then he tripped over-a body.  It was Weber.

Berner cried out and Weber's father, clad in a nightshirt, came running in from the next room.  They called doctors but Weber's mouth and throat were badly burned and it was a long time before Weber could even explain what had happened.  He was sick for two months, and when he recovered, his beautiful singing voice had been forever burned away.

When he finally returned to the theater Weber found that all of his reforms had been reversed and, fearing that he would be blamed for the worsening performances to follow, he resigned and retreated from Breslau.  But years later he would take some comfort from words that he had written before accepting the post: "Nothing harms me which affords me experience."