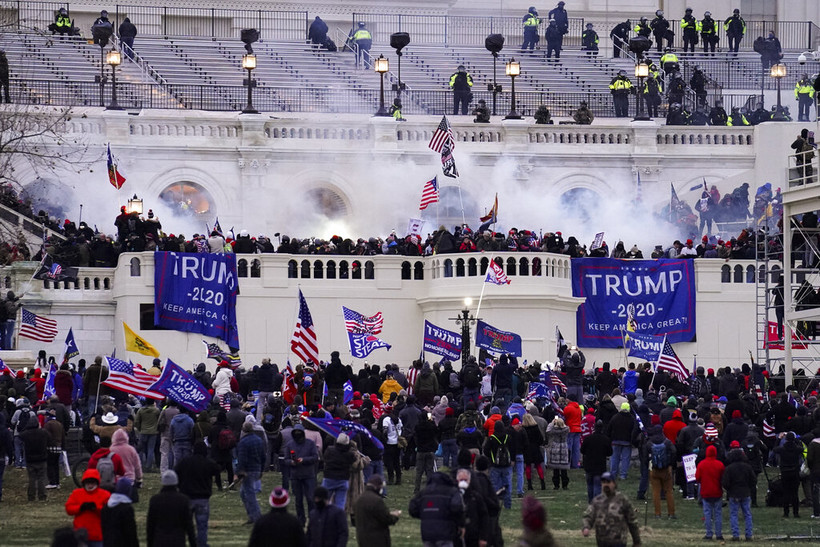 'We need to keep the vigilance up': Wisconsin panel on domestic terrorism looks at roots causes, responses to issue

A year after the deadly Jan. 6 insurrection at the U.S. Capitol, Wisconsin and national-level experts on domestic terrorism spoke at an event in McFarland on causes and responses to the problem.

The event, sponsored by the nonpartisan, nonprofit Wisconsin group We Are Many-United Against Hate, included discussions on the effects of domestic terrorism.

Masood Akhtar, president and founder of We Are Many-United Against Hate, noted the conscious decision to hold the event on the first anniversary of the Capitol insurrection.

"All of us can work together to make sure January 6th, 2021 never happens again," Akhtar said in a press release. "Learning from those who were once consumed with racial and cultural hate can teach all of us how to end that hatred."

Wisconsin Attorney General Josh Kaul echoed Akhtar's sentiments, saying government action at all levels is just one part of the solution to the problem of domestic terrorism.

"We really all have a role to play in fighting hate, and bigotry and racism," said Kaul. "It can seem like events are happening, you know, we see them on TV or on social media. It can seem like they're happening, and they're out of our control, but what I want to convey today is that that is not the case."

Kaul emphasized respect of the democratic system as a fundamental principle. He said political disagreements are normal, but respecting the results of democracy — like elections — is fundamental to that system.

"We know that the system itself is going to make sure that the voices of people are heard," said Kaul. "When that system is under attack, through things like hate, through bigotry, then we lose part of the benefit that comes with that concept of E Pluribus Unum," referring to the Latin motto of the U.S., "Out of many, one."

Thomas Brzozowski, a counsel for domestic terrorism with the U.S. Department of Justice, discussed the National Strategy for Countering Domestic Terrorism released by the White House last June.

"The national strategy adopts a whole government approach to preventing domestic terrorism and in reducing the factors that fuel it," said Brzozowski.

"At the end of the day, the fight remains much as it has been, and that's on the ground, in the street, and on the front line with state and local civic organizations and the broader public," said Brzozowski.

In one panel, Daryl Johnson, an expert on domestic terrorism, said people can't afford to let their guard down going into 2022, and that a majority of right-wing attacks have tended to happen during Democratic administrations.

"We need to keep the vigilance up," said Johnson. "I think we're going to be in this heightened period of domestic extremist activity for the next three to four years."

Brian Levin, a criminal justice professor and founding director of California State University's Center for the Study of Hate and Extremism, noted how hate crime rates have risen in Wisconsin in recent years.

Levin said the internet has been a catalyst for extremism.

"What we have seen is online social media has been a significant contributor to connecting isolated folks who have grievances into an elastic reservoir of grievance, where extremism at various strata, at various depths and various expanses has been allowed to grow and fertilize across the country," said Levin.

Johnson said the most important thing people can do is to not isolate individuals who've embraced extremism and conspiracy theories.

"Don't argue with them about what they believe, but actually show compassion and love," said Johnson. "Out of all the studies that I've looked at where people actually renounced their racism or got out of a white supremacy group or a Black supremacy group, it hasn't been because somebody convinced them that their logic was flawed or that their belief system was wrong. It was because someone they were taught to hate extended an act of love to them."

In another panel, former members of hate groups discussed their experiences with radicalization and deradicalization.

"It's never too little, it's never too late," said TM Garret, a former Neo-Nazi and Ku Klux Klan leader who went on to establish the nonprofit organization C.H.A.N.G.E, which does work ranging from community outreach to anti-violence campaigns. "If it was (too late), I would not be here today."

As the event came to a close, Akhtar encouraged attendees to bring the conversations to their own communities to continue efforts against hatred.

"Hate is not a Republican issue, hate is not a Democrat issue," said Akhtar. "It's a human issue, and lives are being lost for no reason."