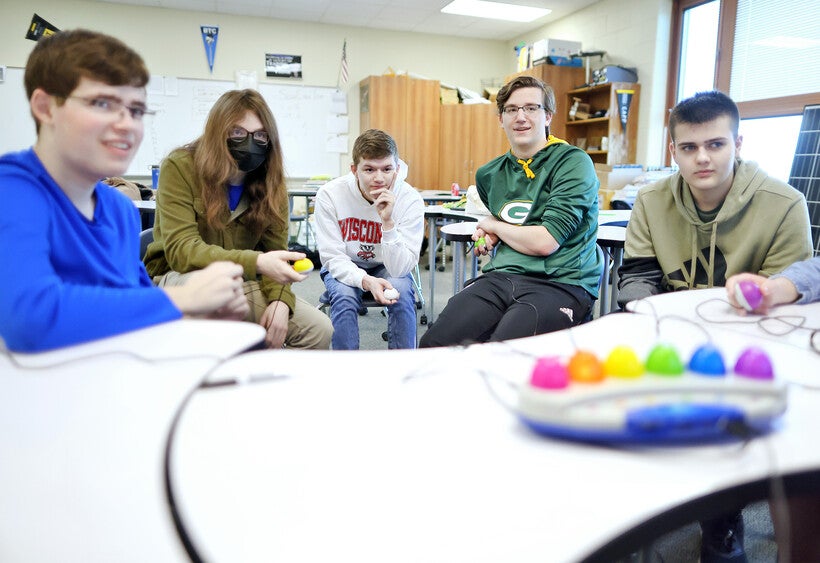 They are the only Wisconsin teams competing in the 55-team small school division
By Diane Bezucha
Share:

How well do you know world history?

"The defending side in this battle would execute a nearly identical strike one year later in the Battle of Rabaul with similar results. The commander in chief of the Combined Fleet had intended for a declaration of war to be delivered before this battle…"

Within seconds, he knows the answer is the attack on Pearl Harbor.

Kevin is one of eight Evansville High School students competing in the ​​National Academic Quiz Tournament this weekend in Rosemont, Illinois. It’s the national championship of quiz bowl. And Evansville's two teams are the only Wisconsin teams competing in the small school division — a field of 55 teams from across the country.

"I’m really excited about it," Kevin said. "I think it's going to be a lot of fun no matter how well we do, but I am looking to do pretty well. And I think we're well prepared for it and I think both teams can do very well."

The two four-person teams will compete in a series of head-to-head matches consisting of 20 toss-up questions, each worth 10 points. Moderators read the question — usually consisting of several sentences — and the first person to buzz in gets to answer.

Teams cannot discuss, but if the player answers correctly, the team gets an exclusive shot at three bonus questions, worth an additional 10 points each.

The goal is speed.

Answering the toss-up questions before the moderator reads all the clues earns an extra five points. (If you want a sense of how fast things move, you can listen to recordings of past tournaments.)

"We are a buzz first team," Anderson said. "My big thing is we can't win unless we're the first to buzz in. And so, we will take our shots where some teams will wait back, and they want to be sure they're right. Our philosophy has always been, through all these competitions, we will buzz."

Answering a question incorrectly means a five-point deduction, but Anderson said the risk is worth it. Because teams can earn up to 45 points each round, the scores can swing wildly.

"When you get a couple of teams that are competitive all the time, that last couple of questions becomes so tense, "Anderson said. "That’s the thrill."

And that excitement is what Kevin loves about quiz bowl, which he’s competed in since middle school.

"You're really focused in, zeroed in on the moment. And then at the same time, you're also just having fun with some of your friends. And you know, just showing what you know and how much you practiced. So it's a really good mix. And then by the end of the day, you're just completely exhausted."

His teammate, 17-year-old senior Elijah Winchel, has a good way to describe it. 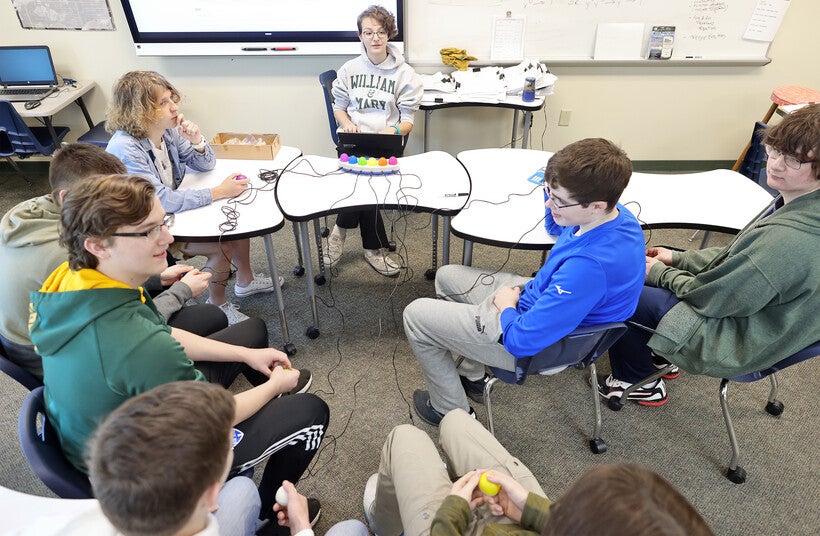 Anderson said the team meets twice a week — once during homeroom and once after school. They use the time to review questions and talk strategy. And they take a divide and conquer approach to content areas.

Elijah's strengths are paintings and psychology. He’s been using a flashcard app to brush up on art, musicals and composers.

But he leans on teammates for other questions.

"My history is bad," Elijah said. "But I know Kevin would have gotten it before me, and since he's on the same team as me, I can trust him to get that so I don't have to really worry."

Kevin's favorite subjects are history and mythology. To prep, he listens to audio of past national championships. When he finds gaps in his knowledge, he finds a book or an article to read.

Through practice and competition, Anderson said the students are really supportive of one another. And they have fun together.

They have a blue Matchbox car that comes to every competition for good luck. And they have a running joke for literature questions: when in doubt, guess Wuthering Heights.

For now, the club has eight students — enough for two teams. But Anderson has big plans for the future.

"My goal is to fill a bus," he said. "We're building some excitement with this and I think next year, these guys are leaving, but they're leaving a great pathway for new freshmen."

Both Kevin and Elijah plan to keep quiz bowling when they head off to college in the fall — Kevin to George Washington University in Washington, D.C. and Elijah to study video game design at UW-Whitewater.

But for now, they’re focused on the final competition of the season. After an entirely virtual season in 2020, they’re thrilled to be back in person.

The championships begin Friday with practice games, followed by round-robin preliminary competition on Saturday. The top teams will advance to the playoffs on Sunday.

"We're always fighting above our weight. We're running with some very big schools, but at the same time, we're always competitive," he said. "We are going to represent Evansville and the state of Wisconsin extremely well. I am proud of the work we've done. And I know as their advisor that they have put the practice in, and they will represent us extremely well."