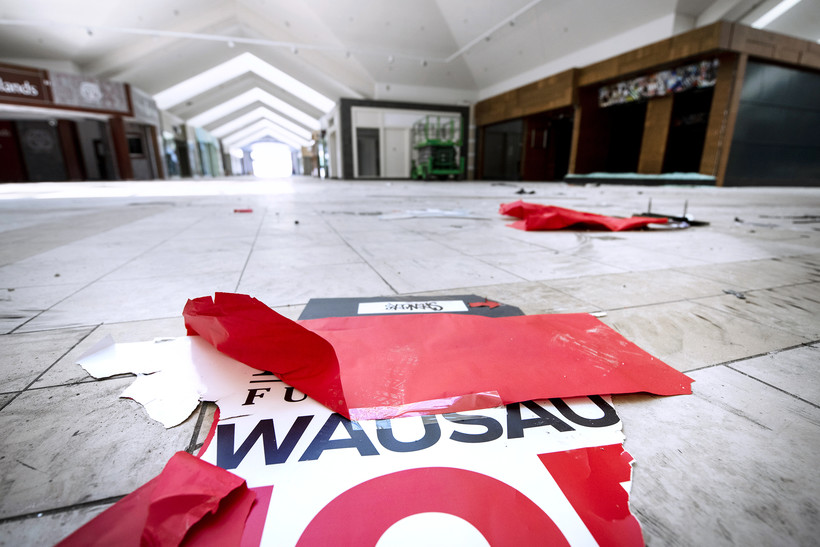 A sign is left on the floor of the Wausau Center Mall during demolition Friday, June 4, 2021, in Wausau, Wis. Angela Major/WPR

Wausau Demolished Its Mall. Could What Comes Next Be A New Model For Small-City Downtowns?

For Decades, Wausau Center Mall Was An Economic Pillar Of Its Downtown. Its Decline Shows Shifting Retail Landscape.
By Rob Mentzer
Share:

In a light rain in late May, Brian Crooks of Wausau stood on the sidewalk watching crews bring down a wall on the west side of the Wausau Center mall. Bricks and plaster crunched under the arm of an excavator. A worker sprayed the area with a hose to tamp down the dust.

The demolition of the Wausau Center mall had begun.

Crooks, 39, used to like to go to the music stores at the mall. When he was a teen, it was the coolest place in town. By the time it closed in 2020, there wasn't much left.

"Towards the end the mall was useless anyhow," he said. "They had nothing that interested me." 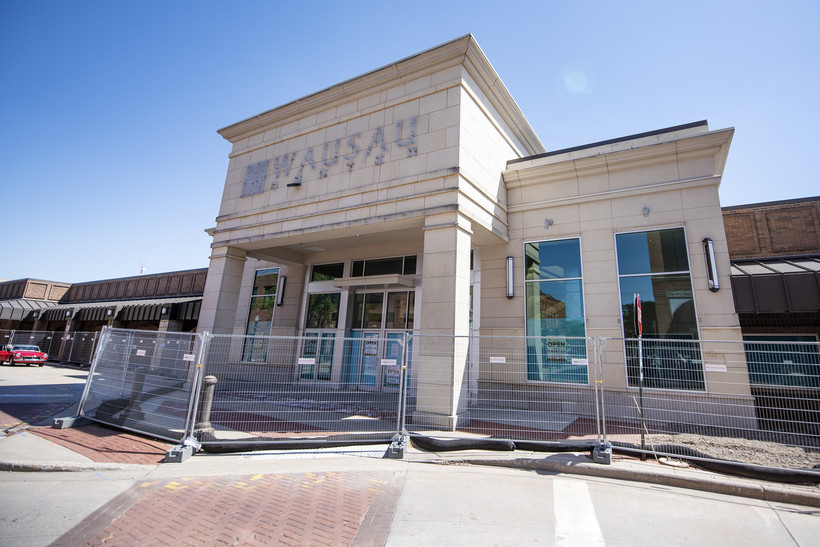 The front of the Wausau Center Mall during demolition Friday, June 4, 2021, in Wausau, Wis. Angela Major/WPR

Small-city malls have been in decline for more than a decade, and the story of the hollowing out and eventual closure of the Wausau mall is not unique. But the city also has an ambitious plan to remake the downtown space, which is now owned by a newly formed nonprofit with financial backing from local foundations.

The Wausau Center mall was born early in the mall boom, and its death comes as analysts project hundreds of other mall closures are imminent. For Wausau, the question now is whether the new owners' vision of mixed-use retail and residential development, complete with a pedestrian bridge to the river, will do for downtown in the next three decades what the mall did when it was established.

"You have to ask questions. You have to be prepared. You have to have the analysis," said Wausau Mayor Katie Rosenberg. "But you also just have to hold your breath and jump sometimes, and hope that you're guiding it in the right direction." 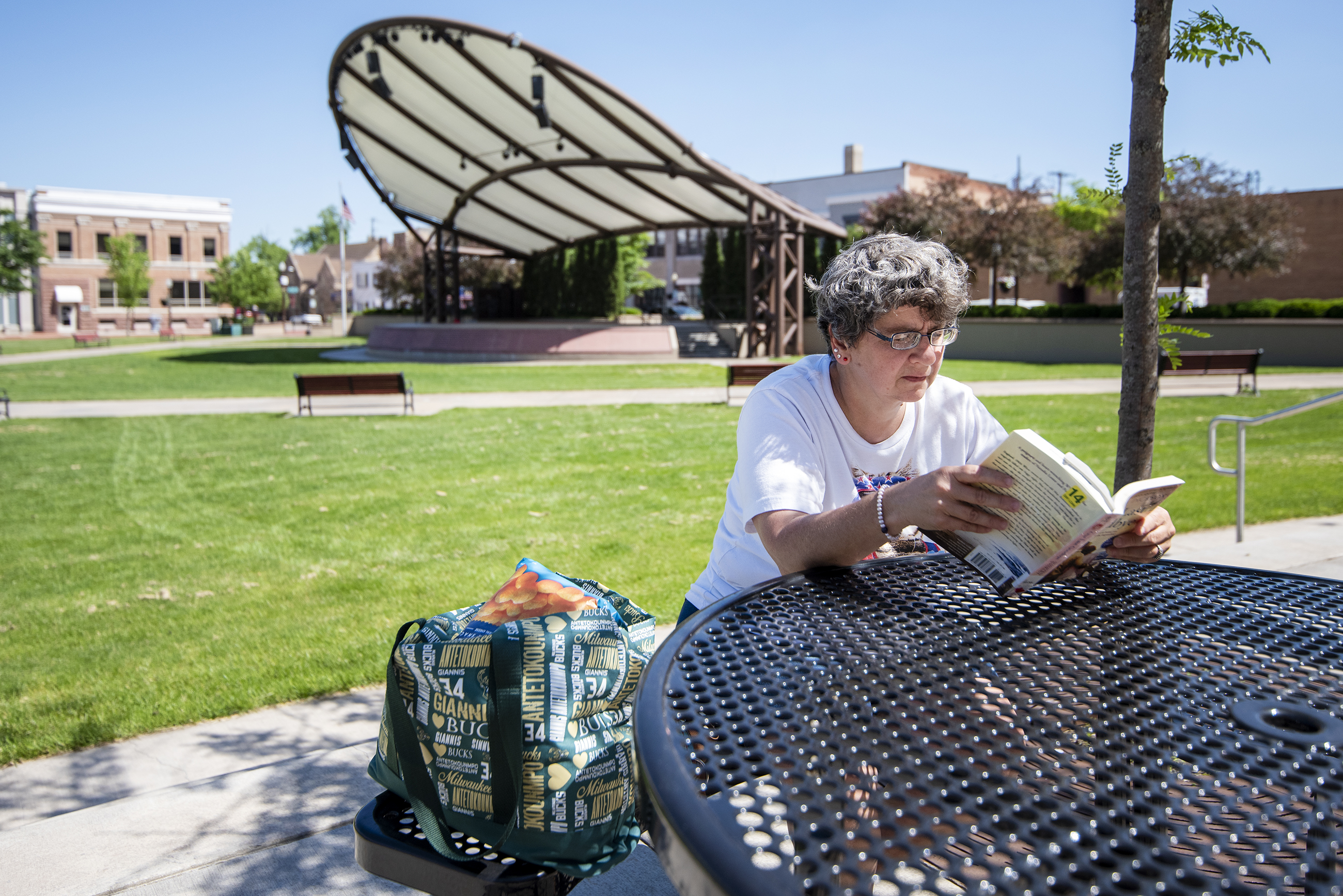 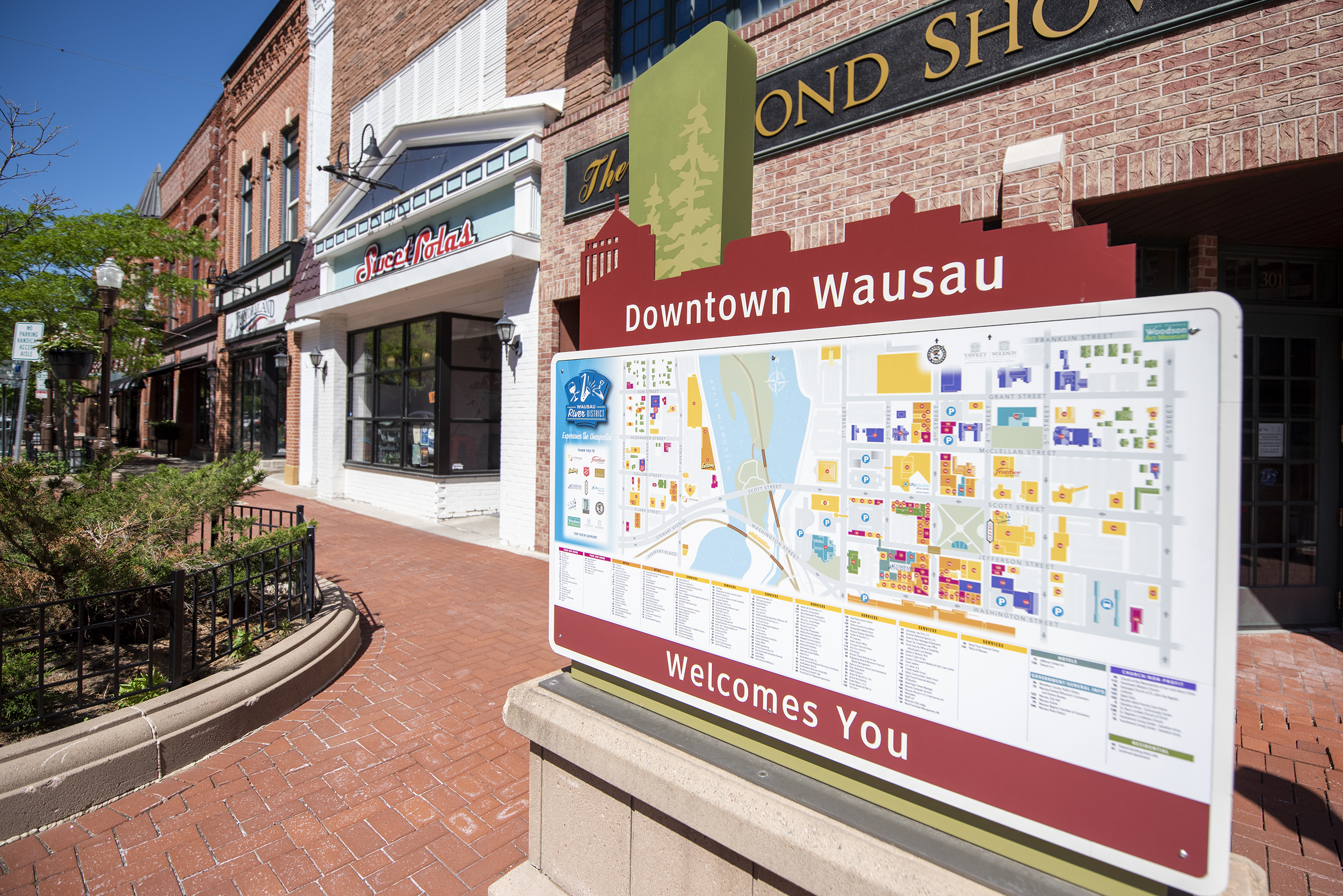 In August 1983, some 15,000 people came to the grand opening of the Wausau Center mall. The city threw a parade that featured, the Wausau Daily Herald reported, "Star Wars characters Princess Leia, Darth Vader, Seethreepio and a storm trooper," among others. Families thronged Third Street waiting for their turn inside the building. Two actors from the CBS soap opera "The Young and the Restless" signed autographs. There were clowns, and cookware demonstrations by a Le Creuset representative.

In the early '80s, an eight-square-block, "fully climate-controlled" enclosed shopping mall was the height of retail cool. For a lot of people in Wausau, the city getting a mall of its own was a sign Wausau was joining the modern age. The central Wisconsin city, then of about 53,000 people, finally had something to brag about.

That's the way it felt to Carrie Jurgella. She had graduated from high school in June and had a friend who was working at a Prange's department store. For the mall-opening gala, her friend convinced her to take a job as a live mannequin.

"We had to stand there for an hour at a time and try not to blink," Jurgella said. "And it was so funny because people would walk right up to your face and be like, 'Is ... is that real?' And they'd poke you in the face!"

Jurgella remembers the crowds of people and the excitement of the opening-week events. A reporter for the Daily Herald even interviewed her about her strategies for keeping a straight face while she posed.

"I try to just focus on something and look in a straight line," the newspaper quoted her saying at the time. "You just have to block things out, but sometimes I blush."

It was, she said, "great entertainment."

"If you asked me to do that today, I'd say no way," Jurgella said. "But back then, it was really fun."

The Wausau Center mall opened almost 30 years after the Southdale Center mall in the Minneapolis suburb of Edina became the world's first enclosed mall in 1956. By 1975, malls accounted for one-third of all United States retail sales. And by the 1980s, they had cultural cachet, too. A 1986 book by the editors of Consumer Reports listed shopping malls alongside air travel, the birth control pill and the disposable diaper as one of the 50 products that revolutionized Americans' lives.

The 21st century has not been so kind to the shopping mall. In the late '90s and early 2000s, shoppers were migrating to big-box stores in suburban strips. That was true in Wausau, too, where large retailers — Barnes & Noble, Best Buy, TJ Maxx — opened locations in Rib Mountain, luring shoppers away from the downtown mall. When online retail started to take hold, it further ate into shopping malls' share of retail spending. 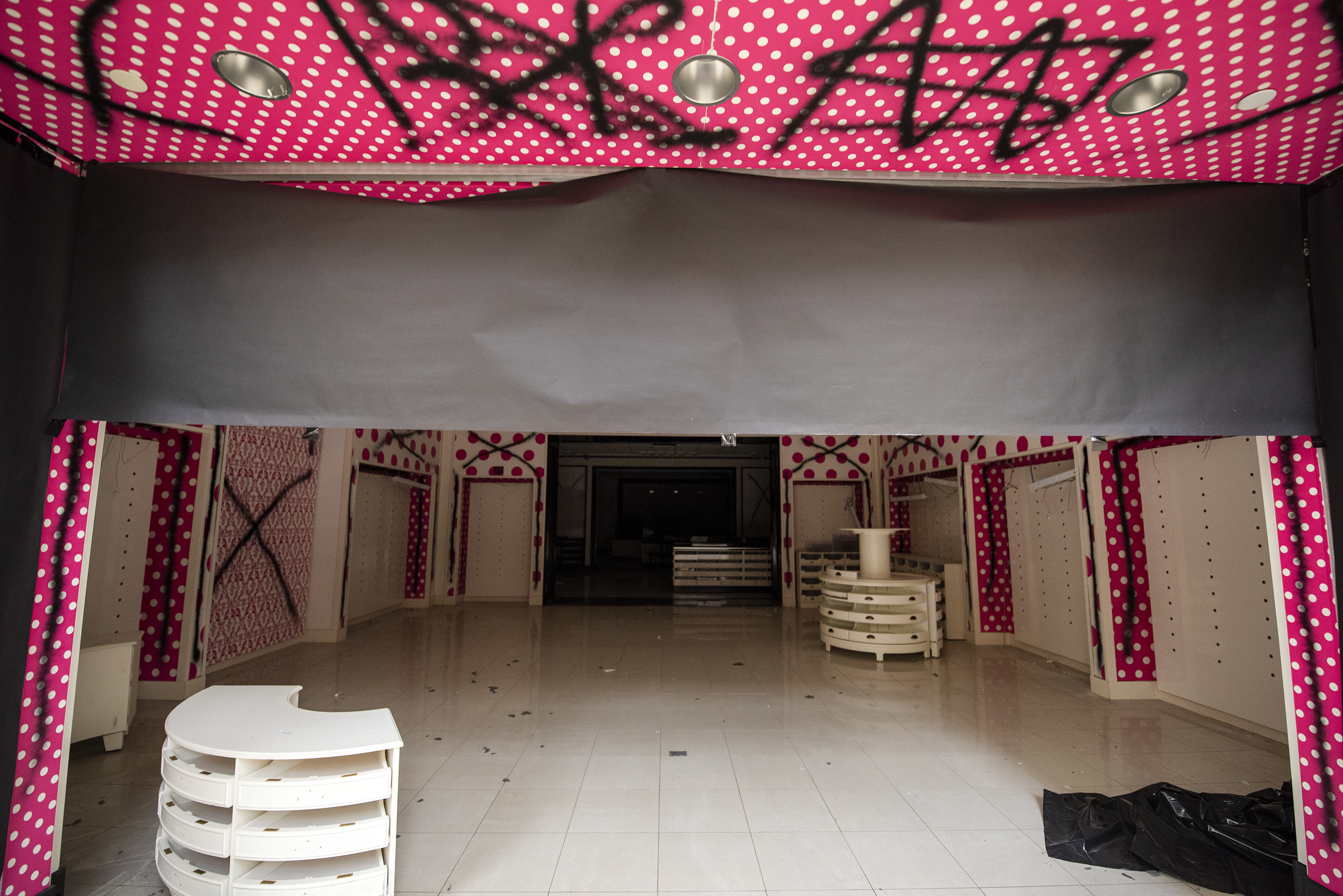 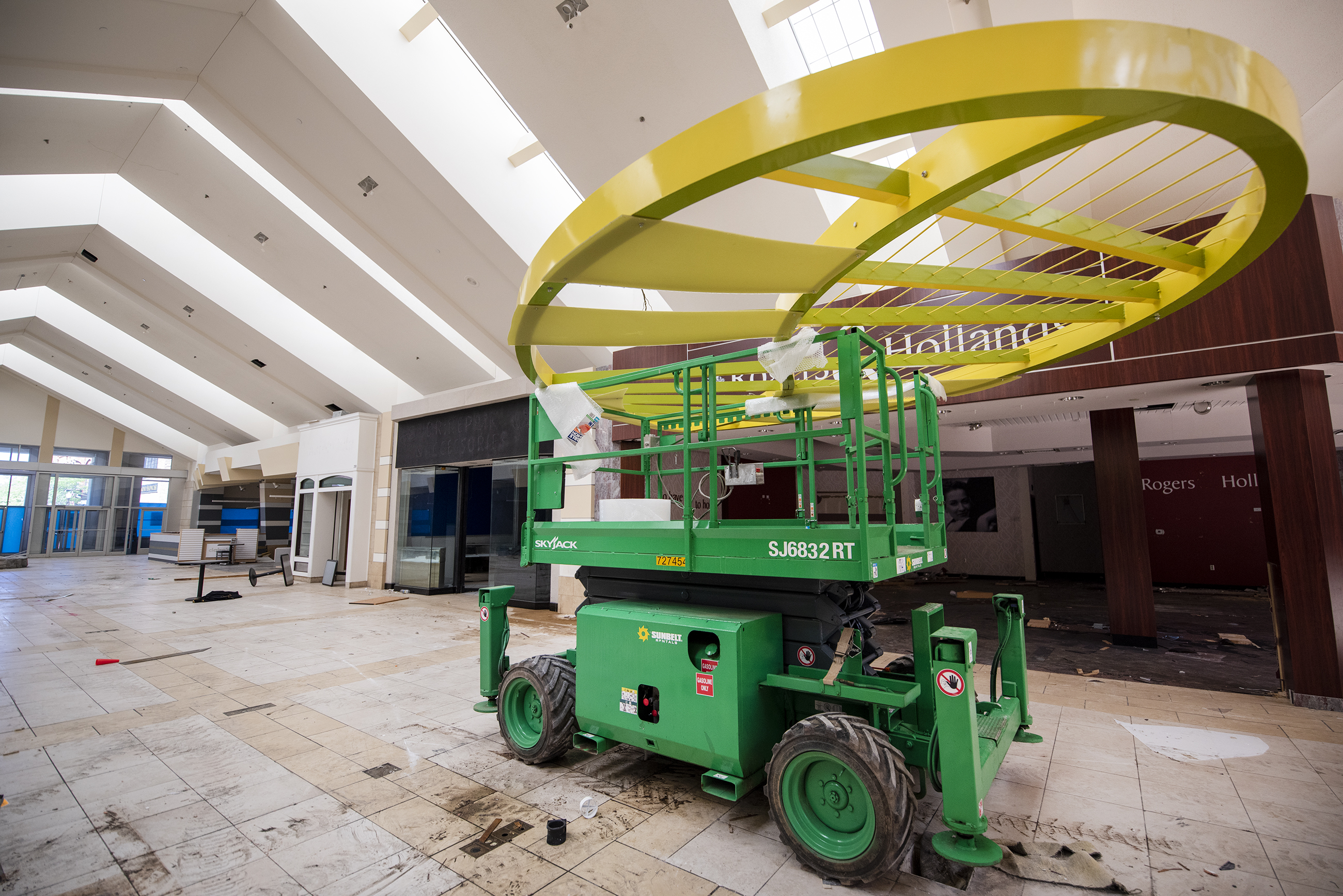 In 2017, the Wall Street Journal came to central Wisconsin for a report on the way these forces were affecting the Wausau Center mall. The Journal cited a 2016 Pew Research Center finding that Wausau had the highest proportion of middle-class residents of any city in the U.S., using this mall's decline as a symbol of broader American shopping trends.

"Wausau shows how an economically thriving community might shop in a post-mall age," the Journal wrote. "No longer are shoppers willing to drive distances to hit a clothing retailer. That is an online task. They are willing, however, to make an event of going downtown, to the compact shopping district where two-story brick buildings line the streets, to patronize Wausau's local boutiques."

For the first two decades of its life, the Wausau Center mall was successful at bringing shoppers into downtown Wausau. It was a hangout spot for teens, and its stores employed hundreds. Local leaders say it also helped to keep the city's broader downtown business district vibrant.

Today, unlike some small-city downtowns, there are few empty storefronts in downtown Wausau. And even as the mall became less popular and less populated in the years before it closed, the downtown continued to attract new businesses and support old ones, said Blake Opal-Wahoske, director of the Wausau River District. He said the business association is most excited about plans to add new downtown apartments.

An artist's rendering depicts a proposed development in downtown Wausau that would take the place of Wausau Center mall. Courtesy of Wausau Opportunity Zone Inc.

The mall's demolition is the first step in a larger transformation for downtown, said Dave Eckmann, the director of the Wausau Region Chamber of Commerce and president of Wausau Opportunity Zone Inc., the nonprofit that bought the mall in early 2020. Their artist's renderings include a serpentine pedestrian bridge to the Wisconsin River, a public market and what Eckmann calls an "economic development complex" in an abandoned electric building on the river.

Eckmann's group always planned to tear down the mall building. But the COVID-19 pandemic moved its timeline forward significantly. In February 2020, he said, "the numbers looked OK." Owning the mall wouldn't be profitable, but it could perhaps break even for a few years.

When the pandemic hit, "everything shifted, fast," he said. "The mall shut down, no commercial retail activity, and all of a sudden the numbers just go (off a cliff)."

What had seemed like it would be a gradual process, Eckmann said, became an undeniable reality: "We're not going to recover."

There’s a deep vein of local nostalgia for long-lost restaurants and shops that mall-goers used to frequent, and Rosenberg is not immune. She was born the year the mall opened. She remembers buying school supplies there as a kid. She went there for purple hair dye as a teenager and hung out at the mall’s coffee shop.

Rosenberg supports the transformation plans, but she did do some work to "right-size," she said, the city's financial commitment to the project.

Wausau Opportunity Zone purchased the mall from an out-of-state owner in part by taking advantage of federal "opportunity zone" tax credits. But it also received millions in city loans and tax incentives, in addition to the $2 million its funders initially put up to move forward with the purchase. Among her first acts as mayor, Rosenberg, elected in spring 2020, spearheaded a reworked agreement that removed some $2.6 million in city commitments.

"We need to invest in it," she said, noting that the city is paying demolition costs, and will be open to incentives aimed at attracting new business and ensuring equity in housing or other new plans. "But I want to make sure that we're really thoughtful." 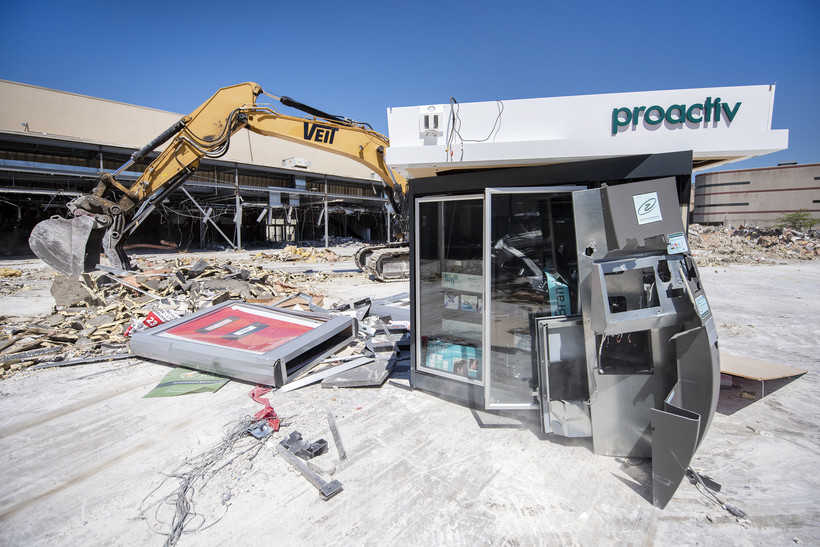 A kiosk remains as workers use excavators to demolish the Wausau Center Mall on Friday, June 4, 2021, in Wausau, Wis. Angela Major/WPR 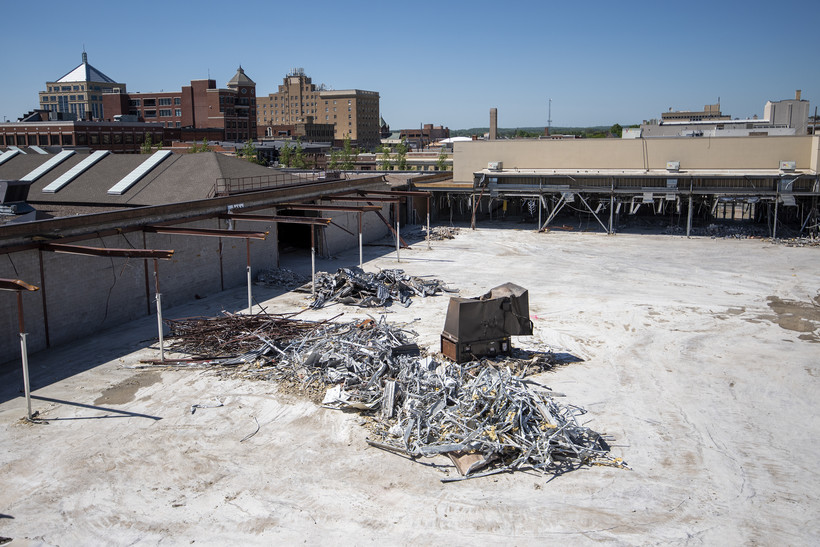 Rubble is arranged in piles during the demolition of the Wausau Center Mall on Friday, June 4, 2021, in Wausau, Wis. Angela Major/WPR

To build the mall in 1983, the city spent years acquiring the businesses that once sat in the same place: taverns, a barber shop, a mechanic. Bonnie Corvino's family owned the Northern Hotel, a 100-year-old hotel with "a red brick veneer and a tower on top," the Daily Herald wrote. It came down in 1981.

But Corvino sees recent developments on Wausau's riverfront as a positive for the city, and she's optimistic about plans to help the downtown evolve.

"Each generation has an idea of how to make money and how to make things beautiful," she said. "The whole city of Wausau is changing, and it's beautiful."

For Jurgella, even 38 years after she stood frozen as a human mannequin in a Wausau Center mall department store, she still feels a little sentimental about the place. She lives in the Madison area now, but visited Wausau with her adult children around Christmas. They talked about what stores were where, which friends had worked at different places.

"It was just like walking through a ghost town," she said. "It was sad, but I was glad I was able to be back there one last time and just share that with my children."

Last week, workers took down the mall's front entrance, the last piece of the building left standing. Two parking garages and a freestanding HOM Furniture store remain, and are part of redevelopment plans. In the next phase, the city and Wausau Opportunity Zone will be working to attract developers and retailers to build something new.