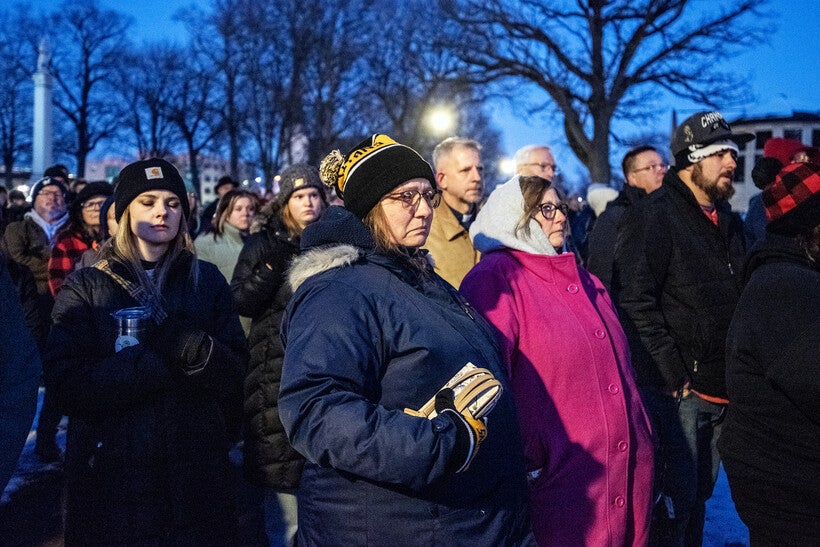 Attendees stand together Monday, Nov. 21, 2022, during a memorial on the one year anniversary of the Waukesha parade attack in Waukesha, Wis. Angela Major/WPR

'There's a sense of comfort and relief ... seeing the community coming together like this'
By Sarah Lehr
Share:

A year ago, Melinda Schultz was attending a Christmas parade with family when a man drove an SUV into the crowd, killing six people and injuring dozens of others.

Schultz, an off-duty EMT, jumped into action to help treat the victims.

The Waukesha resident has been dreading the attack's first anniversary. Her anxiety and depression intensified as the milestone approached, though Schultz says she found some solace by joining hundreds of others on the anniversary early Monday evening at a vigil at Waukesha's Cutler Park. 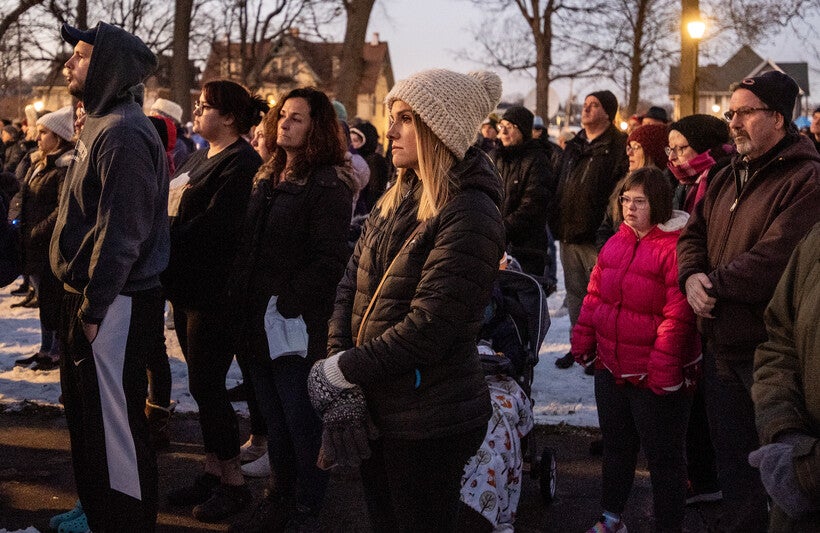 People listen to speakers on the one year anniversary of the Waukesha parade attack Monday, Nov. 21, 2022, at Cutler Park in Waukesha, Wis. Angela Major/WPR

"It's just as painful today as it was a year ago," Schultz said. "But ... there's a sense of comfort and relief because of seeing the community coming together like this, knowing that there is support."

The memorial began at 4:39 p.m., the time that driver Darrell Brooks started plowing into the crowd. Mourners in "Waukesha Strong" T-shirts wore blue armbands and held blue lights, the color designated by the community to symbolize unity after the tragedy.

People across the state are shining blue porch lights and Gov. Tony Evers, who addressed the crowd Monday, has ordered flags to fly at half-mast.

"Waukesha has worked to turn an unimaginable tragedy into a powerful source of hope and love and strength," Evers said. "It's been breathtaking to watch. You've all reminded all of us what community really means through faith, through kindness and compassion."

After hearing remarks from Waukesha's mayor, fire chief and police chief, attendees shared a prayer and sang "Lean on Me." Once the speeches were done, the crowd broke into an impromptu chant of "Wauk-e-sha." 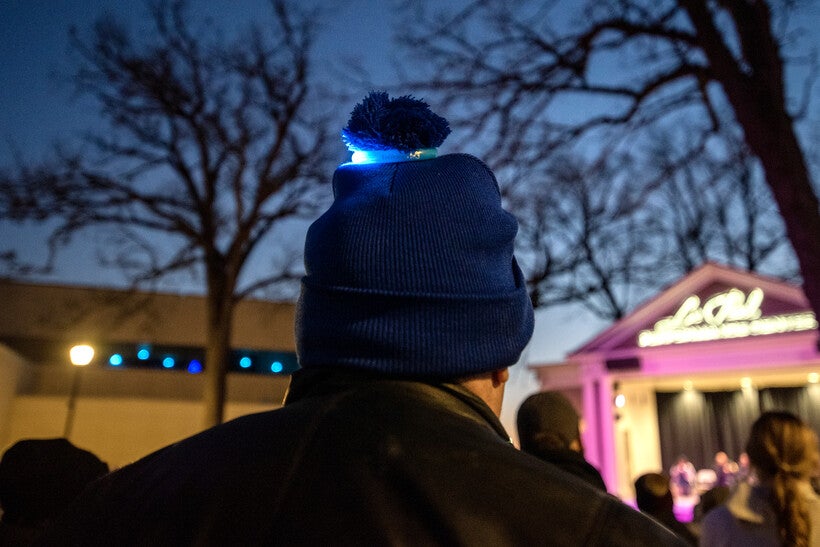 Blue lights are displayed to support Waukesha on the one year anniversary of the parade attack Monday, Nov. 21, 2022, at Cutler Park in Waukesha, Wis. Angela Major/WPR

For Waukesha resident Tom Reilly, the vigil was a chance to celebrate community after what Reilly referred to as an act of "radical evil."

Last week a Waukesha Circuit Court judge sentenced Brooks, who is 40, to multiple life sentences in prison for perpetrating the attack. 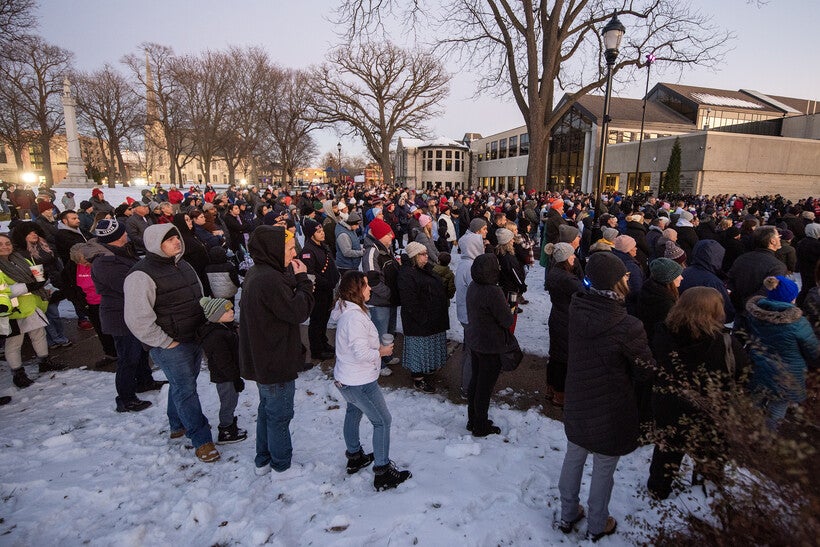 A crowd stands together on the one year anniversary of the Waukesha parade attack Monday, Nov. 21, 2022, at Cutler Park in Waukesha, Wis. Angela Major/WPR

Local leaders are raising money for permanent memorials on Main Street, near the site of the attack, and in Waukesha's Grede Park. And the city plans to host a Christmas parade Dec. 4 with added safety measures.

But next month he'll be joining in.

"I certainly intend to be there this year," he said. "This parade will not fizzle and fade."

Following the tragic events of the 2021 Waukesha Christmas Parade tragedy, officials have decided to move the event to the week after the holiday so more police and fire department resources are available.

A judge sentenced Darrell Brooks Jr. to spend multiple lifetimes in prison for killing six people and injuring dozens of others by plowing his SUV through the Waukesha Christmas Parade last year.

'Doing what they loved': Waukesha remembers the victims of parade attack ranging in age from 8 to 81

An 8-year-old boy, a local bank teller and grandmother, and several members as well as a volunteer for the Milwaukee Dancing Grannies are among the deceased.

As Darrell Brooks Jr. awaits sentencing in the Waukesha parade tragedy, victims and their family members spend the first day of the two-day sentencing sharing how Brooks' actions impacted their lives and the ongoing trauma from the event.