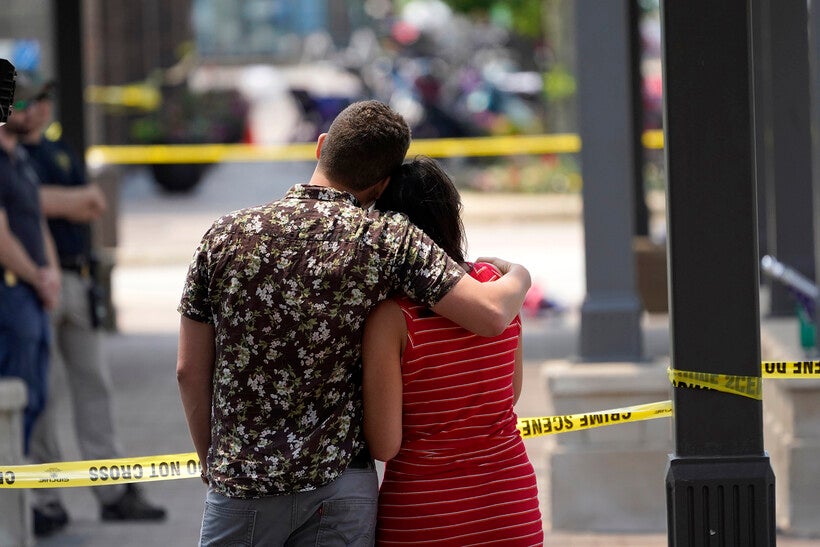 Brooke and Matt Strauss, who were married Sunday, look toward the scene of the mass shooting in downtown Highland Park, Ill., a Chicago suburb, after leaving their wedding bouquets near the scene of Monday's mass shooting, Tuesday, July 5, 2022. Charles Rex Arbogast/AP Photo

Efforts come less than a year after a suspect drove SUV through Waukesha Christmas parade, killing 6
By Rich Kremer
Share:

People with ties to Waukesha's holiday parade tragedy in November are working to help victims of a mass shooting during a Fourth of July Parade in Illinois.

Jan Kwiatkowski is a co-leader of the Milwaukee Dancing Grannies. The 55-and-older dance group lost three members on Nov. 21 when a suspect drove his SUV through Waukesha's Christmas Parade in the city's downtown.

When news broke that a gunman killed seven people and injured more than 30 others during a Fourth of July parade in the Chicago suburb of Highland Park on Monday, Kwiatkowski said it was "a real punch" and triggered terrible memories.

"Just seeing the chairs, the coolers, the crowd running and all of the stuff that was on the media after that just brought everything back to the people who were there," said Kwiatkowski.

Now, the Dancing Grannies and others with ties to the Waukesha tragedy are mobilizing to help their Illinois neighbors. 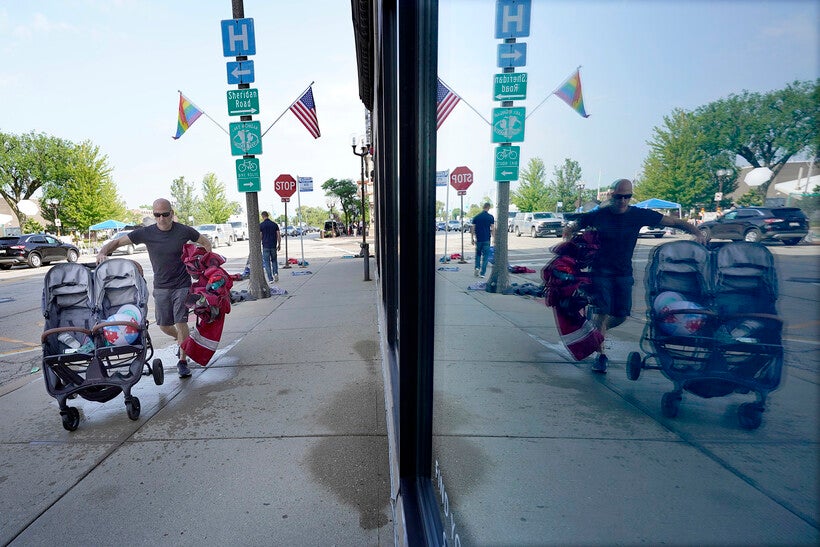 Highland Park, Ill., resident Murry Rosenbush is reflected in a store window as he removes items left behind by attendees to the town's Fourth of July parade Tuesday, July 5, 2022. A shooter fired on an Independence Day parade from a rooftop spraying the crowd with gunshots initially mistaken for fireworks before hundreds of panicked revelers of all ages fled in terror. Charles Rex Arbogast/AP Photo

Kwiatkowski said the group had previously scheduled a fundraiser for July 23, in which they'll sell "Granny Strong" bracelets. She said proceeds from that event will be donated to members of the Highland Park community.

Members of a Facebook group named Waukesha Strong Community, formed after the deadly November Christmas parade, have also been discussing ways to help residents and victims in Highland Park.

Kelly Fleming owns KT Kayaks in Hartford and is planning to move to Waukesha. She said the mass shooting at the Illinois parade was like an "awful deja vu."

"What hits me the hardest is… can we have fun anymore?" asked Fleming. "Who's really going to be able to go to a parade now anymore without kind of panicking a little bit?"

Fleming is working to organize a vigil in Waukesha for their Illinois neighbors that can be streamed online. She said she's reaching out to members of the Brookfield-Elm Grove Interfaith Network to potentially coordinate such an event.