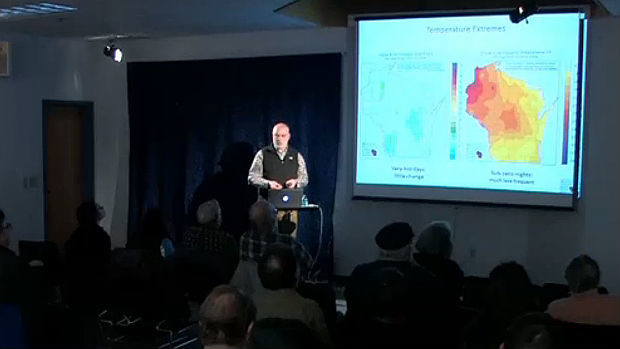 Wisconsin's climate is gradually warming and is forecast to get warmer by the mid-21st century. Climatologists track this regional reflection of a planetary trend in large part through a series of satellites that gather data about Earth's lands, seas and air, and subsequently, use this information to help model long-term climate projections. The science and mathematics underlying this research are complicated, but they document how human activities contribute to and can be affected by these changing climate conditions.

The Wisconsin Initiative on Climate Change Impacts (WICCI), launched as a partnership between University of Wisconsin-Madison researchers and state regulators, is building upon more than a half century of local weather observations to identify ongoing and potential future temperature and precipitation scenarios for the state. One distinct trend this research identifies is that warming is more pronounced at night, with low temperatures rising above normal more often than high temperatures, particularly in winter. This phenomenon is more distinct in northwestern Wisconsin than elsewhere in the state.

One member of the WICCI team is David Liebl, a faculty associate with the UW-Madison College of Engineering and a stormwater specialist with UW-Extension. In this latter role, his work includes helping local and state officials adapt to changing precipitation patterns and their impact on runoff. In a Feb. 10 talk delivered at the UW Space Place in Madison, Liebl offers an overview behind the science of climate change, focusing on how satellite data are used to inform long-term modeling. The talk was recorded for Wisconsin Public Television's "University Place" program.