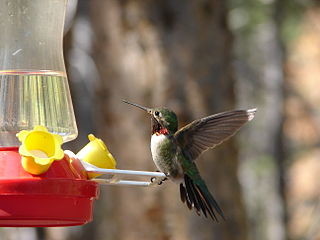 It's a thrill to see hummingbirds at a backyard feeder, but feeding wasps and hornets is not nearly as enjoyable. Photo by Michelle Lynn Reynolds via Wikimedia Commons.

Whether they’re experience birders or not, many people enjoy feeding birds. And few birds are as exciting to watch as hummingbirds.

Hummingbird feeders attract more than those fascinating little birds. They are also popular with wasps and other insects. Naturalist Bill Volkert says that hummingbird feeders generally come with bee guards, which keep insects away from the sweet liquid without causing an obstruction for the birds. It can work as a deterrent, but Volkert says that they aren’t foolproof. He shares that one remedy is to have a shallow container of sweet soda with some dish soap poured on top. The wasps are attracted to the sweetness, but can’t avoid the soap, which makes it difficult for them to fly. But getting them to the trap can be difficult. As Volkert explains, “It’s really hard to lure them to that when you’ve got the hummingbird feeder right there. It’s almost like trying to live trap a woodchuck in the garden by putting carrots and apples in a trap. When you’ve got so much food around, why would they go in the trap?”

Noel Cutright is a past president of the Wisconsin Society for Ornithology. He recommends a trap that will actually be more attractive to the wasps and hornets than even the hummingbird feeder. Take a 2-liter soda bottle, put about a half-cup of water in and add a quarter-cup of sugar and then shake until it dissolves. Then add a cup of apple cider vinegar, mix, and then add a banana peel. Then add more water until the bottle is about half-full. Cut a hole in the cap large enough for a wasp to get in, set it out, and Cutright says, watch them come. “They’ll crawl inside because they’re attracted to the sugar, vinegar, and banana peel. And of course, they’ll go in the bottle and end up drowning in the water,” he explains.

If you enjoy feeding hummingbirds and other migrants, don’t worry that you’re keeping them around longer than they should stay. Cutright says that when it is time to go, they will leave no matter how much food is available. And more importantly, food can be critical for stragglers that are still here after the majority of their cohort has already taken wing. So don’t take those feeders down too early. “Later in the fall, if you haven’t seen a hummingbird around for two or three weeks, it’s probably safe to take it down, But that could be October or even early November.”