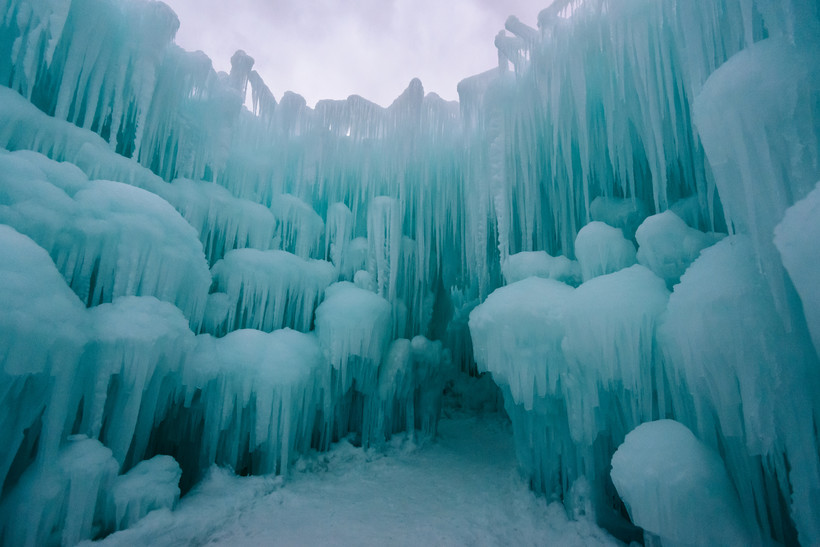 The Winter Wonderland Should Open Later This Month
By Phoebe Petrovic
Share:

In Lake Geneva, bouts of warm rain have delayed the opening of a new winter attraction: an ice castle.

For the past few months, a crew has toiled on the hand-built, one-of-a-kind structure on the sandy shores of Lake Geneva. Every cold night, an icicle farm comprised of sprinkler systems and metal racks grows 10,000 icicles, which workers harvest the next morning and attach to their ever-growing, ever-changing sculpture.

The finished castle will tower overhead and contain slides, tunnels, frozen-LED lights and even a fountain.The people behind it hoped to have the attraction open to the public around Thursday, but now, they’re a few weeks behind schedule.

"For about the fourth time we're about three-quarters of the way finished," said site manager Jesse Stone, who arrived from Utah in late summer as part of the company Ice Castles. "We keep having these rainstorms that come in and seem to take us out."

The melting rains of December and January follow a frozen November that actually allowed Stone and his crew to start building ice 10 days before Thanksgiving, a new record for him. The ice castle construction process is a volatile one.

"The winter’s gonna hit," said Stone. "In this industry, we always have seasons like this and we’ve never not opened. So, we’ll get open. The (cold) weather will be there. It’s just a matter of when — not if, but when."

The project comes from the Utah-based company Ice Castles, which currently has five other sites in North America, two of which are open. Stone is the only worker who moved to Lake Geneva for the castle. His 30-person team hails from Walworth and Waukesha counties, which he hired gradually as work ramped up.

Last year, the festival drew 70,000 people. Joe Tominaro, marketing and development director for VISIT Lake Geneva, said the new castle could cause that number to double this year, if Mother Nature allows.

"We’re here to embrace winter and we love winter," Tominaro said. "But it seems that Mother Nature is always throwing a wrench in the works."

Once finished, the ice castle will remain open as long as weather permits.