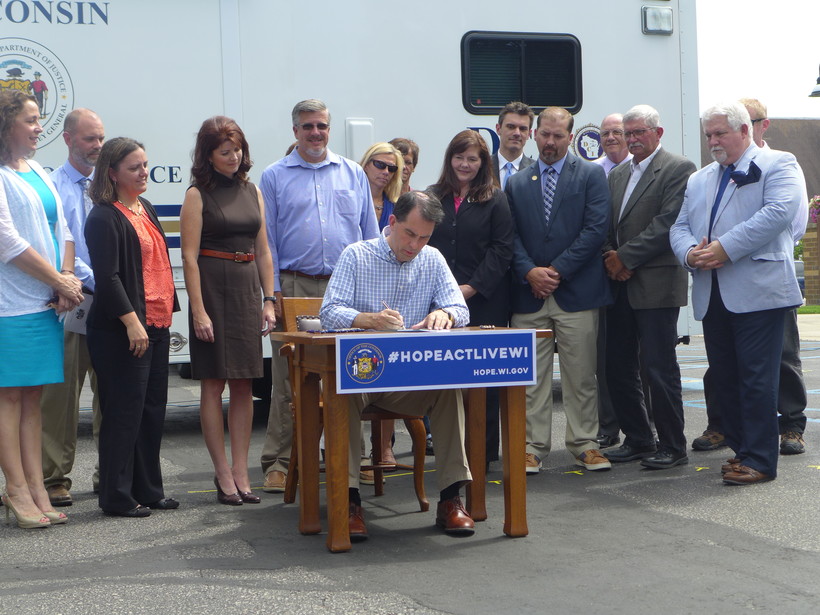 Gov. Scott Walker signs part of the HOPE Agenda legislation during a stop in Onalaska on Monday, July 17, 2017.

Gov. Scott Walker has signed 11 bills designed to combat opioid addiction during a tour of the state Monday.

Stopping in De Pere, Schofield and Onalaska, Walker signed the latest bills in the HOPE Agenda, an effort by the Legislature to address increasing heroin and opioid abuse since 2013.

Walker called a special legislative session in January to pass the bills, calling opioid addiction a public health crisis in Wisconsin. The Legislature still took more than five months to pass all the measures.

Walker said Wisconsin has been one of the most aggressive states in the country when it comes to dealing with opioid abuse.

"There’s still much more we can do from education and prevention to treatment, and yes, where appropriate, prosecution, particularly for those dealing and enticing people into areas of addiction. But this is a comprehensive plan and it’s not over," Walker said.

Among several changes, the newly-signed legislation will ensure someone who overdoses would be immune from probation or parole revocation if he or she enters a treatment program, allow school nurses to administer overdose antidotes, and allow emergency and involuntary commitment for drug addicts.

The new bill also expands funding for Treatment Alternatives and Diversion programs, which Walker said will have a direct impact on local courts.

"It will give the judges in the system more options to help people with prudent diversions from going down the typical path of incarceration," Walker said.

The bills also create a grant program for hospitals to hire doctors who specialize in addiction and allocate more funding to mental health services in schools.