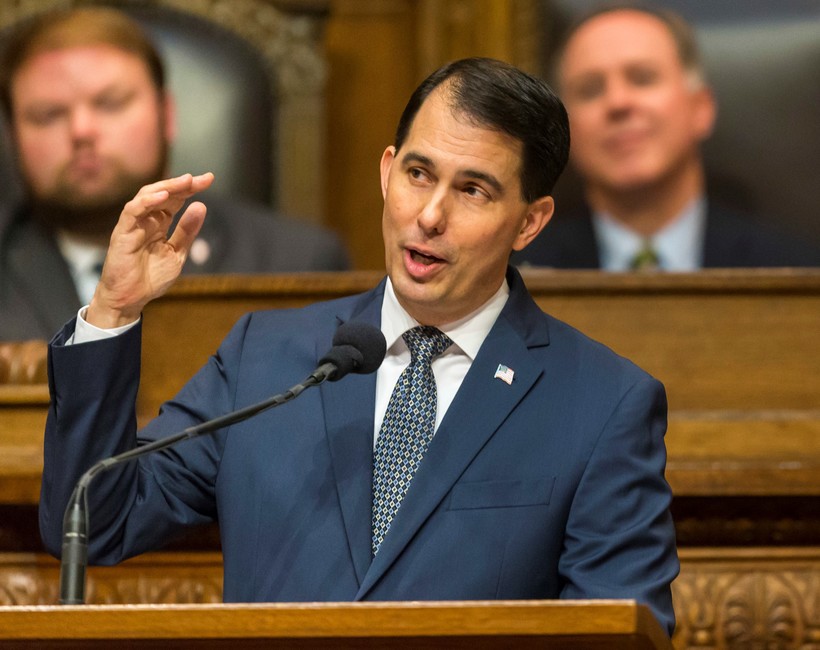 Wisconsin Gov. Scott Walker delivers his state of the state address to a joint session of the Legislature in Madison, Wis. on Jan. 10, 2017. Andy Manis/AP Photo

Walker Reaches Deal With Kimberly-Clark Worth Up To $28M

Wisconsin Gov. Scott Walker has reached a deal with consumer-products giant Kimberly-Clark Corp. worth up to $28 million over five years to keep a plant open and save nearly 400 jobs.

The deal Walker announced Thursday at the Cold Springs facility in Fox Crossing, near Neenah, was reached under powers Walker currently has but that would be taken away under a bill Republicans passed in a lame-duck session last week. Walker called for the bills Thursday from the Legislature, meaning he has six days to take action on them.

The deal with Kimberly-Clark is through the state's economic development agency. Under the lame-duck bill, the Legislature, not the governor, would have to approve such deals in the future.

"This is about a long-term commitment to this company, to this community, to this state, and I couldn't be more proud to be a part of it," Walker said at the announcement. "To me if there was any talk about a legacy, I want this to be my legacy. That we protected these kind of jobs, not as a handout, but because we knew if we invest in people like you, you won't let us down."

Walker made the announcement alongside company officials.

"Wisconsin has been an important home for Kimberly-Clark since 1872, and we are grateful for the many proactive efforts to create an economic situation that would allow us to keep the Cold Spring facility open," said John Dietrich, vice president of global manufacturing for Kimberly-Clark in a statement. "We look forward to continuing our 146-year commitment to making lives better for our consumers, and to continue being a strong corporate citizen in Wisconsin."

According to the statement released by the governor Thursday, the credits can only be earned if the company keeps all 388 employees through 2023 and makes at least $200 million in investments at the facility over the next five years.

Sen. Roger Roth, R-Appleton, has been pushing for a way to keep the company in Wisconsin.

"This is great news for the workers at the Cold Spring facility as well as the families, businesses and communities of the Fox Valley," Roth is quoted as saying in the statement.

After news broke of the deal, Democratic Gov.-elect Tony Evers again asked Walker to veto the bill that would prevent him from cutting certain economic development deals of his own in the future.

Evers said the governor "shouldn't be hamstrung when it comes to economic development" and called for Walker to veto the measure.

Evers said Republicans "played politics" with Kimberly-Clark for months. A larger tax incentive deal died after Republicans couldn't get enough votes to pass it in the Senate.

On Thursday, Walker claimed he didn't know of anyone who is opposed to the deal with Kimberly-Clark.

"I don't know of anybody who's objecting to this," Walker said. "If any body is against this, I have yet to hear about it. They might be using it for other political purposes to make points on it, but in terms of this deal for these employees for the impact on this community and on the state, I think it's pretty universal. People believe this is a good thing."

The Wisconsin announcement came on the same day that Kimberly-Clark announced it would close a facility in Arkansas that employs nearly 350 workers.

Editor's note: This story was updated at 5:31 p.m. Thursday, Dec. 13, 2018 to include additional comments from Gov. Scott Walker. Patty Murray contributed to this report.