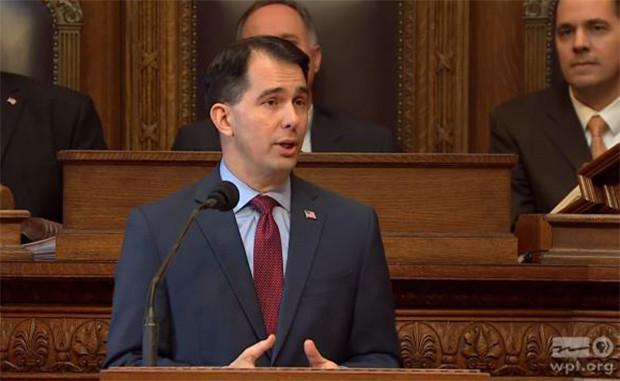 A screengrab of Gov. Scott Walker giving his 2017-2019 budget address Wednesday, Feb. 8, to a joint session of the state Legislature at the state Capitol in Madison, Wisconsin.

Gov. Scott Walker unveiled a two-year $76 billion budget Wednesday that laid the blueprint for his likely 2018 re-election campaign, calling for a new round of tax cuts and a tuition cut, along with increased spending on public schools and the University of Wisconsin System.

Walker would pay for the initiatives thanks for a variety of factors, including favorable revenue estimates, a projection by his administration that Medicaid spending will level out and a shift to self-insurance for 250,000 public employees in Wisconsin.

All told, his plan would increase state spending by nearly $586 million, leaving the state’s general fund with a balance of just $82.7 million dollars at the end of two years.

The 2017-2019 spending proposal could hardly be more different than the one Walker proposed shortly after taking office in 2011 when he called for a roughly $800 million cut to public schools and a $250 million cut to the UW System. By contrast, Walker’s latest budget proposal would increase school funding by nearly $650 million and boost state funding for the UW System by roughly $135 million.

"People tell us the reforms were necessary," Walker said in his prepared remarks. "Now, they want us to move ahead. And we listened. This budget moves Wisconsin forward."

Part of the spending would be contingent on whether the shift to self-insurance, which was approved earlier Wednesday by the Group Insurance Board, would yield actual savings.

In order to receive the new funding, schools would have to adhere to the Act 10 provisions.  That could potentially disqualify the Madison School District.

On top of the added spending, Walker’s two-year budget proposal includes a variety of tax cuts, including a $200 million income tax cut and a $22 million "Back to School" sales tax holiday.

The trick now for Walker will be getting his fellow Republicans to sign on. Despite growing their majorities in both the Wisconsin Senate and the Assembly, GOP leaders made it clear they had issues with the governor’s budget.

"Sometimes I think that folks forget, we are the co-equal of the governor," said Republican Assembly Speaker Robin Vos at a Wednesday morning meeting of the Wisconsin Counties Association. "He gets to put the budget out, but it’s not like we just salute."

Vos said Walker’s budget did not do enough to fix Wisconsin’s long-term transportation funding issues. While it would increase local road aid, it would delay some state projects and borrow roughly $500 million to close out a roughly $1 billion deficit.

"Gov. Walker has attempted to buy off local governments by saying we’re going to take from the fixing of the state highways by giving maintenance funding to local governments," Vos said. "It’s not a serious proposition, but he is attempting to make it serious. And that’s why I want you to not leave here thinking that you’re going to get this increase in your revenue without us having an increase in revenue at the state or some long-term plan that is not just going to cut our way into prosperity."

Vos said he was prepared to delay the budget’s passage until October if necessary, though he stressed that was not his preference. He also said he’s opposed to Walker’s plan to cut tuition by 5 percent for in-state UW System students, a cut Walker promised to backfill with $35 million in state aid.

Senate Majority Leader Scott Fitzgerald, who in his public remarks has aligned more closely with the governor in recent years, told the counties association he wanted to be sure the state could afford what Walker was proposing, noting the state Legislature’s nonpartisan budget office was only projecting tax revenues to grow by roughly 2.5 percent.

"I mean that’s good growth," Fitzgerald said. "It’s great. But it’s not off-the-chart growth. And as a result of that, we have to be cautious. We have to be sure we’re not doing something that we’re going to have to revisit two years from now or God forbid even less than that trying to piece something back together."

Democrats also attacked Walker for a lack of a long-term fix for transportation and said he shouldn’t get credit for funding programs today that he in some cases repeatedly cut.

"Gov. Walker’s last three budgets have done such lasting damage to our university system," said Stevens Point Rep. Katrina Shankland, one of four Democrats on the Legislature’s Joint Finance Committee. "It will take much more to repair than what he’s proposing today."

Senate Assistant Democratic Minority Leader Janet Bewley, of Ashland, said she would celebrate some pieces of the budget but said more needed to be done.

"What we’re hearing is the word 'reinvest,'" Bewley said. "Well you should have been investing all along."

"It seems that the press conclusion is that this is a re-election announcement for 2018," said Wisconsin Taxpayers Alliance Director Todd Berry. "Putting the politics aside, I think one could characterize it as sort of a restoration budget."

Jon Peacock with the Wisconsin Council on Children and Families said his group was pleased with many pieces of Walker’s budget.

"In many ways, those things like increasing funding for K-12 education are a departure from his previous budgets," said Peacock, a budget expert. "And for that we’re happy."

Peacock said he had more reservations about other pieces of Walker’s budget that would change the way the state administers the FoodShare program. One change would require parents of school-aged children to either work or participate in job training. If they don’t, they’d see their food stamp benefits cut off.

The governor’s office also announced for the first time that the governor’s budget would end Wisconsin’s prevailing wage for state projects and bar local governments from requiring union labor on public projects. GOP legislators have pushed both ideas as a means of reducing the cost of public construction projects. They’d be the latest in a long line of defeats for unions since Walker took office.

State lawmakers will spend at least the next several months debating the budget and putting their own stamp on the plan. The next fiscal year begins July 1, although if the Legislature has not passed a new budget by then, spending continues at the levels set in the current budget.