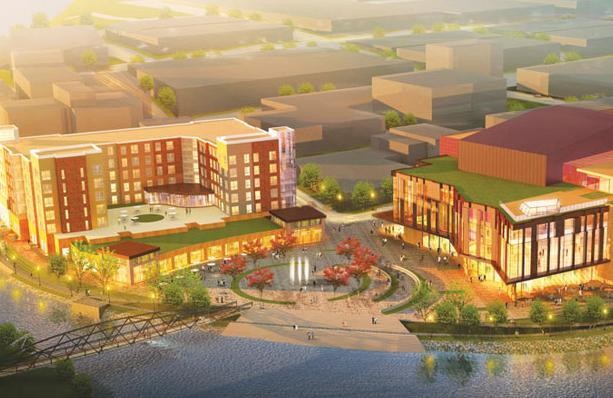 An artist's rendering of the Confluence Project. Photo: Commonwealth Development

State Will Withhold Money Until The Project Is Fully Funded
By Rich Kremer
Share:

Supporters of the Confluence Project in downtown Eau Claire were encouraged by comments Wednesday from Gov. Scott Walker. He said he would be setting aside $15 million in matching funds in the state budget for the proposed three-theater performing arts center.

Project supporters had sought $25 million, first from the University of Wisconsin System Board of Regents and later through what’s called a non-state agency grant. Walker said the money will come from General Purpose Revenue.

“And we won’t release those funds, not only until it’s matched but until the project itself is fully funded because we want to make sure that we use this as we have in the past as a leverage to raise the funds that are needed for a given project,” Walker explained.

The money was part of a campaign promise the governor made in Eau Claire last summer. Walker said if state finances improve more could be allocated to the Confluence.