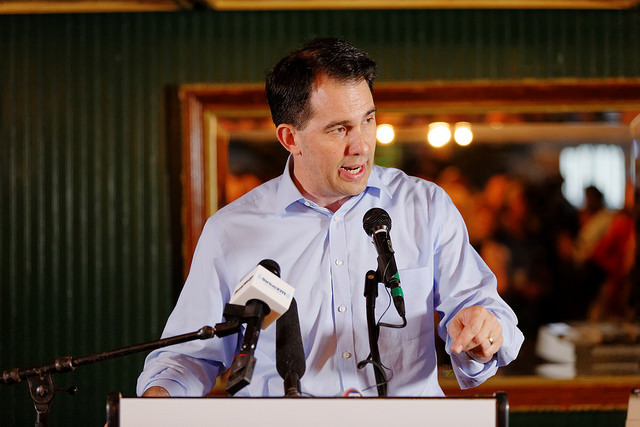 Gov. Scott Walker during a recent appearance at a political event in New Hampshire.

Stakeholders Have Been Working Out Financing Plan For Weeks
By Chuck Quirmbach and The Associated Press
Share:

Gov. Scott Walker says he will make an announcement Thursday afternoon on a financing deal regarding a proposed new Milwaukee Bucks arena.

Walker, team officials, and state and local Milwaukee government officials have been negotiating for weeks on a plan to pay for the arena in order to keep the NBA team in the state. The new arena would be part of a $1 billion development that also includes office space, restaurants and bars.

Walker told reporters in Waukesha Thursday morning that he remains convinced it's better financially for the state in the long-run if the Bucks basketball team stays in Wisconsin. He said he's open to the funding package being removed from the proposed state budget and voted on separately.

"From our standpoint we can deal with it either way. I had lengthy meetings yesterday with the Senate majority leader and the speaker of the Assembly about this, and you can imagine a multitude of other issues regarding the budget, And for us, whether it's in the budget or a separate piece of legislation, we're confident that we're willing to work with them," said Walker.

Many Republicans want to force Democratic lawmakers to take a separate vote on the arena funding.