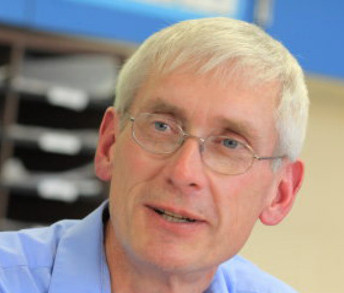 The candidates for State Superintendent of Public Instruction debated in Madison today in front of more than 200 school board members and administrators from around the state.

Pridemore and Evers were both asked if they support the Governor's budget which would hold education funding virtually flat, or if they would support an increase in per pupil spending - a plan being floated currently by some state legislators.

Pridemore says he supports the Governor's budget as is because times are still tight.

"Well, as much as I would like to put more money, more funding into the school aid formula, we really have to look at this situation more practically. The state is still trying to recover from a budget deficit. We are in bad economic times."

Evers has been vocal about his disapproval of the Governor's nearly $800 million cut to education in the current budget and he reiterated his calls for an increase in funding and a new funding system. Evers would like state spending to go up $225 per pupil.

"To go into a budget that has zero dollars for public schools and $1,400 dollars per pupil increase for voucher schools and private schools - that just doesn't compute to me as State Superintendent of Public Instruction."

Both candidates oppose Governor Walker's plans to create a new charter school oversight board. The election is April 2.