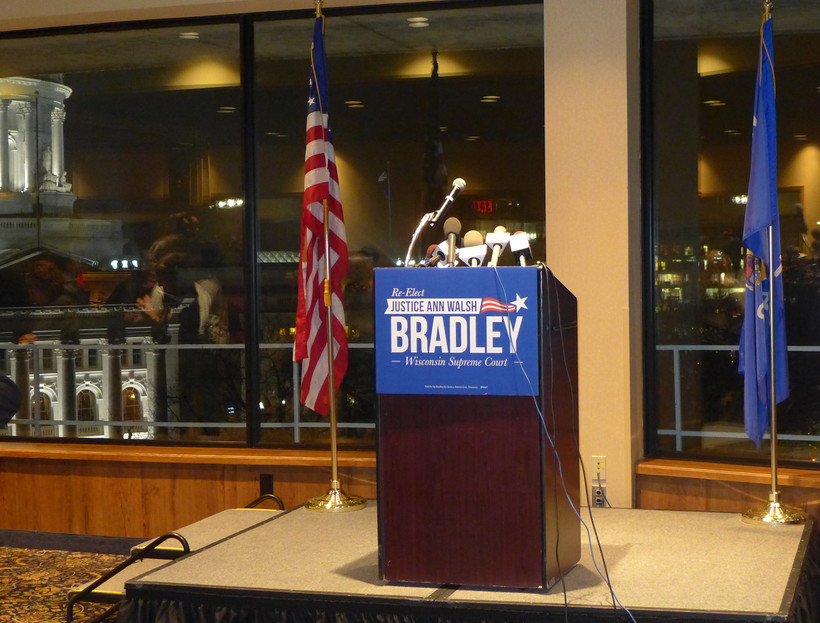 The scene before Bradley's victory speech on Tuesday.

Wisconsin voters chose Tuesday to keep the current makeup of the state Supreme Court but decided to change how the Court selects its leader.

Meanwhile, a statewide referendum to scrap the Court's long-standing seniority system passed, but by a much smaller margin.

The amendment to let the seven justices choose their leader, rather than have it be based on seniority, held a slight lead throughout Tuesday evening, finishing at with 53 percent in favor and 47 percent against.  The current seniority system has been in place for over a century.

But turnout was expected to be light with only two of 10 potential voters predicted to cast ballots in the off-year spring election.

Although officially nonpartisan, conservative justices hold a majority on the court, which in recent years has been at the center of some of the largest political fights in Wisconsin including upholding Gov. Scott Walker's law that effectively ended collective bargaining for public workers. Bradley and Chief Justice Shirley Abrahamson are considered the liberal minority on the seven-member court.

Daley described himself as conservative and he actively courted Republican voters in his campaign. Bradley accused Daley of politicizing the race, while he said Bradley should be removed because she is at the center of a dysfunctional court.

The four-justice conservative majority has bickered openly with Abrahamson and Bradley for years.

Emails emerged in 2011 that revealed conservative-leaning Justice David Prosser, a former Republican state Assembly speaker, used a derogatory term to refer to Abrahamson and vowing to "destroy" her. Prosser acknowledged to police that he wrapped his hands around Bradley's throat after she charged him during an argument in chambers .

Steve Hegge, a 63-year-old retired accountant from Sun Prairie, said he voted for Daley because Bradley is too political and her close association with Abrahamson proves she's a liberal.

"It wasn't what appealed to me (about Daley). It was what didn't appeal to me and that was her,'' Hegge said. "Politics shouldn't play into the Supreme Court and that's what she's doing."

John Czaplewski of Madison said he voted for Bradley precisely because she's liberal.

"She's part of a strong but diminishing block of the Supreme Court that we need to maintain," Czaplewski said.

The constitutional amendment that passed Tuesday could also lead to the removal of Abrahamson as chief justice, a position she's held since 1996. The amendment, put on the ballot by the Republican-controlled Legislature, requires the seven justices to decide every two years who they want to lead the court. The position currently goes to the most senior member.

Abrahamson, 81, has been on the court since 1976 and is now expected to be replaced as chief justice by one of the four conservative justices.

Supporters, including the state chamber of commerce, which poured at least $600,000 into an effort to get the amendment passed, said it's undemocratic to have the position go automatically to the justice with the most experience. Only six other states use the same system, while 22 others have a peer selection process.

Scott Manke, a 44-year-old engineer from Sun Prairie, said he voted for the amendment because seniority doesn't always equate wisdom.

"The time you've been sitting in the seat doesn't necessarily qualify you as the best person," Manke said.

Greg Packnett of Madison voted against the amendment, calling it a clear partisan attack on Abrahamson.

"The fact that they wouldn't be willing to grandfather her in, or I guess grandmother her in, it's shenanigans," he said.

Liberal advocacy group the Greater Wisconsin Committee was working to defeat the amendment and Daley.

Still, this year's Supreme Court race was the quietest of the past six contests dating back to 2007, which marked the beginning of large spending by outside partisan interests in Wisconsin judicial races.

Daley ran no television ads in his race and no outside group ran spots to bolster his campaign.