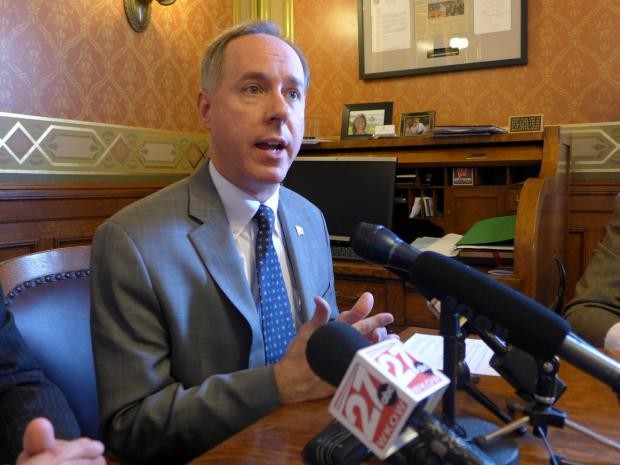 Move Is 1 Of Several Republicans Are Considering That Would Limit Evers' Power Before He Takes Office
By Shawn Johnson
Share:

Assembly Speaker Robin Vos said Monday that GOP lawmakers would consider changing the makeup of the Wisconsin Economic Development Corp.'s board in order to limit the power of Gov.-elect Tony Evers.

While Vos, R-Rochester, said nothing was final, he told reporters that the move was aimed at preventing Evers from undoing agreements that were struck over the course of eight years between Republican legislators and outgoing Republican Gov. Scott Walker.

"We have a board that Tony Evers has already said he does not support, so I'd like to make sure the people who are on the board support the organization," Vos said.

Evers said during his campaign for governor that he supported eliminating WEDC, a quasi-private agency that has been the subject of multiple critical audits. WEDC is also the agency that finalized Wisconsin's contract with Foxconn, a top priority for Vos.

Walker created the agency as one of his first acts in office in 2011, and under its current makeup, the governor's appointees set the tone for the agency.

Asked Monday whether he was considering removing gubernatorial appointments from the board, Vos said Republicans were still discussing their options.

"We haven't gotten to that level of detail, but it's just the general idea," Vos said. "It might be adding more appointments than just taking some away."

Vos said Republicans were not considering changes that would affect who Evers can appoint to the University of Wisconsin System Board of Regents or the Wisconsin Natural Resources Board. Any changes before Evers takes office would need Walker's approval.

Democrats have pushed back against GOP efforts to weaken the governor's office before Evers takes over, and they did again Monday after Vos' latest remarks.

"Republicans are so desperate to cling to control, they'd rather eviscerate constitutional checks and balances and the separation of powers than work together with Gov.-elect Evers on the pressing issues facing our state," said Britt Cudaback, Evers' deputy communications director. "The people of Wisconsin said loud and clear last week that we want a change from this petty, divisive partisanship, and Gov.-elect Evers believes Republicans should stop any and all attempts to override the will of the people and instead focus on solving the problems of this state."

Also Monday, Republicans unanimously re-elected Vos as speaker after they won 63 out of 99 Assembly districts in November's election, a loss of only one seat.

Vos told Assembly Republicans that they would make sure the state won't go backward.

"We are not going to roll over and play dead like they assume we probably should," Vos said.