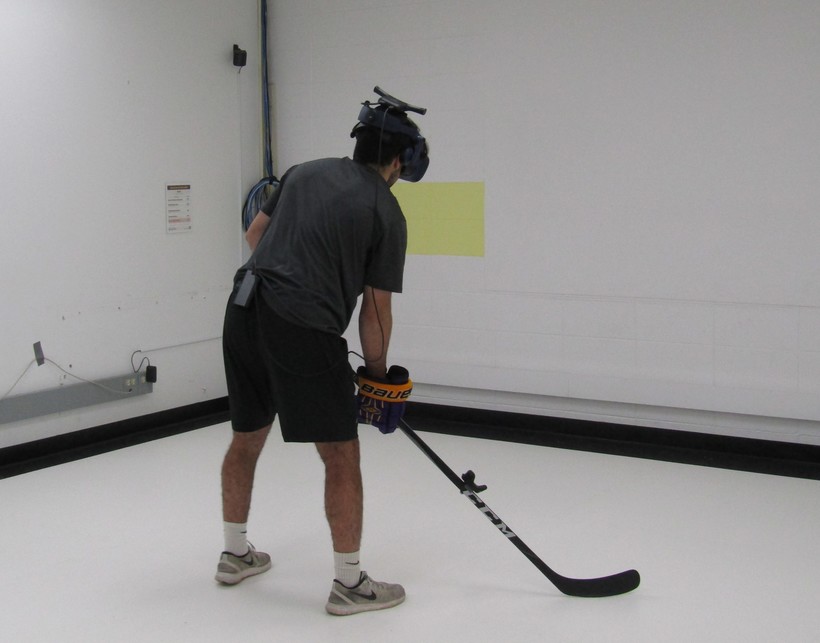 Tristan Conrad is honing his hockey skills. The junior men’s hockey player at the University of Wisconsin-Stevens Point has a stick in his hands and he’s batting away pucks and avoiding defenders — but not on the ice. He’s facing the wall in an empty room, wearing a virtual reality headset.

Conrad is part of a new research project focused on improving players’ cognitive skills, such as reaction time and peripheral vision. The system that he’s training on is called the Sense Arena System, and it's brand new to UW-Stevens Point as part of a partnership between the university and Charles University in the Czech Republic. Researchers said they hope it helps improve the players’ hockey performance and reduce on-ice injuries.

About 35 members of the men’s and women’s hockey teams are participating in the research, which is a project of the school’s new graduate program in athletic training. The players started last week performing tests of basic hockey skills, both on the ice and in virtual reality. Those measurements will form the baseline for the study.

For the VR training, the players stand on a synthetic ice surface in front of motion sensors. Their hockey sticks have motion sensors, too, plus haptic technology that simulates the feedback they get when the puck hits the stick. It’s an 11-week training course.

Emily Miller, a graduate student at UW-Stevens Point who is one of the students running the experiment, said working in virtual reality allows the program to target cognitive skills more specifically than traditional hockey practice would do.

"It helps isolate just the brain training, as opposed to having all the physical (objects) around them as well," Miller said.

Among the brain training Miller and her research partner will be tracking players’ ability to react and recognize objects quickly, their awareness of their field of peripheral vision, and their ability to track multiple objects at once. The on-ice component of the research will help show whether the players’ VR training actually translates into their performance in the real world.

"We’re hoping that the players that are going through the training system are going to improve in all those areas," Miller said.

As the technology has advanced, VR training has become more common in professional sports and in some college programs. Holly Schmies, UW-Stevens Point's athletic training program director, said this research project is just the beginning of potential applications of VR training. She hopes to see it applied to other athletic programs, and potentially to cognitive training outside of sports, too.

For Conrad, his first time in the VR system took some getting used to. For one thing, he said, there’s no way to read a defender’s intentions when the defender is just a pixelated cartoon figure. And the puck is a lot heavier on the ice.

"Catching a pass on the ice, you can feel a lot more of the puck," he said. "With this, there’s really no weight, so it’s hard to adjust."

But he had fun, he said, and he’s up for using the system to improve his skills.

Miller said even if the project shows gains in players' cognitive skills, a single season won’t be enough to draw firm conclusions about whether the training is effective in reducing the number of concussions or other injuries in players. But she hopes that over a longer period of time an increased focus on brain training might have that impact.