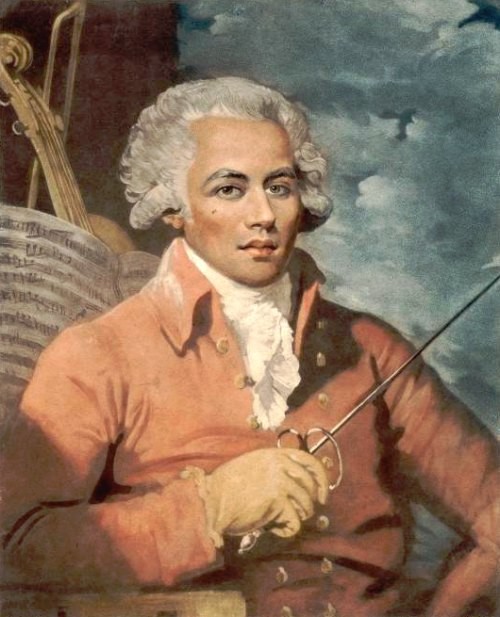 He was a composer and one of the finest violinists of the 18th century, but the times he lived in forced  Joseph Boulogne to set aside music and embrace revolution.

He was the son of a French government official and an African woman from the Caribbean island of Guadeloupe.  For a time the family lived in Haiti then, when Joseph was about 10, his life took a sudden turn when they moved to Paris.

Young Joseph became skilled in all the pursuits of a gentleman--riding, dancing, swimming, and skating.  He developed into one of the most adroit swordsmen in Europe.

Although he may have begun studying the violin with his father's plantation manager, Joseph now moved in high musical circles, and by 1769 was performing as an orchestral violinist under the direction of the famous Francois Joseph Gossec. In 1772 he made his debut as a soloist performing his own violin concertos.  The violin parts required spectacular virtuosity, but Joseph Boulogne impressed his audiences most with the sensitivity and expressiveness of his playing.  Within a year he was director of one of the finest orchestras in France.  In the 1770's he continued to compose.  His string quartets were among the first written in France.

The 1780's were not to be so auspicious for music making.  When the French Revolution broke out in 1789 Joseph Boulogne--now known as Chevalier de Saint-Georges--sided with the young Republic and assembled a military force in northern France.  In those unsettled times he was wrongly accused of misspending money supplied to his troops, was relieved of his command and imprisoned.

As soon as he was released he set out for his old home, Haiti, [then known as Saint Domingue,] where a slave rebellion had erupted.  By the time Saint-Georges returned to Paris in 1797 he was ready to resume music-making, but two years later he would die almost penniless, having given most of his resources to the cause of revolution.