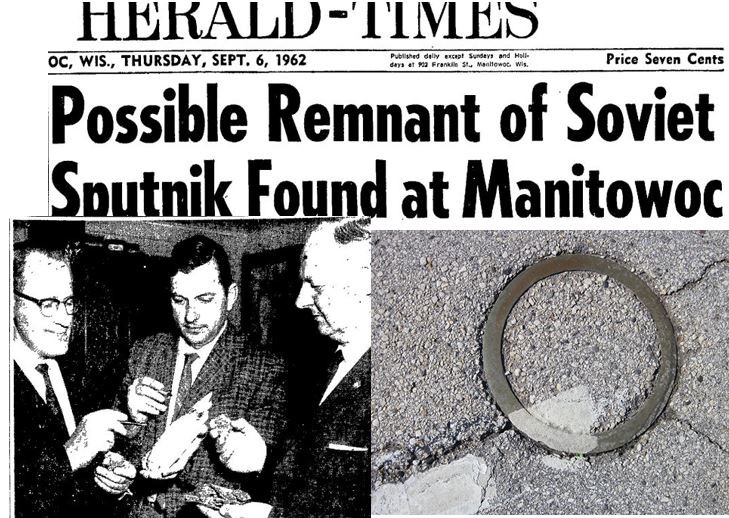 Vintage Wisconsin: When A Piece Of Sputnik IV Fell In Wisconsin

On Oct. 4, 1957, the Soviet Union kicked off the Space Age with the launch of the world's first satellite, Sputnik. Five years later, on Sept. 6, 1962, a 20-pound chunk of another Sputnik spacecraft, Sputnik IV, crashed in Manitowoc.

Sputnik, the Russian word for "satellite," circled the Earth at 18,000 mph, completing a round trip every hour and 36 minutes. Its purpose was to study Earth and the solar system, but, this being the Cold War, many Americans feared more sinister uses for the technology. The craft sent radio signals back to Earth strong enough amateur radio operators could pick up and listen as the beeping craft passed overhead several times a day.

Sputnik's orbit started to deteriorate in January 1958, and, as expected, the spacecraft burned in the atmosphere.

Sputnik's launch caught the United States off guard, and the government and scientific community banded together to catch up with the Soviet technology. The Soviets kept launching satellites. Number four went up in May 1960.

On Sept. 6, 1962, two Manitowoc police officers on patrol supposedly spotted the piece of metal in the street but thought it was cardboard. When it was still there a few hours later, they looked closer and discovered it was metal and too hot to touch.

Local metal experts from a foundry and shipyard were called to examine the chunk. With reports of Sputnik IV's break up, the Manitowoc chunk was forwarded to the Smithsonian-Harvard Center for Astrophysics analysis and confirmation of its identity as Sputnik IV.

Several cities fought to house the chunk, including Waukesha, Green Bay and Milwaukee. An attempt to return the chunk to its owner was initially rebuffed by the Soviets who called the effort a "circus trick" but they eventually agreed to accept what was left of their spacecraft.

All that remains of the satellite in Manitowoc is a ring in the road, marking where the chunk was found, and a replica of the debris. Since 2008, the city has celebrated the event with Sputnikfest.