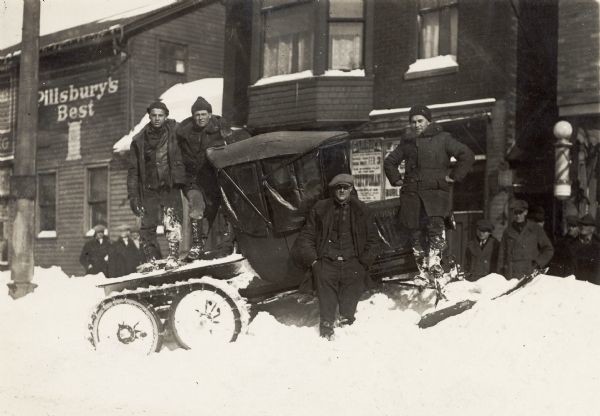 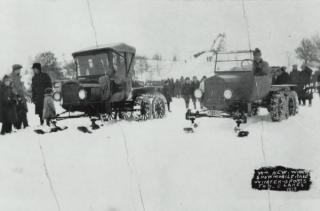 Wouldn’t it be nice if your car converted to a sled for easy winter driving? At one time, it did, with a special sled attachment for the Ford Model T.

In the above image, Harold O. Hornburg and some friends attempted to make the trip from Hartland to Milwaukee in their Snow Flyer during a heavy snowstorm in 1925. Even though the vehicle looks beached on the snow bank, Hornburg reported that they made it.

The idea for the car-sled came from Virgil D. White. He patented an attachment to convert a Model T into a “snowmobile” (he copyrighted the name) in 1917. The attachment consisted of metal and wood skis that attached to the front, and a rear-mounted track like the tread of a tank. They first went on the market in 1922 and soon became indispensable gear for country doctors, mail carriers, fire departments, traveling salesmen, milkmen, and anyone else needing dependable transport in all kinds of weather.

Wisconsinites had experimented with ways to traverse snow since the 19th century. Some put runners on bicycles and attached steam power to sleighs.

In 1925, Farm Specialty Manufacturing Company of New Holstein purchased the rights to White’s design and began marketing its own version known as the Snow Flyer. The first race of these converted Model T’s was held in 1926 at Three Lakes. William Neu beat out 104 competitors to win.

Carl Eliason of Sayner developed the modern snowmobile (known as a motor toboggan) in the 1920s, working on his model in a small garage behind his general store. He patented his design for an engine attached to a long sled with skis in 1927, but he kept experimenting and refining his machine over the next few years. He produced about 40 machines, each a little different, until a large order for 200 units led the Four Wheel Drive Co., of Clintonville to take over production. The company continued to produce snowmobiles until the 1960s.