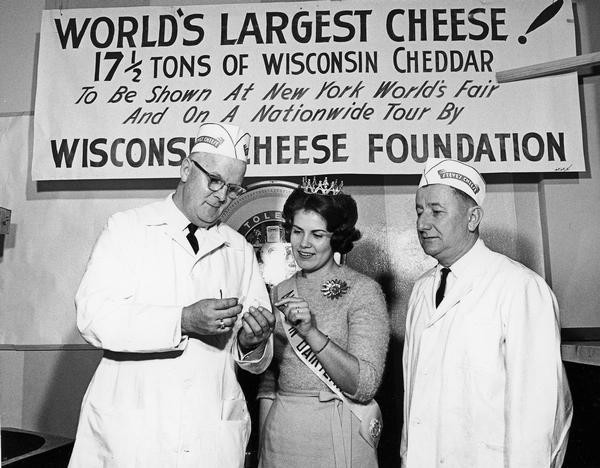 In the above image, Alice in Dairyland (Beth Bartosh) samples Wisconsin's special contribution — a giant block of cheese — to the 1964/1965 New York World’s Fair with some of the employees who helped in its creation.

For more than a century, world’s fairs attracted millions of visitors with visions of the future and displays of the wonders of the world in special pavilions and exhibitions.

So it is perhaps no surprise that Wisconsin chose to showcase the world’s largest cheese at the New York World's Fair. The cheese — a cheddar — was produced by Steve’s Cheese in Denmark, Wis., from 170,000 quarts of milk. It took more than 43 hours to make, and when finished on Jan. 22, 1964, weighed in at 34,591 pounds.

Not content with a simple display at the fair, the massive cheese went on tour on a special tractor-trailer dubbed the “Cheesemobile” between the two seasons of the fair. The vehicle also contained a display about dairy. The cheddar returned to New York in April 1965.

Most people could only gawk at the huge cheese. Samples were reserved for VIPs like Alice in Dairyland. After the fair, the cheese was purchased by the Borden Company, and devoured at the annual meeting of the Wisconsin Cheesemakers Association in Eau Claire in 1965.