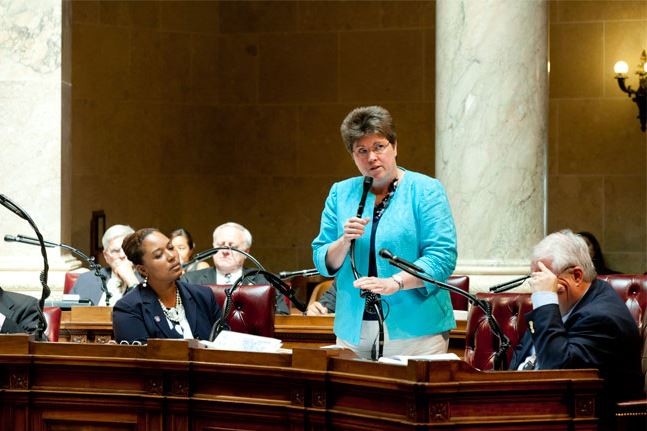 Vinehout 'All In' When It Comes To Replacing Walker As Governor

Democratic state Sen. Kathleen Vinehout, D-Alma, said she's "all in" when it comes to beating Gov. Scott Walker in next year's election.

Vinehout won't run for a fourth Senate term and may get into farming full-time at her family's farm if she doesn't take the governor's office.

Vinehout won a tight race for the 31st Senate seat in 2006 and has been there ever since. On Monday, she entered a crowded field of Democrats hoping to unseat Walker next November.

Vinehout said her campaign platform is about turning the state's priorities "upside down," and returning power and funding to local governments, which she argues has the most impact in the lives of citizens.

"I want to make people the top priority when it comes to spending state dollars; and when I think about what the tomorrow I see looks like, it’s very different from what I see today," Vinehout said.

She said the $3 billion incentives package Walker and state Republican leadership offered to Taiwanese manufacturer Foxconn is an example of money that could have been better spent investing in local communities. Vinehout points to public-private partnerships such as Eau Claire's Confluence Performing Arts Center as better ways for state dollars to spur growth in cities across the state.

"All of these cultural and recreation and education amenities are the very things that the state needs to be funding and have gotten cut at the same time that the governor and the majority of the Republicans have put hundreds of millions into tax breaks for select companies," Vinehout said.

This is Vinehout's second run for governor. In the 2012 recall of Walker she lost a primary to fellow Democrat Mary Burke. Because her state Senate seat wasn't up for two more years, Vinehout was able to run and win her current term.

"But in 2018, my seat will be up, so that means I’m throwing in everything I’ve got, and I’m going to do everything I can to make this work," Vinehout said.

Vinehout said if she can't beat Walker next year, she'll take a break from the state Legislature.