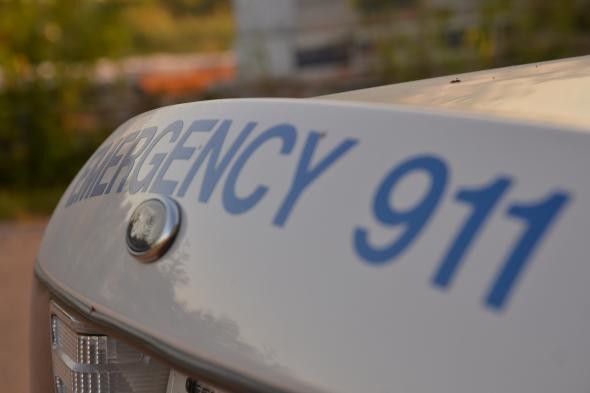 Detective, Lawyer, 2 Bank Workers Identified As Those Killed
By Andrea Anderson and The Associated Press
Share:

At a press conference Thursday afternoon, an emotional Everest Metro Police Chief called the detective killed in a series of shootings Wednesday in northern Wisconsin a "phenomenal officer."

"Jason was a phenomenal officer and he was part of our family, so it's difficult," said Chief Wallace Sparks on Thursday before becoming too emotional to continue and leaving the podium.

Authorities on Thursday identified the four people killed in three shootings Wednesday that stretched across three communities as a detective, a lawyer and two bank workers.

A 45-year-old male suspect is in custody at a local hospital after suffering nonfatal gunshot wounds following a standoff at an apartment complex in Winston, said Jason Smith, a deputy administrator for the Wisconsin Department of Criminal Justice's Division of Criminal Investigation, at the Thursday press conference.  The man is the only person of interest.

Some details were released at the press conference, but many questions remain unanswered as the DOJ and its DCI work with other law enforcement agencies to investigate the shootings that began Wednesday afternoon and ended that evening.

More than 100 law enforcement officers from across the state responded to the string of shootings, with many working through the night to process crime scenes and conduct interviews.

The shootings began Wednesday afternoon in the small town of Rothschild after police were called at about 1:30 p.m. to a domestic situation at Marathon Savings Bank. The first shooting happened at the bank, where police said previously they arrived to find two people with gunshot wounds and the suspect gone. Rothschild is about 90 miles west of Green Bay.

The suspect was already on route to a law firm in nearby Schofield when police arrived at the bank. The suspect then went to an apartment complex in Weston, where Det. Weiland was killed setting up a perimeter and the suspect taken into custody.

Law enforcement were in "constant contact" with the suspect at the apartment complex, but Marathon County Sheriff Scott Parks could not give an exact timeline of events at the apartment, citing the pending investigation and interviews that have yet to be complete.

WSAW-TV reported about a dozen gunshots were heard outside the complex at about 5 p.m. Wednesday. Authorities announced around 8 p.m. that four people had been killed and a suspect had been taken into custody.

A DOJ press release states, "after a few hours of negotiation, the suspect exchanged gun fire with responding officers and was injured."

After suffering nonfatal gunshot wounds, the 45-year-old was taken to a local hospital where he remains in custody, Smith said, and has not been interviewed by law enforcement.

The two officers who shot the suspect — one from the sheriff's office and the other from Everest Police — are on paid administrative leave pending an investigation by DCI, as is standard procedure, according to the release.

Smith stressed the events were the result of a domestic violence incident "that evolved into tragic crimes" that spread throughout the communities. No other individuals were injured.

A local business manager previously told WPR that a woman ran inside the Subway located in the same minimall as the bank Wednesday claiming her husband was trying to kill her.

Gov. Scott Walker issued a statement Thursday morning, calling the events tragic and sent his condolences to the families of the victims and impacted communities. Walker also tweeted a message to the Everest Metro Police.

Tonette and I send our prayers to the family of Detective Jason Weiland, Everest Metro Police Department & to all law enforcement in WI.

Weiland, 40, was a 15-year veteran of the Everest Metro Police Department, with experience as a field training officer and member of a task force for internet crimes against children. His career included working as a narcotics detective for the Marathon County Sheriff's Department, and as a police officer with Marathon City and a corrections officer with Marathon County, according to his LinkedIn page. Weiland was a devoted Green Bay Packers fan and is survived by his wife and two children.

The 67-year-old graduated from D.C. Everest High School and had two children. Look met her husband, Robert Look, while working at a bank in 1988. The two married in 1992 and lived in South Dakota before returning to Wisconsin in 1998. The couple celebrated their 25th wedding anniversary on Valentine's Day. She had been a branch manager at Marathon Savings Bank since 1998.

Barclay, 62, was killed along with Look at Marathon Savings Bank. Her former husband, Glenn Barclay, said she was the mother of a 28-year-old daughter and grandmother to two children ages 4 and 7. Karen Barclay was a dedicated employee, mother and grandmother, her ex-husband said. "Pleasant to everybody she met. Didn't have a mean bone in her body," Glenn Barclay said.

An attorney, Quirt Sann, 43, had been a lawyer since 2011, according to her LinkedIn profile. Previously she worked as a manager for Wausau-based Quirt Family Dentistry from 2007-2012. Her LinkedIn profile also says she graduated from the Valparaiso University School of Law in 1999 and from the University of Wisconsin-Madison with a journalism degree in 1996. Court records show she served from time to time as a guardian ad litem in divorce and child support cases, watching out for the interests of the children in those proceedings.

The series of events led schools in the D.C. Everest School District and Aspirus Wausau Hospital to be placed on lockdown for a period of time Wednesday. Businesses affected by yesterday’s events are closed until further notice.

A candle light vigil will be held in honor of the victims at 7 p.m. Sunday at the Everest Metro Police Department, 5303 Mesker St., Weston.

Editor's Note: This story was last updated at 4:58 p.m. to include information from the Thursday press conference.