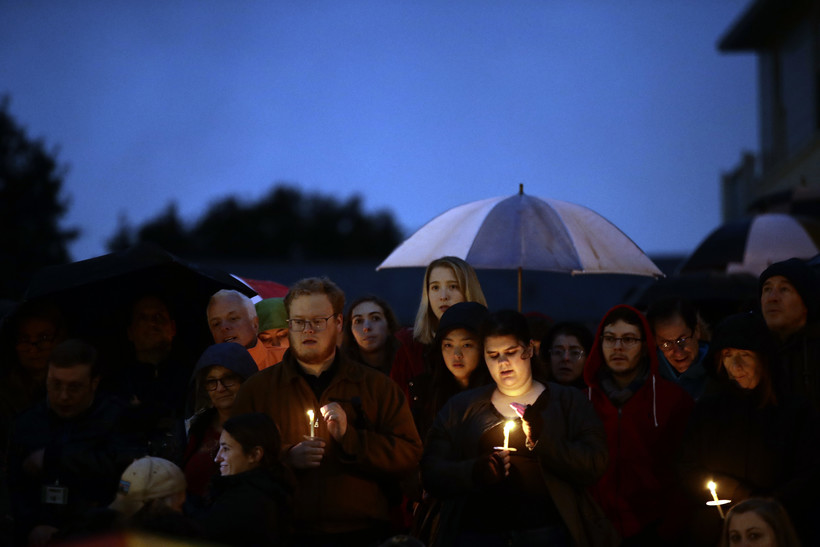 People hold candles as they gather for a vigil in the aftermath of a deadly shooting at the Tree of Life Congregation, in the Squirrel Hill neighborhood of Pittsburgh, Saturday, Oct. 27, 2018. Greg Schneider, executive vice president the Conference on Jewish Material Claims Against Germany says the key to combatting antisemitism is education about the Holocaust. Matt Rourke/AP Photo

Reports of antisemitism in Wisconsin remain near record-high levels in a trend advocates call "very concerning."

An annual audit released Thursday by the Milwaukee Jewish Community Relations Council found 95 reported incidents of antisemitism in 2021, just a 4 percent decrease from 2020’s record-high of 99.

"This is all very concerning because whenever we see these sorts of incidents it can lead to violence," said Kai Yael Gardner Mishlove, director of the Milwaukee Jewish Community Relations Council. "It invokes fear within our Jewish community and also it makes our society in general very unsafe. We're finding that whenever there's hate directed at one group, it often is directed at other groups, too."

Despite the small decrease over the past year, Gardner Mishlove said the general trend in recent years has been a marked increase in antisemitism in the state. Since 2015, the number of incidents has grown by 459 percent.

The 2021 audit found an 80 percent increase in antisemitic incidents at middle and high schools since last year. Incidents range from Holocaust jokes to harassment of Jewish students in the form of antisemitic and racist graffiti, gestures and social media posts.

Gardner Mishlove suspects the increase in incidents is due to schools reopening after pandemic closures, noting it may be part of a larger trend of school violence as students struggle to readjust to in-person learning.

But during the same timeframe, antisemitic incidents on college and university campuses decreased by 42 percent. Gardner Mishlove again attributes the change to the pandemic — saying more campuses offering online classes, and an overall decrease in enrollment at some campuses, could explain the decline in incidents.

But one of the most troubling findings, Gardner Mishlove said, is a 46-percent increase in COVID-19 and pandemic-related conspiracies and comparisons. This includes things like state legislators comparing the COVID-19 pandemic to the Holocaust and conspiracy theories blaming Jewish people for the pandemic.

"What's dangerous about this is it's ... evoking old tropes of Jews being responsible for whatever ill exists in society," Gardner Mishlove said.

Kenosha is one of many cities where antisemitic flyers have been circulating that frame vaccines and the pandemic as the "Jewish agenda."

"That's very dangerous to think that you may be the daughter or the son of a Holocaust survivor, and you walk out to your driveway, and you're seeing this flyer," Gardner Mishlove said.

She added that the number of incidents is likely underreported. Each time the council publishes the annual audit, Gardner Mishlove said it receives a wave of communication from individuals who were not aware they should be reporting these kinds of incidents.

"I think the call to action for all of us is to speak out whenever we hear or see antisemitism or any form of hatred or bigotry. An offense to one is an offense to all," she said.

Whether you are a victim of or witness to an act of hatred, you can report it online, by calling 414-390-5736 or by emailing jcrj@milwaukeejewish.org.

"We also recognize that many folks sit in multiple communities," Gardner Mishlove said. "A person who is Jewish may also belong to another marginalized group, and vice versa. So that's why it's so important for us to all work together to unite, to strengthen and support each other."