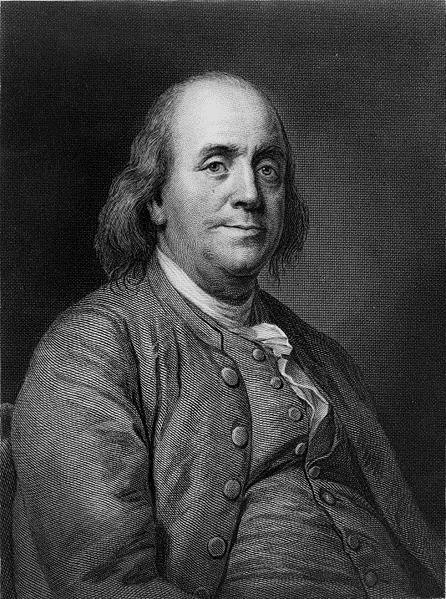 The string quartet is a curiosity, a series of short dances for three violins and cello to be played on open strings.  It’s attributed to Benjamin Franklin, and since he was so versatile, it’s tempting to assume that Franklin would also turn his attention to composing music.

Franklin played the harp, the guitar, and something called the glass dulcimer, but his best known contribution to music was his improvement of the so-called musical glasses.  The instrument had become popular in Europe by 1746, when Christoph Willibald Gluck performed in London a “concerto on 26 drinking glasses tuned with spring water,” accompanied by an entire orchestra.

In 1762, during a sojourn in London, Franklin described in a letter his improvement of the musical glasses by fitting glass bowls concentrically on a horizontal rod, which was turned by a crank attached to a pedal.  The turning of the bowls kept them moist by passing them through water, and enabled the performer to stroke their rims with a minimum of motion.  Franklin’s new instrument, which he called  the armonica, was fairly popular in America, but quite the rage in Europe.

A few years later, in a letter to a friend in Edinburgh, Franklin wrote a short treatise on music theory, setting down his ideas about the nature of melody and harmony, and in a letter to his brother Peter he favored clarity and simplicity in vocal music and took issue with the relatively intricate arias of recent operas and oratorios in the Italian style.

The intriguing string quartet attributed to Franklin probably says a good deal less about his musical tastes.  The manuscript, with Franklin’s name on it, was discovered in Paris in the 1940s, but, since then, copies have turned up in Prague, Vienna, and elsewhere, each attributed to a different prominent composer of the time. It’s quite possible that the scientist, statesman, and inventor was simply too busy to write music.