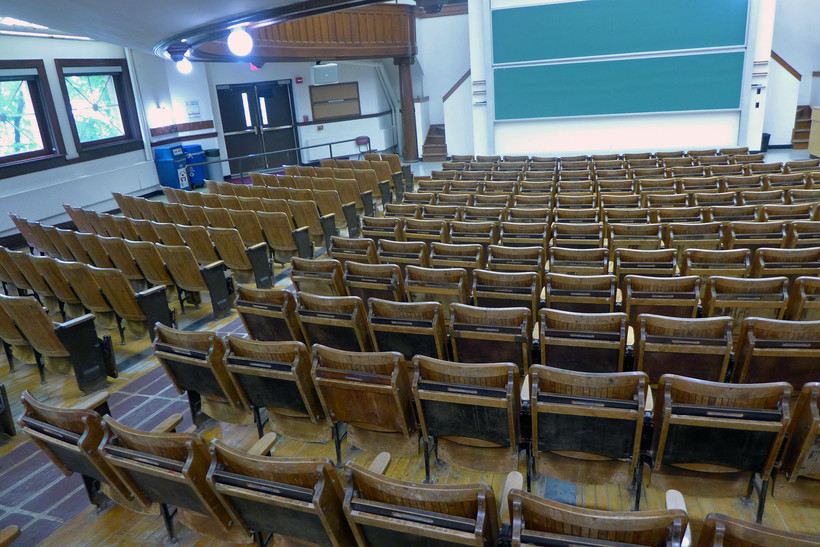 UW System officials want the state to approve $38 million to modernize classrooms on campuses around the state. This 116 year old classroom in Agriculture Hall on UW-Madison's campus is used for large enrollment classes in key areas like biochemistry, nutritional science, math and economics. Shamane Mills/WPR

Republicans Have Expressed Concern Over Scope Of Projects And Level Of Borrowing
By Shamane Mills
Updated:
Tuesday, June 4, 2019, 3:20pm
Share:

University of Wisconsin System officials held a press conference in a more than century-old lecture hall on the UW-Madison campus Tuesday in an effort to drive home their push for more funding in Wisconsin's capital budget.

Gov. Tony Evers' capital budget called for more than a billion dollars for UW System building projects across the state, including at campuses in Milwaukee, La Crosse, Eau Claire, River Falls and Madison.

"Our focus is on repair, renovate and replace," Cross said. "That’s our focus. And we’ve got this whole capital request focused almost exclusively in those areas."

"Our vet med school hospital currently serves three times the number of clients that it was designed to accommodate," said Blank. "The current facility does not meet the needs of users. We’re committed to raising one third of the cost of vet school renovations from private donors and we’re asking the state to help pay the remaining two thirds."

In March, the State Building Commission rejected every building project in Evers’ $2.5 billion capital budget, citing concerns about its scope and level of borrowing.

A large portion of those projects would go to the UW System. Despite the vote, state lawmakers will still have a chance to approve all or parts of the governor's plan.

Cross conceded the capital budget is "historically large" but said now is the time to repair and renovate aging classrooms and buildings. Of which he noted 60 percent are between 40 and 75 years old.

"Without a strong capital budget we increase risks to safety and if you go into some chemistry labs and see the ventilation you understand," he said.

The Legislature’s budget-writing committee hasn't taken up the capital budget yet. But last week Republicans on the Joint Finance Committee rejected Evers' proposed $130 million state funding increase for the UW System, a move that Cross likened to a kick in the shins.

Editor's note: This story was updated with original reporting by WPR staff. Wisconsin Public Radio is a service of the University of Wisconsin-Madison and the Wisconsin Educational Communications Board. WPR headquartered at Vilas Hall.