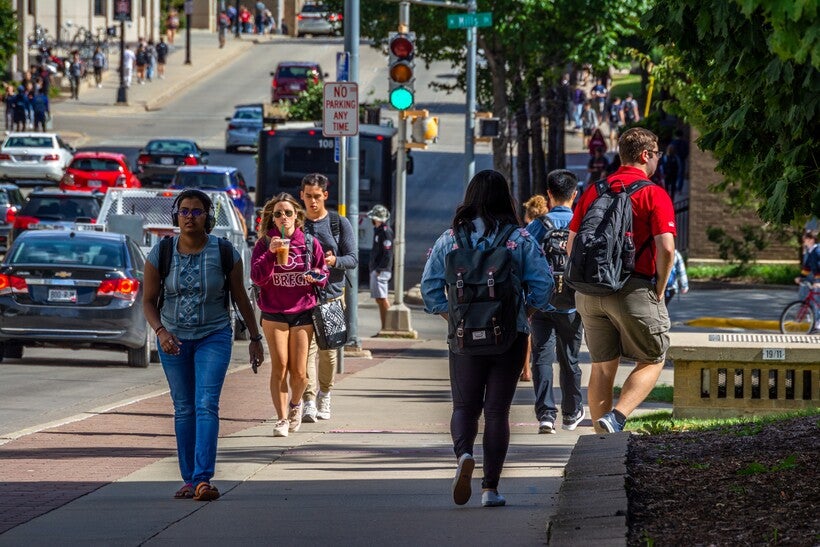 Students walking along Johnson Street on the University of Wisconsin-Madison campus. Bill Martens/WPR

The University of Wisconsin System has released data showing UW graduates earn a median salary of nearly $50,000 a year after graduation.

The analysis includes employer-reported data for 12,000 bachelors degree recipients graduating in 2014, 2016 and 2018. The data comes via employment verification data provided by Equifax. UW System officials tout the analysis as a "first-of-its-kind study of outcomes for graduates across the state's 13 universities, which cost $267,000.

Overall, the UW's central office said median earnings increase to more than $66,000 for graduates five years after getting their degree. Wages vary by field with graduates working in science, technology, engineering and mathematics fields generally making more than those entering liberal arts or social science fields.

UW Board of Regents President Drew Petersen said the data provided by the UW shows students graduating from the state's universities have "tremendous lifelong earning potential."

"I think as we're building and increasing the Wisconsin workforce, one of the best items coming out of this report is that 90 percent of Wisconsin system graduates stay in state to raise their family to work and build a livelihood," said Petersen. "What's also impressive is that 15 percent of out-of-state students remain. And I think collectively, that's why the Wisconsin economy pre-pandemic was doing so well."

The analysis comes as the UW System is facing unprecedented financial challenges caused by students moving off campus due to the COVID-19 pandemic, along with a seven-year freeze on undergraduate tuition increases at state universities mandated by the state Legislature and an 11-year freeze at the state's two-year campuses.

As the UW System crafts its next annual budget proposal, Petersen said the graduate outcomes data will help regents and administrators make the case for continuing to invest in state higher education.

"There's too much at stake, as evidenced by today's report, for us to be complacent on the resources we need to deliver the quality of education our students and parents expect," said Petersen. “We've got to be aggressive about finding and growing our funding sources."

A UW System press release about the graduation outcomes notes this will be the first in a series of data releases made available over the coming months.