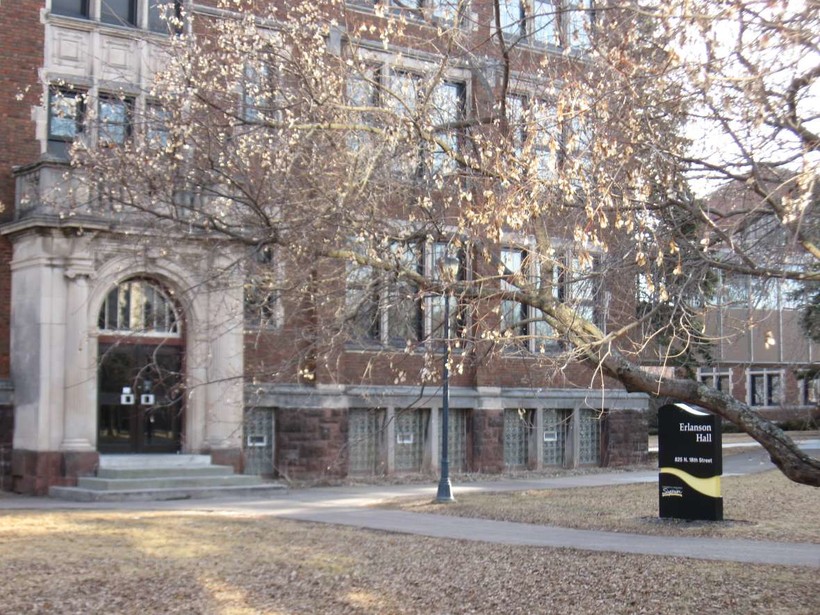 Erlanson Hall on the University of Wisconsin-Superior campus

Faculty Say They Were Not Consulted Before Programs Were Suspended
By Danielle Kaeding
Share:

The University of Wisconsin-Superior announced Tuesday it’s suspending 25 programs, including 9 majors, 15 minors and one graduate program. The university has now suspended 40 programs since 2014. The announcement surprised faculty, some of whom said they were unaware their programs were at risk.

Jordan Milan, director of strategic communications at UW-Superior, said administration held several meetings over the last month in which leadership decided to suspend programs due in part to the low number of students enrolled in those majors and minors.

"It will allow us to offer more sections in programs that are very popular, so it just frees up those resources to put them where they’re needed most," she said.

Campus enrollment is up 3 percent this year, and Milan said there are no plans to layoff any faculty with the changes. Students will be able to finish their degrees in the suspended programs, but no new students will be enrolled.

Some of the majors that have been suspended include sociology, theater, journalism and political science. In addition, another 15 programs have been put "on warning." Milan said departments will be required to develop action plans to make changes to their curriculum, meet regional needs and be more "attractive for students."

UW-Superior suspended 20 programs three years ago as part of an effort to address a $4.5 million budget shortfall. Since then, the university’s budget deficit has been whittled down to $2.5 million.

The announcement at the meeting by Interim Provost Jacalyn Weissenburger and Interim Vice Chancellor of Enrollment Management Brenda Harms was dropped on faculty "out of the blue," Edwards said. He said every major in his department has been suspended or placed on warning.

"We were not consulted. We were just told that this is how it’s going to be, and I consider this process to be illegitimate," Edwards said. "We need to talk about this in our faculty senate, in our academic affairs council. These are the bodies who need to make this decision — not the administrators. The administrators don’t teach classes. They’re not experts in our fields."

Milan contended faculty were consulted in the university’s prior program prioritization process several years ago.

"Because of their involvement in program prioritization, their input was provided or was used in making these decisions," she said. "It really provided the baseline data for reviewing all of our programs and seeing which programs it made sense to suspend."

However, Brent Notbohm, chair of the Communicating Arts Department, said the university has suspended programs that weren’t identified as part of that process.

"I had no prior knowledge that there were serious problems with either journalism or media studies," Notbohm said. "It came as a shock."

Notbohm said faculty are upset about the decision and their limited involvement in the process.

"I guess the thing that upsets me most is we weren’t asked what we can do to make some changes to allow for some kind of sustainability in these programs," Notbohm said.

While Milan said there are no plans to cut staff, Edwards said the move was "an indirect way to try to lower the number of people employed here." The university spokeswoman rejected that notion, adding program suspensions wouldn’t mean all related courses would disappear.

"There are still courses required for other majors or are part of our university studies program commonly referred to as general education," Milan said.

Milan also said the move would help students be more successful by narrowing down their options.

"Research shows that if you provide too many choices and too many options for students, it can get very overwhelming, which can result in them making misinformed decisions," Milan said. "This often happens with particularly first-generation students, which 46 percent of our student body is first-gen."

However, Janet Branley, a UW-Superior senior studying sociology and gender studies, took offense to that line of reasoning.

"To me, that means that they think we’re all stupid," she said. "They might as well have just come right out and said it: 'These people aren’t intelligent enough to make logical choices from what we have to offer; so here, we’re going to narrow your choices and make your decision for you.'"

Branley feared the university wasn’t taking undecided students into account with the decision, noting she didn’t declare her major until junior year.

Marinel Walfridsson, president of the UW-Superior Student Government Association, urged students to gather more information about how and why the decision was made.

"This is something they are invested in and feel strongly about," Walfridsson said. "I sure do as well."

The university is going to hold several forums on campus this week to discuss the program suspensions, including one for students at noon Friday in Room 204 of the Yellowjacket Union.