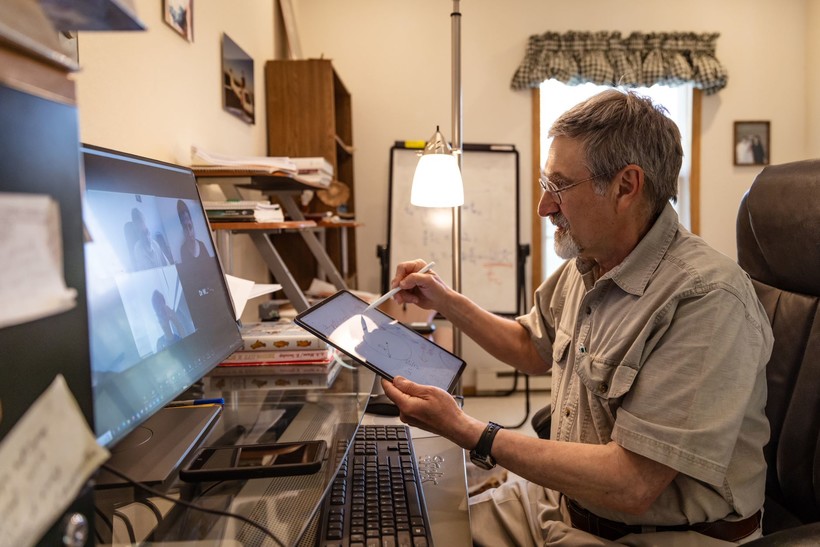 Ukrainian students get a free tutoring lesson on Zoom from University of Wisconsin-Superior professor Michael Waxman, who co-founded Tutoring Without Borders in March 2022. Photo courtesy of Nathaniel LeCapitane, UW-Superior

University of Wisconsin-Superior chemistry professor Michael Waxman has the reputation of a tough instructor. But this year he has students who might say something different.

In late February, Waxman was horrified by the destruction of homes and families in the wake of Russia's invasion of Ukraine. He felt he had to do something to help.

"It didn't take me too long to understand that what I can do is what I usually do, and that is teaching," he said.

Waxman reached out to National Institutes of Health research professor Vitaly Vanchurin. In mid-March, they co-founded Tutoring Without Borders, an organization that matches tutors with students of all ages. Nearly 3,000 students have applied for help so far, and about 1,000 professors have volunteered.

One of those professors is Julie Gard at UW-Superior.

"People are pretty amazing in their ability to survive things they should never have to survive, and to continue with their spirit, their dreams, their wonderful, sometimes quirky, interesting personalities," she said.

Gard's tutoring students include 16-year-old Leonid. She did not share his last name due to privacy concerns. Leonid is from Mariupol, where he lost his father in the war. The teen moved to New York City a few weeks ago.

Along with tutoring him in English, Gard has studied maps of the subway system with Leonid. She searched for opportunities to help him practice his language skills and, maybe, learn some math and science along the way.

Anything to prepare him for yet another transition moving to a new country.

"I think the most rewarding aspect has been getting to know young people in these intensely transitional times in their lives and just getting to feel like in some way maybe I could offer some support to them," Gard said.

She said her students from Ukraine are hungry to learn.

"They're both incredibly resilient, smart people, but it's clear that this war has completely uprooted both of their lives," Gard said.

Waxman also finds his students are dedicated to their studies — he teaches them university-level general chemistry and algebra-based physics.

"They are interested enough to attend my classes one week after another, month after month, without any diplomas or certificates. So apparently they get something from these classes," he said with a laugh.

One of his students, Katya Mintianska, moved to the small town of Lahr, Germany from Brovary, a town near Kyiv, Ukraine. The 15-year-old said she's like any other teenager: she enjoys drawing, playing sports, scrolling through social media and learning. Physics and chemistry aren't her favorite subjects, but she shows up for lessons anyway.

"He's a really nice teacher," she said. "Dr. Waxman is really good at explaining something when we just don't know how to do (it)."

She's one of five in a small group of students, some younger and one older, who are tutored some thousands of miles apart on Zoom.

"I'm so thankful that he has this time for us," Katya said.

Waxman still remembers a message he received from a student five months ago, someone who just couldn't wait any longer for the class to start.

"It is amazingly fulfilling to feel that your efforts are needed," he said.

Waxman said he learns just as much from his students as they do from him. Now, he's earning a new reputation from tough professor to patient instructor.

"What I learned, I think, is to be more kind to my students," he said.