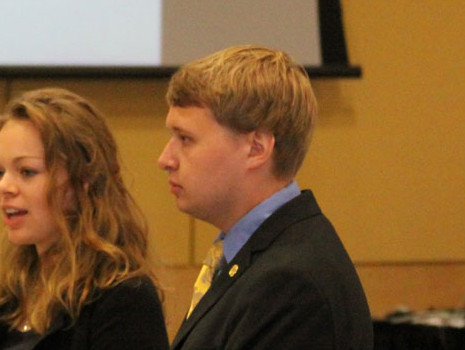 Part of the University of Wisconsin budget approved last night would make it harder for the UW student group United Council to collect dues.

Critics of the move say it will "decimate" the organization.

The group of United Council students who camped out all day in the Joint Finance Committee hearing room to wait for debate on the UW budget was looking pretty downtrodden when they saw the final product. For the first time in the history of the UW System as it's known today, it would freeze tuition at 4-year campuses. At the same time, it would potentially defund a student organization that's been there for decades.

United Council's Dylan Jambrek says his members met with every member of the budget committee and attended every public hearing. They never saw this coming.

"It's a complete disrespect to an organization that's been here since 1960 representing students - to never even bring this up as a policy matter and then sneak it in on the last day of the higher education budget."

Right now, students vote by referendum whether they want a United Council group on their campus. Campuses that vote "yes" charge students a $3 fee that students can ask to have refunded. This plan would end that system.

"This would be asking us to entirely change the way we fund our organization, and I don't know if there's a way besides walking up to a student and saying, 'Can you give me three dollars so you can have a voice in Madison?'"

Joint Finance Committee Co-Chair Rep. John Nygren (R-Marinette) said the request to change the funding for United Council came from UW-Eau Claire students who felt it was unfair. He agreed.

"A mandatory fee is not appropriate. It's something they should choose to join, choose to fund. And I think they made their case for that funding over the last few months."

Because the provision was included with the overall UW budget, it received a bipartisan 14-2 vote. United Council's Jambrek says he's hoping the governor will veto it.