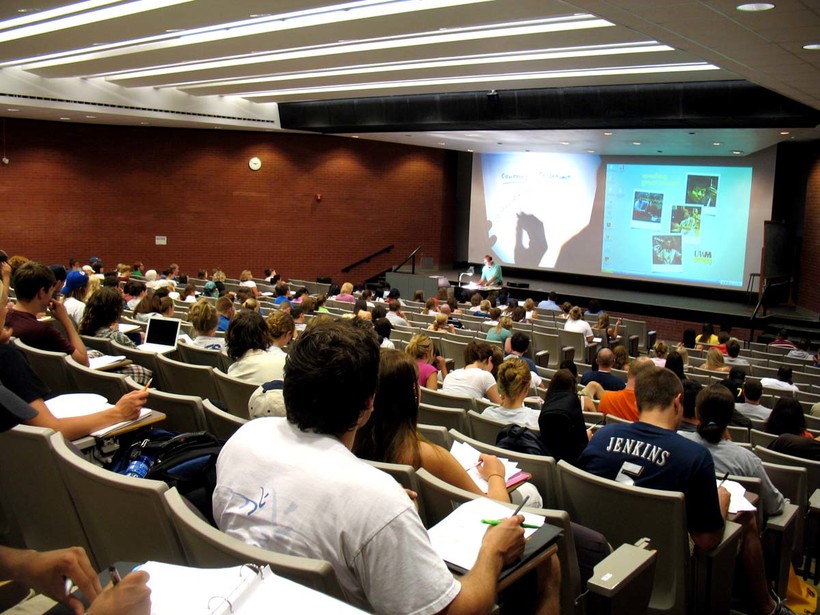 A college lecture at UW-Milwaukee.

Regents Will Vote Thursday On Policies To Replace Tenure Provisions Once Enshrined In State Law
By Kyla Calvert Mason
Share:

The University of Wisconsin Board of Regents is set to vote Thursday on a new tenure policy for the system, but professors and others are still lobbying for last-minute changes to the plan.

State legislators set the stage for changing the terms of employment for some faculty when they removed tenure protections from state law last summer. Up until then, state law had specified UW's tenured professors could only be fired for just cause or in the case of a system-wide financial emergency.

The tenure proposals going before the regents Thursday add provisions for layoffs when an academic program is discontinued. They also add provisions for systemwide post-tenure reviews, which include a process for remediation, and eventually, termination for underperforming professors.

According to UW System President Ray Cross, those additions would put tenure at Wisconsin's public universities in line with policies of similar systems, like the universities of Michigan, Minnesota and Utah.

"This puts the right processes in place to guard against tenure being a job for life," he said. "It is, however, important that tenure protect academic freedom, freedom of speech, the freedom for faculty to pursue truth wherever it may lead."

Faculty from across the system signed a letter to regents released this week asking for amendments to the tenure proposal that include taking financial priorities off the table as a reason for ending academic programs.

"That a campus could shut down a program not because it's of poor academic quality or because it's not meeting the need of students, but rather simply because another program is considered more important — that's not a just reason to have your position terminated," said David Vanness, a professor at UW-Madison and head of its faculty union.

With concerns like these before professors — coupled with a $250 million state budget cut across the system — UW-Madison has faced strong efforts to recruit faculty away from the campus in recent months. A public records request by the Milwaukee Journal Sentinel found the campus has spent close to $9 million this year in research support and salary increases to retain 40 faculty who received outside offers. At least one high-profile professor announced this week that she will leave the system because of what she sees as a weakening of tenure.

Meanwhile, other campuses like UW-Milwaukee are suffering from a limited ability to make up for financial cuts thanks to declining enrollment and a legislatively imposed tuition freeze.

That means the ongoing debate over new tenure policies is happening in an already charged environment, according to Rachel Ida Buff, associate professor of history and president of the faculty union on the Milwaukee campus.

"Faculty are feeling pretty demoralized," she said. "How we're going to offer first-class research and access in the face of these double wallops is flummoxing."

In spite of the turmoil, some see the current proposals as a missed opportunity to make the system more flexible, transparent and accountable to taxpayers. Mike Nichols, president of the Wisconsin Policy Research Institute, is advocating for the system to make more information publicly available.

"Who's getting tenure, whether or not post-tenure reviews are working," he pointed to as one example. "I think the chancellors need more flexibility at the campus level to try to tailor programs to what we need in this state, to what students need and to what businesses need."

That flexibility would mean being able to redirect resources and lay off faculty before having to shutter a program entirely. In a recent report, WPRI also questions the need for a uniform tenure policy in a system with 26 campuses that include national research universities, four-year colleges without doctoral programs, two-year colleges, and online and continuing education programs.

"I think we need to take a closer look at what the missions are of the individual campuses and departments and try to determine when and where tenure really makes sense and where it doesn't," Nichols said.

But UW-Milwaukee's Rachel Ida Buff argues top-down decisions about which programs or professors are weak links for a campus would do away with the protections that have fostered innovative research and academic work in the system.

"People work creatively when they feel fairly secure and even like they can take some risks," she said. "And because (UW-Milwaukee) is such an anchor, socially, morally, economically in our region, you can't really afford to have it be stagnant and fearful."

Faculty fears about the impact of the proposed tenure policies stem from years of combative relationships with legislators and regents, according to Cross, the UW System president.

He said whether adopted policies stoke those fears or put them to rest will depend on how they're implemented after Thursday's vote.