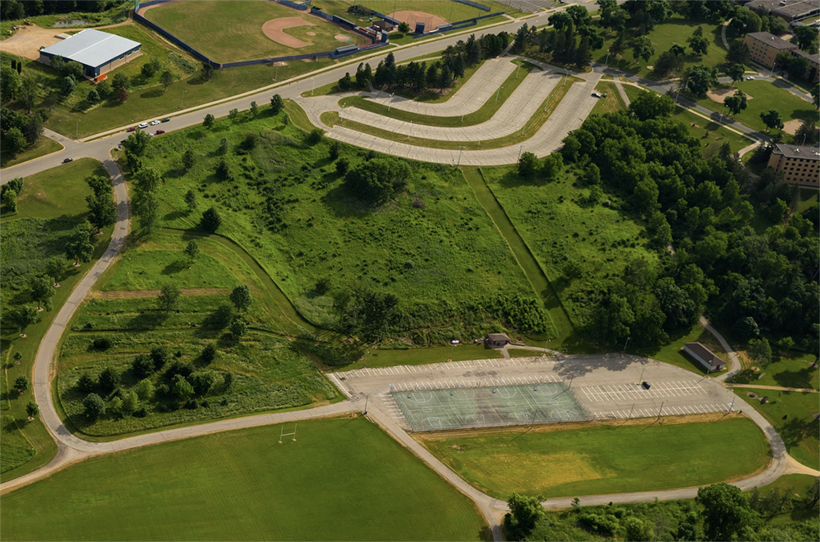 The University of Wisconsin-Platteville received state approval Thursday, Feb. 11, 2021 to construct a 2.4-megawatt solar array in Memorial Park. It will be the largest solar array owned by a Wisconsin agency and will make the university the sixth-highest on-site producer of renewable energy among higher education institutions in the United States, according to UW-Platteville. It is scheduled to be up and running by fall 2021. Photo courtesy of UW-Platteville

The University of Wisconsin-Platteville plans to build the largest state-owned solar array in Wisconsin.

The university received approval from the State Building Commission this week to build a 2.4-megawatt solar array. The array will be located on 5 acres in the campus' Memorial Park.

Amy Seeboth-Wilson, UW-Platteville’s sustainability coordinator, said construction will begin this spring, and the project is scheduled to be operational by October.

She said one of the unique parts about the project is the array will directly power campus buildings instead of sending power to the larger electrical grid.

"Basically, this array is only going to make enough electricity to cover what we use at any given time," Seeboth-Wilson said. "What's really cool for our students is they’re actually going to be able to see the electricity being made right here on campus and being used in real time. It's an economical way to do it, and it helps build up energy independence and resiliency for our institution. And it delivers a really good payback to our taxpayers."

The project is expected to offset campus electricity use by 17 percent, saving the university $217,000 annually and reducing carbon emissions by 2,300 tons per year.

Seeboth-Wilson said the current largest state-owned solar project is a 47.1-kilowatt array at UW-Oshkosh's Sage Hall. The new array at UW-Platteville will be 50 times larger than that project. But it’s not a competition, she said.

"We lift each other up. I’m really excited that what we’re doing is something that we can also implement at other institutions in Wisconsin," Seeboth-Wilson said. 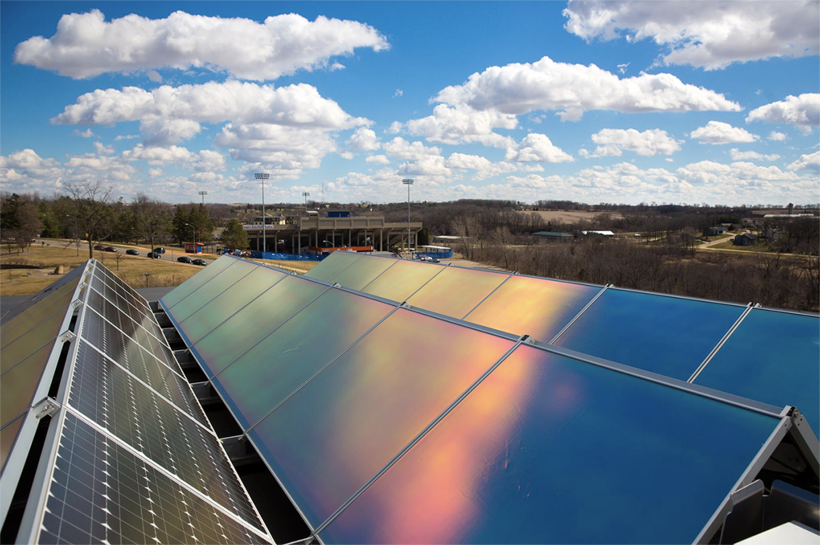 Existing solar panels on the rooftop of a University of Wisconsin-Platteville building. UW-Platteville received state approval Thursday, Feb. 11, 2021 to construct a 2.4-megawatt solar array in Memorial Park. It will be the largest solar array owned by a Wisconsin agency and will make the university the sixth-highest on-site producer of renewable energy among higher education institutions in the United States, according to UW-Platteville. It is scheduled to be up and running by fall 2021. Photo courtesy of UW-Platteville

The project was developed after students started a petition in 2018 asking the university to use 100 percent renewable energy by 2030.

"It’s no surprise that college students today really do want to see a more sustainable future," Seeboth-Wilson said. "It's really important to us at UW-Platteville that we’re providing those students with hands-on applied understanding of how those technologies work and to see that this future is really a reality that we can create ourselves."

Heather Allen is the executive director for RENEW Wisconsin, a nonprofit organization that promotes renewable energy in the state. She said the project is a "win-win" for the state, saving taxpayer dollars that would have been spent on electricity costs and allowing the university to invest them back in educational opportunities.

"I think the Platteville project is going to be a model for other universities who are looking to both cut costs and reduce emissions," Allen said. "I think there will be a lot of lessons learned we can take away from Platteville and reproduce all across Wisconsin."

Seeboth-Wilson said the project itself has already been an educational opportunity for the university’s students. The initial design was developed by students majoring in sustainable and renewable energy systems, while conservation students have researched the best native prairie plantings to use on the land and dairy science students have planned for sheep to graze it. She said computer science students are also working to develop a way to easily share production data from the array, so future students can use it for research.

"I’ve had so much fun working with these students and learning about the different perspectives and ideas that they’re bringing to the project that we never would have thought of," Seeboth-Wilson said. "We hope to just keep doing that as we move forward with building the array and running it."