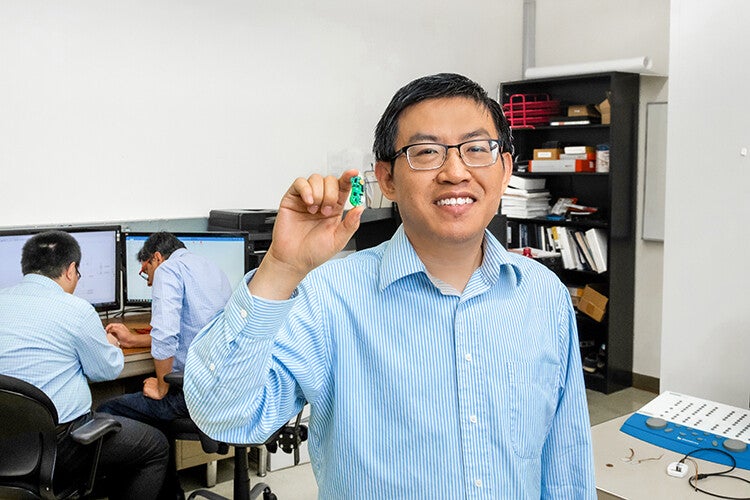 Yi Hu, an associate professor of electrical engineering at UW-Milwaukee, holds an early version of his over-the-counter hearing aid prototype in his campus lab. Hu and his team have revised the design, which is about half the size of the earlier model. Photo courtesy of Elora Lee Hen, UW-Milwaukee

A University of Wisconsin-Milwaukee professor hopes to improve the lives of millions of Americans with hearing loss through his development of low-cost hearing aids that don't require a prescription.

Yi Hu's grandfather, who lived in a rural coal mining region in China, began complaining about hearing loss in 2005. The associate professor and chair of UW-Milwaukee's Electrical Engineering department said that piqued his interest in finding a way to use his skills to help.

"He had no access to an audiologist, a very small town, and the hearing aides were just too expensive for him," said Hu. "So, that's about the time when I started my journey of developing the sound amplification devices."

Around 28 million Americans between the ages of 20 and 69 experience hearing loss according to the National Institute on Deafness and Other Communication Disorders. But a 2017 survey by the Hearing Health Foundation found that only around 14 percent of adults use hearing aids with price being a major factor.

Hu's goal was to develop a product to treat minor to moderate hearing loss in a more accessible way, hoping to sell over-the-counter hearing aids for about $200.

He began his work at the University of Texas at Dallas. After moving to Milwaukee in 2009, he continued his research as a side project. In 2019, Hu said the project gained full speed with help from Ph.D. students studying signal processing.

There are a number of complex challenges to be addressed, said Hu. First, hearing aids have to be very small, which puts constraints on battery capacity and processing power. Then there's the problem of feedback, said Hu, because microphones and speakers are very close to one another.

In lieu of a hearing test administered by an audiologist, Hu's team developed a smartphone app that connects to his hearing aid prototypes and generates what is known as an audiogram.

"Basically, this app provides the functionality of the hearing test," said Hu.

In 2017, Congress passed the "Over the Counter Hearing Aid Act," which required the U.S. Food and Drug Administration to create a new category for devices like his that do not require a prescription.

In July 2021, President Joe Biden signed an executive order to expedite that process. The FDA is currently reviewing public comments on a proposed rule for over-the-counter hearing aids. A final rule is expected this year.

In anticipation of the final rule, Hu has developed a company called My Hearing Care. He's currently finalizing his prototype and will soon talk to potential investors about bringing it to market. Hu said he expects his devices will cost less than $200, though he stresses they will be entry-level hearing aids.

"I would expect that there will be millions of people with mild to moderate hearing loss that could be helped with this kind of technology," said Hu.