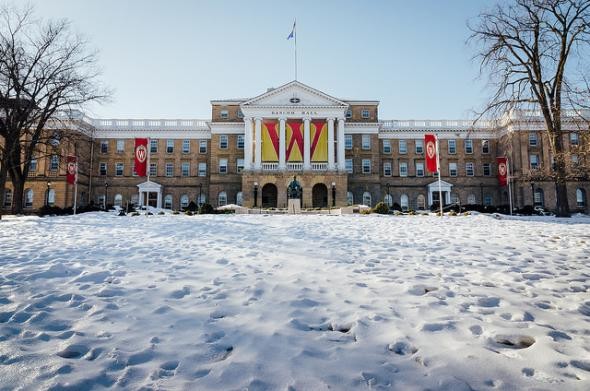 Student Turnout Increased 17 Percent Between Midterm Elections In 2014 And 2018
By Rich Kremer
Share:

The University of Wisconsin-Madison had the second highest voter turnout in 2018 of any Big Ten university in the nation. With the help of a concerted volunteer effort to increase political engagement, voting increased on campus by nearly 20 percent compared with turnout in 2014.

In the 2014 midterm election, 36 percent of UW-Madison's student body went to the polls. That was half of the registered voting population on campus and well below Wisconsin’s overall turnout of 54 percent.

"A number of the (university) presidents were just unaware and when they saw the numbers they were shocked, and they knew they could do better than this," said Goldberg.

"So, a lot of people just say students don’t vote because they’re uninformed, they’re lazy, they don’t plan ahead," Goldberg said. "It’s really not like that. They are very passionate but there are roadblocks in their way."

She cited voter ID laws, complicated absentee voting requirements and a general unfamiliarity among students of how to physically mail absentee ballot forms.

UW-Madison political science professor Barry Burden directs the Elections Research Center. He said voter mobilization efforts on campus were coordinated by a committee with representatives from across the university.

Burden said their efforts paid off because UW-Madison’s 2018 voter turnout was 52 percent. Among the nation’s Big Ten universities, UW-Madison trailed only the University of Minnesota, which had 59 percent voter turnout on campus. Burden said voter turnout across Wisconsin increased by around 5 percentage points while it jumped by 17 points on campus.

"I think that makes the 2018 election look all the more remarkable that turnout generally rose but it increased so much faster among our student body," Burden said. "They actually outpaced what they did in the presidential election two years before, which is really unheard of."

But Burden said the Big Ten Voting Challenge wasn’t the sole reason campus turnout increased. He said while it was a midterm election, which generally garners less attention than presidential elections, there was a high-profile gubernatorial race between current Gov. Tony Evers and former Gov. Scott Walker. Burden said national issues and polarization over President Donald Trump also pushed people to the polls.

Burden and Goldberg said the Big Ten Voting Challenge will continue its efforts to further increase student voting during the 2020 presidential election.