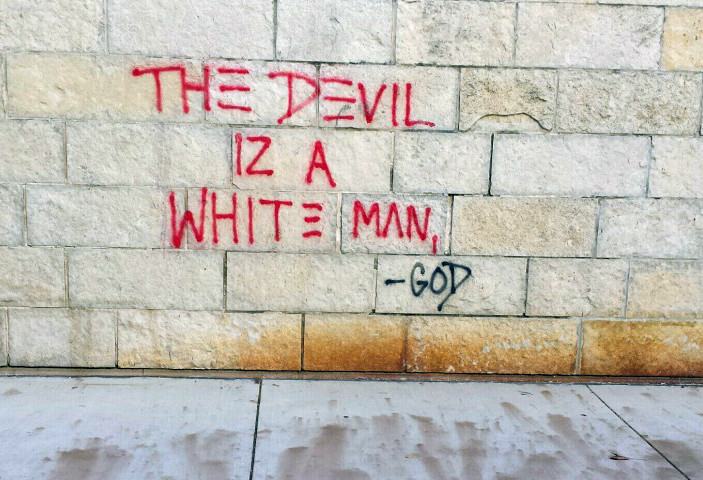 A piece of graffiti on the university's Humanities Building allegedly left by a student arrested this week.

Student Accused Of Campus Graffiti Was Arrested On Thursday
By Laurel White
Share:

The University of Wisconsin-Madison Police Chief issued an apology on Friday after campus officers interrupted a class to arrest a student earlier this week.

"I extend my sincerest apologies to the students and the professor who were in this class and witnessed this interruption," said Susan Riseling, chief of the UW-Madison Police Department.

On Thursday, two officers entered a classroom to remove a student for questioning about anti-white supremacy graffiti found around campus. The department alleges Denzel J. McDonald, 21, is responsible for 11 pieces of graffiti that said things like, "Racism is in the air, don’t breathe."

Witnesses in the classroom claim McDonald, who is black, was handled roughly and that one officer said the suspect "had his chance to get his message out, now it's our turn."

In her apology, Riseling said the officers didn't realize class had already begun when they entered the room. She said their conduct is under review and on Friday evening, the department released body camera and external surveillance video of the arrest.

As of Friday afternoon, more than 500 UW faculty, staff and graduate students had signed a letter condemning the officers' behavior.