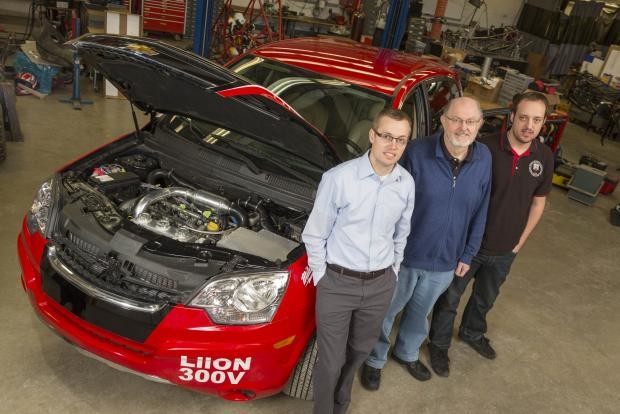 Wisconsin might not be the first place that springs to mind when people think of automotive engineering, but a research group is aiming to change that with a combustion engine that takes fuel efficiency to new levels.

The team, led by Rolf Reitz, a mechanical engineering professor at the University of Wisconsin-Madison, has built a test engine that converts significantly more fuel into motion than the best engines currently on the road. The engine uses a combination of diesel fuel and gasoline, with the proportions controlled by a computer system. The team calls the system “reactivity controlled compression ignition,” or RCCI.

Reitz said the engine uses fuel 15 percent more efficiently than the best-performing diesel engines currently on the road (which are themselves more efficient than gasoline engines). That pays off with lower emissions, and less need for emissions controls in a vehicle.

“We can meet the (U.S. Environmental Protection Agency)-mandated emission regulations without the need for expensive after-treatment,” said Reitz.

The engine, and the RCCI process, have gone from the computer drawing board to one-cylinder and multi-cylinder models — and in the latest demonstration, the team installed an engine in a 2009 Saturn, with a hybrid-electric system.

Reitz said the demonstration car shows that this kind of technology could help meet the mileage goals set by the Obama administration, which aim for a 54.5 mile-per-gallon standard by 2025.

“This vehicle can do 50 miles per gallon,” Reitz said. “And that’s just with our preliminary demonstration runs here at the university, without teams of development engineers as you would find at a car company.”

In addition to the potential payoffs in fuel economy and emissions controls, the RCCI project has been a great educational experience.

“It was a wonderful opportunity for our students,” said Reitz. “We covered the whole range from the math of computer modeling all the way to a practical vehicle and getting it running on the road.”

The technology developed at the UW-Madison campus may soon be introduced to the actual auto industry: The engine has been tested at the Oak Ridge National Laboratory and Ford Motor Company. Reitz said the team is now working with a consortium of car company representatives to see if the technology could be integrated into future automobile production.