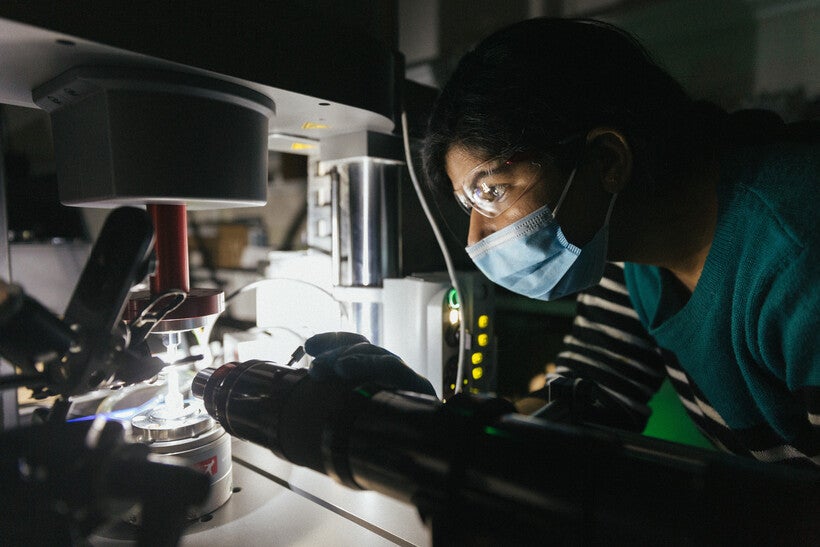 University of Wisconsin-Madison engineers have developed a new shock-absorbing foam made from carbon nanotubes aimed at reducing traumatic brain injuries in U.S. soldiers. The material has been shown to absorb shock 18 times better than existing military helmet liners and could also offer athletes better protection against concussions.

In order to tackle big issues like brain injuries on the battlefront, UW-Madison associate professor of engineering and physics Ramathasan Thevamaran thinks small — as in micrometers. He and fellow engineers at the university have developed a way to make flexible carbon tubes, around a thousand times smaller than a human hair, into a new type of ultra-shock-absorbing foam. 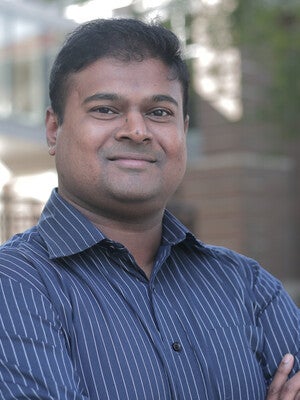 Ramathasan Thevamaran is an assistant professor of engineering and physics at UW-Madison. He and colleagues developed a new type of foam made of carbon nanotubes for use in military helmets that provides 18 times better shock absorption than existing materials. Photo courtesy of UW-Madison

Thevamaran said creating a new type of helmet padding for the military comes with many challenges. It has to be light, comfortable and must maintain its shock absorbing properties in extreme climates. Because it's made of carbon, Thevamaran said, it retains its performance at temperature around -800 degrees Fahrenheit.

Because the carbon foam is a novel material, he and colleagues designed 180 experiments to find which combination of nanotube thickness, diameter and gaps between the tubes were best at absorbing shock.

That resulted in a foam around 3 millimeters thick that uses a chemical process to grow the tubes like hair. Thevamaran said the team combined two layers and began smashing the nanotube foam to see how it recovered from the shock. 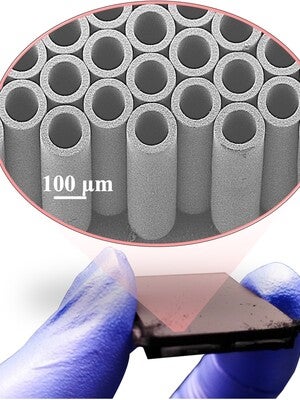 The new material has a novel architecture that consists of numerous micrometer-scale cylinder structures, each made of many carbon nanotubes. These structures give the material its extraordinary shock absorbing properties. Photo courtesy of Ramathasan Thevamaran and UW-Madison

"And the nice thing about this kind of nanotube foam is (the nanotubes) would recover almost entirely," Thevamaran said. "So, you can use them for multiple hits so they don't completely get crushed and are done in one shot."

Thevamaran's lab has partnered with Team Wendy, which manufactures military and other types of helmets.

"Now what we're doing is we take this understanding forward, and we work with Team Wendy to test them in actual helmet liners so that we could evaluate them," he said.

Team Wendy will then perform drop tests using a mannequin with sensors that detect forces from impact. Thevamaran said if all goes well, researchers will continue fine-tuning helmet prototypes that could eventually make it to U.S. soldiers.

"We want to reduce traumatic brain injury due to direct impacts, blunt impacts or shock loading, even secondary impacts during a blast," Thevamaran said.

But he notes the potential for the new type of shock absorbing foam go well beyond military applications.

"Starting from a bicycle helmet where you could incur concussion to football players," Thevamaran said.

The UW-Madison researchers are patenting the new type of foam, which was developed in collaboration with UW-Madison's PANTHER program, which seeks to better detect and protect against traumatic brain injuries.