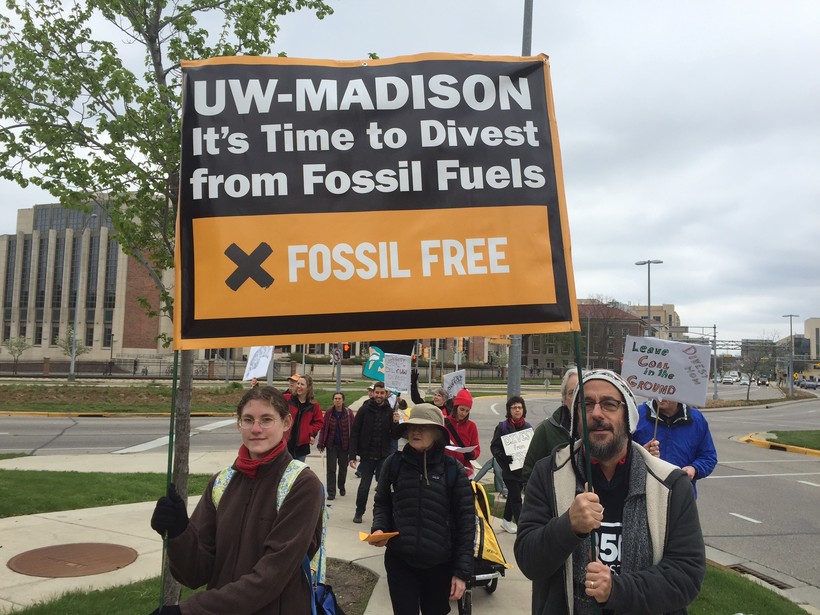 Activists march to the UW Foundation building to protest investment in the fossil fuel industry.

About A Dozen Alumni Marched To UW Foundation Building In Support Of Divestment
By Parth Shah
Share:

About a dozen University of Wisconsin Madison alumni returned to their alma mater Friday to urge the university to stop investing in fossil fuels.

They brought a letter with more than 250 alumni signatures to the UW Foundation, the universities fundraising organization. The letter calls for the foundation to stop investing in the fossil fuel industry by 2017.

"I have four grandchildren who are 14, 12, 9 and 8. They will be living in the world that we are leaving behind for them. I think it is very important to make sure the planet is sustainable," said Judith Stadler of Fitchburg. She graduated from UW-Madison in 1965.

Stadler said combatting climate change is a major reason to divest. Beth Esser, an activist with the environmental group 350 Madison, said the university could also make more money by investing in the growing renewables market.

"Theres an online carbonizer where you can plug in your endowment. We plugged in the UW endowment. And if they had divested three years ago when we first started asking them, this online calculator suggests they lost between $40 million and $100 million by not divesting," she said.

In addition to the letter, activists brought a giant check for $7,000 to the foundation. If the university divests by the end of 2017, they will receive the money. If they don't, the money goes to the 30 other universities that have already pledged to divest from fossil fuels.

Vince Sweeney, a spokesperson from the foundation, said they're open to meeting with activists.

"People are committed to trying to change something and we don't want to just shut the door," he said. "We want to at least keep that door open and maintain a dialogue to see if we can come to some understanding of each other."