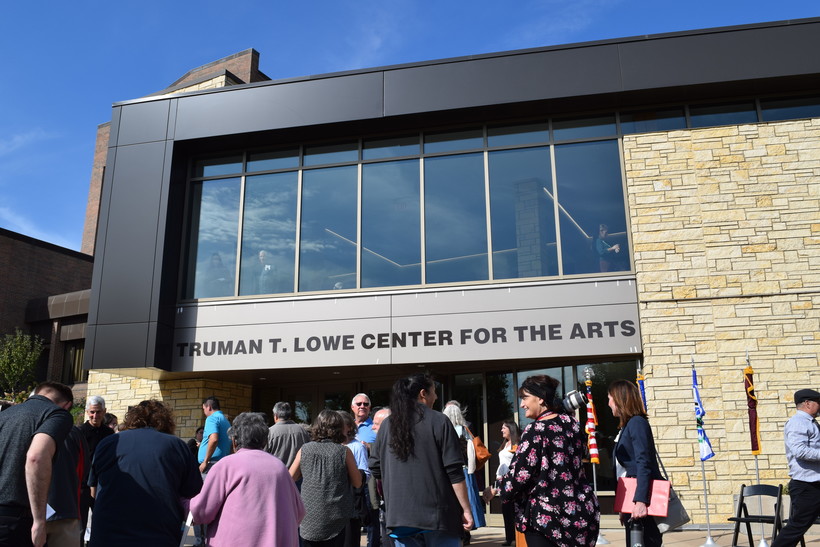 Family of Truman Lowe, members of the Ho-Chunk Nation and UW-La Crosse staff enter the new Truman T. Lowe Center for the Arts after a dedication ceremony on Monday, Oct. 4, 2022. Hope Kirwan/WPR

Celebrated for his minimalist work referencing his Ho-Chunk heritage, Lowe is also remembered as an influential educator, promoter of modern Native art
By Hope Kirwan
Share:

The University of Wisconsin-La Crosse has dedicated its Center for the Arts to nationally renowned Ho-Chunk artist Truman Lowe. It’s the first building on the western Wisconsin campus to be named after a person of color.

Lowe, who graduated from UW-La Crosse in 1969, is best known for his large art installations using natural materials. 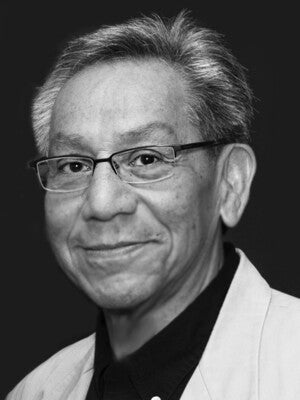 Truman Lowe, a sculptor and educator who graduated from UW-La Crosse in 1969. Courtesy of UW-La Crosse

"Truman was one of the foremost Native American artists of his generation," said art historian Jo Ortel at a building dedication ceremony held by UW-La Crosse on Monday. "He made an indelible mark on the art world through elegant, minimalist work that referenced his Ho-Chunk heritage and the woodland environment of the upper Midwest."

Born in Black River Falls, Lowe’s work has been shown nationally and internationally. He received a Master of Fine Arts degree at UW-Madison and later returned as a professor, chairing the art department and serving as coordinator of the Native American Studies program during his 35-year career at the university. He also served as curator of contemporary art for the Smithsonian Institution’s National Museum of the American Indian in Washington, D.C. from 2000 to 2008. Lowe died in 2019 at the age of 75.

Ortel said Truman’s art wove together Native and non-Native influences, making it "as thoroughly Ho-Chunk as it is modern and American."

"He was one of a group who helped broaden perceptions of 'Indian art.' But I think he was nearly unique in doing so while also teaching full time," Ortel said.

UW-La Crosse Chancellor Joe Gow proposed renaming the Center for the Arts in honor of Lowe last fall and the UW System Board of Regents approved the dedication in February. The building currently houses the School of Visual & Performing Arts, which includes the Art, Theatre and Dance and Music departments.

During the ceremony Monday, Lowe’s daughter Tonia Lowe also announced the creation of a new scholarship for Native American students in Lowe's honor. She said her father was the "ultimate education encourager," in part because of the support and encouragement he received from his family and Native community while he attended UW-La Crosse.

"Because he struggled as a student and those encouraging words that he received were really what propelled him through college, he really wanted to be able to do that for other people. Especially Native students because he understood what the challenges might be for them in particular," Tonia said.

She said her father’s life mission was to promote Native art and bring it "out of the past and into the future and have people see it as a living, breathing, evolving thing."

"He had a really unique way of helping people connect with the natural world and sort of objects of cultural significance. Even if it’s just a momentary connection, it’s something that, you feel it," she said.

Tonia said Lowe loved La Crosse and was happy to return to the local campus for presentations later in his career. She hopes the permanent celebration of his life and legacy will leave a lasting impact on future students.

"Representation matters. So if you’re a Native student coming onto campus and you see that the Center for the Arts is named after a Ho-Chunk artist and educator, I think the university is basically saying, 'We see you and we believe in you.' And that inspiration, that’s huge for Native students," she said. 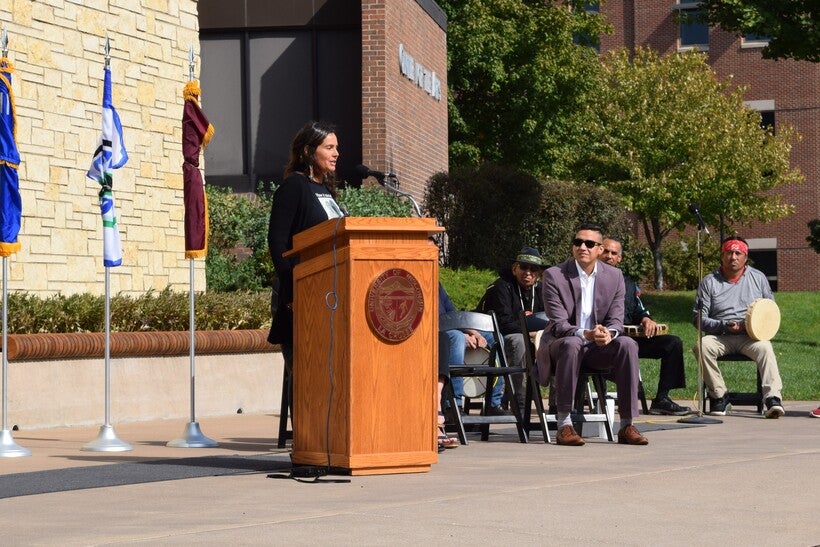 Tonia Lowe speaks about her father Truman Lowe at a dedication ceremony for the new Truman T. Lowe Center for the Arts at UW-La Crosse on Monday, Oct. 3, 2022. Hope Kirwan/WPR