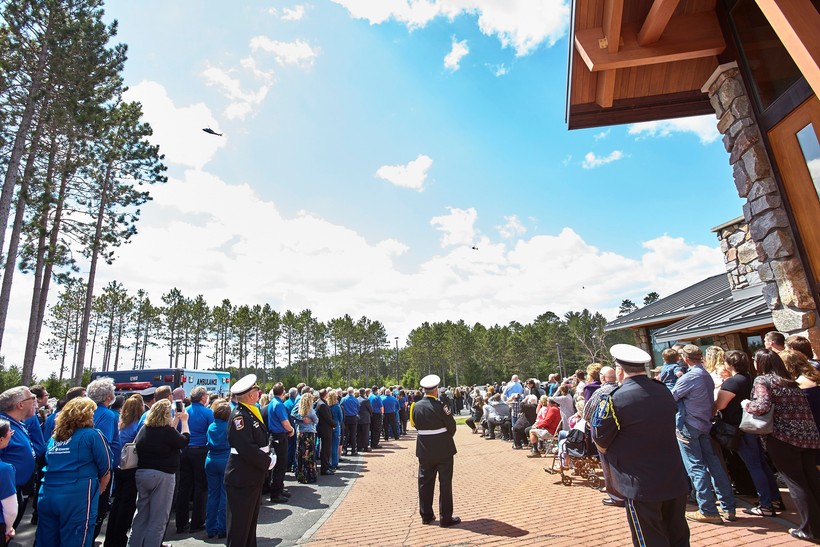 Six medical helicopters fly in formation following the memorial service for the Spirit 2 crew members who lost their lives in the April 26, 2018 crash in Hazelhurst, Wisconsin. Peter Vance/Ascension Wisconsin

It may be months before a cause is determined for the medical helicopter crash that killed three crew members in northern Wisconsin.

But at least one experienced observer is questioning whether single-engine helicopters like the one that crashed should be used for medical transport.

The Ascension Spirit 2 flight went down in clear skies the night of April 26 in Hazelhurst just a few miles south of its base at the Howard Young Medical Center in Woodruff. It was returning from a successful mission to Madison.

The crew was experienced. Pilot Rico Caruso had logged more than 3,200 flight hours.

"Rico was a friend and was one of the most respected pilots, not only in our area, but nationally," said Matt Thompson, EMS outreach coordinator for Spirit.

"It's not an easy job. When they are in the helicopter, they are working with the patient from the time they lift until the time they that they deliver that patient. It's not just a simple ride," Thompson said. "They're experts at what they do and they prepare for all scenarios. Our team was as good as it gets."

According to the preliminary report from the National Transportation Safety Board, the single-engine Eurocopter AS 350 underwent 100-hour and 600-hour safety inspections April 25, the day before the crash. It was equipped with an enhanced ground proximity warning system. Still, it clipped a 70-foot tree and crashed in a wooded area.

Dr. Michael Abernethy, chief flight physician of UW Health Med Flight in Madison, does not believe the Eurocopter AS 350 should have been flying.

"You'd be hard pressed to find a physician in the United States who has spent more time in the back of a helicopter caring for patients. I've been doing it for almost 30 years," Abernethy said.

"Air Methods is our vendor." Abernethy said. "They are responsive. They maintain quality. Our pilots are good. I feel our pilots are well-trained." But both of the UW Health Med Flight helicopters are twin-engine models. Abernethy said single-engine helicopters like the Eurocopter that crashed "have no place in the business of helicopter EMS."

"Redundancy. In the event of an engine failure, you still have a second engine," Abernethy said. "If you go to the rest of the developed world, no one uses small, single-engine helicopters. No one."

Abernethy is also a clinical professor at the University of Wisconsin School of Medicine and Public Health's Department of Emergency Medicine. He has studied helicopter EMS programs in the United Kingdom, Ireland and other parts of Europe. He has been tracking statistics on medical helicopter safety in the United States for years.

His statistics show that of the roughly 1,000 medical helicopters in use in the U.S., about 16 percent are single-engine Eurocopters or similar models, but they have been involved in 55.5 percent, or 15 of the 27, fatal crashes since 2009.

"I personally would never work on one, knowing what I know," Abernethy said.

Of the 12 medical helicopters in use in Wisconsin, Abernethy said only three are single-engine models: a Bell 407 flown by Aspirus in Wausau, an AgustaWestland AW119 flown by Life Link in Rice Lake, and the Spirit Eurocopter AS 350 that crashed.

Spirit’s other helicopter, Spirit 1, is a twin-engine Airbus H145 based in Stevens Point.

Abernethy said helicopter safety is both a professional and personal concern for him. A twin-engine UW Health Med Flight mission crashed near La Crosse in 2008, killing three crewmembers.

Air Methods responded to WPR’s safety questions with a statement.

"The accident is currently under investigation by the NTSB and FAA, and Air Methods will support their work in every way possible," the statement noted.

The Ascension Spirit and Air Methods program had to meet standards set by the Commission on Accreditation of Medical Transport Systems, whose board of directors is comprised of members of 21 medical and medical transport organizations. Associate Executive Director Dudley Smith said the commission’s safety standards are upgraded every two to three years.

"Programs are required to have a safety management system, and then there are also standards in there about what kinds of equipment and things need to be on the vehicles," Smith said. "We're doing everything we can to decrease the likelihood of accidents happening."

'We're Going To Be Here To Stand Spirit 2 Back Up' Ascension Spirit workers mourn the loss of the Sprit 2 flight crew at the Friday, May 4, 2018 memorial service in Woodruff.Peter Vance/Ascension Wisconsin

On May 4, more than 1,200 people, many of them paramedics, filled Holy Family Catholic Church in Woodruff for a memorial service for the Spirit 2 flight crew.

No one at the service questioned Ascension Spirit’s or Air Methods’ commitment to safety. Members of both organizations gave the eulogies for the crash victims.

Vince Freeborn, area manager-Wisconsin for Air Methods, said Spirit flight crews were eager to get back in the sky.

Six medical helicopters flew in formation over the church, a show of support from EMS teams across Wisconsin.

On May 10, Spirit 1 returned to service.