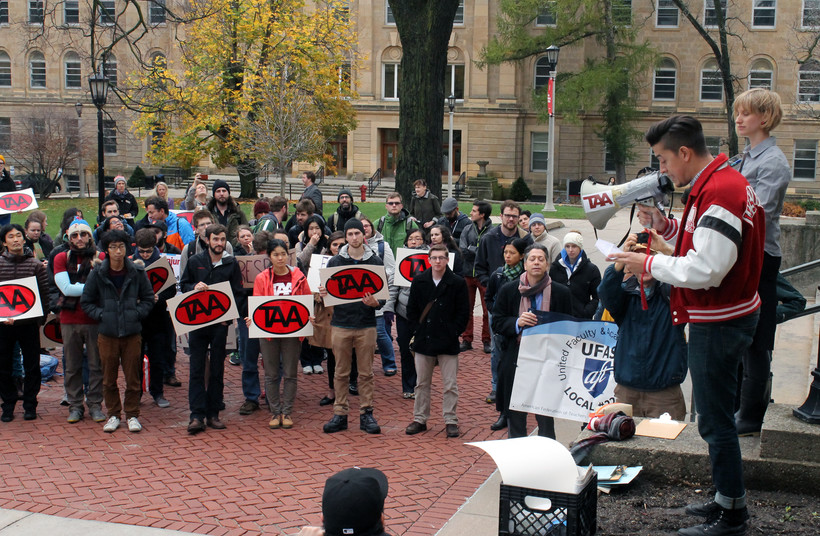 Dozens of graduate students crowded around Bascom Hall on the University of Wisconsin-Madison campus Wednesday afternoon to protest the university’s new payment policy for graduate assistants.

The change would make it so graduate assistants can only be appointed to work for 20 hours a week. Individual departments will continue to determine how much assistants are paid, however they will no longer use a pay scale set by the university.

Sergio Gonzalez, the president of the teaching assistants union at UW-Madison, said the move will hurt students in the humanities.

"For a department that has access to outside funding, this may seem like a great opportunity. But for departments that don't have that opportunity, this doesn't really do anything," Gonzalez said.

The union has called for the university to abandon the policy as a whole and provide campus-wide pay increases for all graduate assistants.

UW-Madison did provide a 4.7 percent pay raise for teaching assistants and program assistants in the 2013-14 school year, and an additional 2 percent raise in 2014-2015. Despite those raises, Gonzalez said many graduate students make less than a living wage. He said the average salary for graduate assistants at UW Madison is less than $16,000.

"We rank below the average in the Big 10 and across other Tier 1 research universities in the United States," said Gonzalez.

A committee focused on restructuring the payment plan has been meeting for more than two years to discuss the changes. No graduate students were asked to participate.

Gonzalez and other union members met with Graduate School Dean William Karpus in early November after they received insider emails regarding the proposed policy change that was initially set to go into place this coming May.

"After all of the questions we raised, Dean Karpus understood it was necessary to delay the implementation of the plan," Gonzalez said.

Karpus said stipends will not decrease and the change would put UW Madison's graduate assistant policy in line with many of its peer institutions.

The changes will go into effect May 2017.