Albert Colom Will Leave Role As Head Of Enrollment Management But Will Continue Working For Campus Through September
By Rich Kremer
Updated:
Monday, February 24, 2020, 5:40pm
Share:

A University of Wisconsin administrator under investigation for gender discrimination and creating a hostile work environment is stepping down from his leadership role.

In an email sent to campus employees and students, UW-Eau Claire Chancellor James Schmidt said Vice Chancellor for Enrollment Management Albert Colom is stepping down from his position effective immediately.

On Feb. 13 the UW-Eau Claire student newspaper reported a complaint had been filed against Colom alleging he created a hostile environment in the campus admissions office and that he routinely disparaged female leaders within the department and elsewhere within the university. 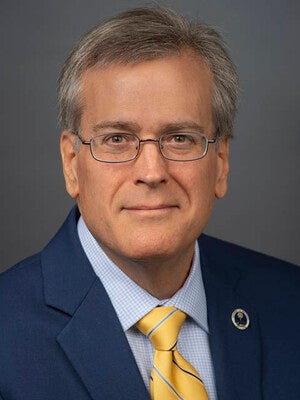 The complaint was filed by Angie Swenson-Holzinger on Feb. 3 as she resigned from her job as UW-Eau Claire’s associate director of advising. That day she forwarded a copy of her exit survey to the campus Title IX and affirmative action director that said Colom began disparaging her and other females beginning in June and that she had never heard Colom disparage a male leader on campus.

Swenson-Holzinger's resignation was the sixth from UW-Eau Claire's admissions office since Colom was hired in 2018. A campus spokesperson said an investigation into Colom's behavior was underway in light of Swenson-Holzinger's complaint.

In an interview with WPR, Swenson-Holzinger said she's glad her former coworkers in the admissions office won't have to endure the alleged treatment from Colom, but she said Schmidt was told in 2019 about similar complaints about Colom from other admissions staff and even employees from other universities.

"I do still think some questions need to be answered about how he was able to be hired with such a questionable past at previous institutions and more importantly why the chancellor didn’t act sooner when concerns were brought to his attention," Swenson-Holzinger said.

In Monday's email to campus, Schmidt said while Colom's last day on campus was Friday he will remain employed by the university until Sept. 2.

"While he will no longer be working on campus or supervising employees, he will be re-assigned duties related to his extensive enrollment management expertise during this period," wrote Schmidt.

Schmidt said he will meet with enrollment management directors at UW-Eau Claire and its branch campus UWEC-Barron County this week about ensuring a smooth transition in the admissions office.

Schmidt's email also included a statement from Colom that said his decision to step down as vice chancellor "is in the best interest of the University."

"I told Chancellor Schmidt it has become increasingly apparent to me that, regardless of the outcome of the current investigation of allegations made against me, I am no longer able to effectively serve UW-Eau Claire in a senior leadership role," wrote Colom.

During a press conference Monday afternoon, Schmidt said he did not ask Colom to resign and that it's not uncommon for complaints to be lodged within the university.

"During a typical year UW-Eau Claire will have five, 10, 15 formal personnel complaints. All are investigated," Schmidt said. "However, unlike this instance, other investigations are conducted privately and not in the public sphere."

Schmidt sounded a critical note regarding media coverage of the Colom complaint and investigation, noting only "one side of the story" has been told.

"I will tell you that I’ve been approached by several women within that division who’ve come forward to tell a very different story," Schmidt said. "So, I have access to a lot more data. I’m not going to share it. I won’t go further than what I did. But all of the data needs to be brought together with an investigator who’s trained to differentiate and critically analyze that through interviews and other ways that they would do that investigation."

Schmidt praised Colom's work in transforming enrollment management at UW-Eau Claire. He said Colom spearheaded Apply in July, an effort to encourage potential students to apply for admission at UW-Eau Claire several weeks before the school year begins, and created a program for students not ready for UW-Eau Claire to begin their studies at the university's branch campus in Barron County before they transfer to the main campus. Still, Schmidt said he and Colom agreed keeping Colom on campus would distract from those efforts.

"Our strategic enrollment goals are very important," said Schmidt. "Vice Chancellor Colom did an excellent job in putting us on that track. But we realized it wasn’t in the best interest of the institution to drag this out further."

The investigation into the allegations against Colom is ongoing. Schmidt said his administration is still working out how Colom will continue working on enrollment management issues without physically being on campus.