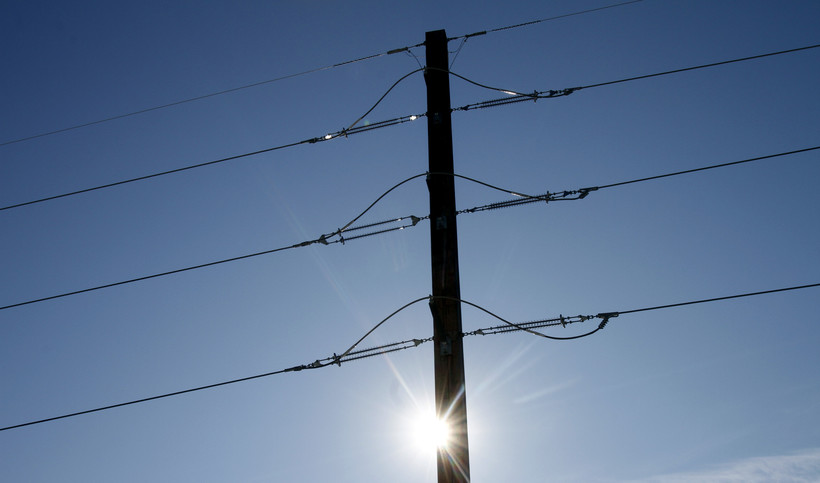 Three new transmission lines that are estimated to cost around $2.2 billion will cross through Wisconsin under a large expansion approved by the Midwest grid operator that’s designed to facilitate the clean energy transition.

The board for the Midcontinent Independent System Operator signed off on a $10.3 billion portfolio of 18 transmission projects for the Upper Midwest on July 25. The lines are expected to support 53 gigawatts of renewable energy and provide between $23 to $52 billion in benefits as utilities retire aging coal plants. Projects in Wisconsin are slated to start coming online as early as 2028.

"Overall, the projects approved by the Midcontinent ISO (MISO) will lead to continued electric reliability in Wisconsin and throughout the Midwest, increased access to renewable energy, and the ability to keep bills affordable for our customers," said Chris Ouellette, a spokesperson for Xcel Energy. "The projects will help all Midwestern utilities ensure reliability when integrating the variable nature of renewable energy and increased resilience in the face of severe weather events."

The work affecting Wisconsin represents roughly double the investment proposed for the state during the last round of transmission lines approved by MISO in 2011. That included what is now known as the Cardinal-Hickory Creek transmission line. That project has been hotly contested, and it’s the final undertaking from that round still being built.

The regional grid operator plans to begin issuing requests for proposals this fall. All projects approved would be built in MISO’s Midwest subregion that includes Michigan, Minnesota, and Wisconsin. Utilities building the transmission lines would still need the approval of state regulators. The cost would be paid for by customers in that region.

The state’s five largest investor-owned utilities have all pledged to go carbon neutral by 2050. President Biden has set a goal for the nation’s power sector to have net-zero emissions by 2035. As the clean energy transition has accelerated, MISO developed the long range transmission plan to ensure reliable power as more renewable generation is tied into the grid and to boost resiliency amid extreme storms.

The largest proposal in Wisconsin is a $1 billion transmission line that would run through the central region of the state. Xcel said the utility and other partners expect to replace existing lines with 345-kilovolt lines as part of that project, although some lower-voltage lines may remain in place. American Transmission Company and other local transmission owners also have lines in the region. 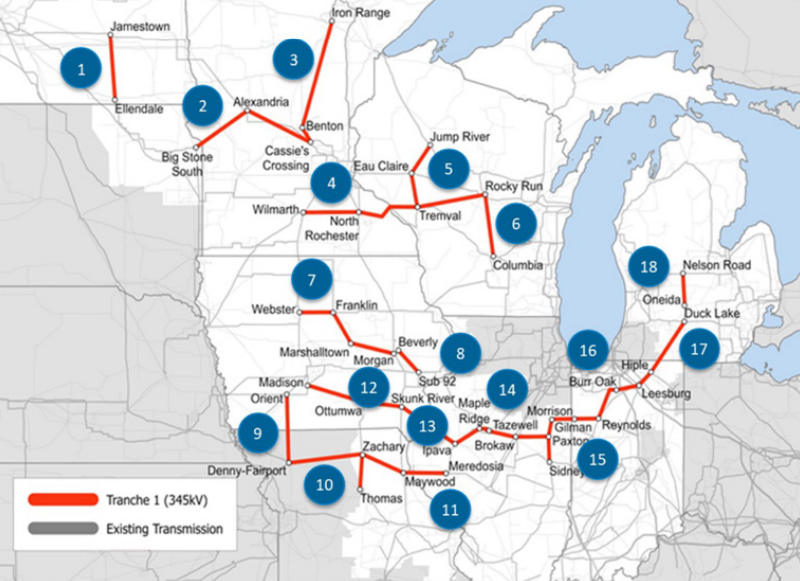 American Transmission Company said in a statement that it’s supportive of MISO’s plan.

"We are in the process now of collaborating with other utilities and stakeholders to determine the succession of how these vital projects will be placed in service in a cost-effective manner," said ATC spokesperson Alissa Braatz in a statement.

"We would be working with the other utilities to come up with potentially a joint proposal of how you would do it," said Porath.

While renewable advocates and utilities welcome word of the investment, groups representing industrial energy customers filed a complaint with the Federal Energy Regulatory Commission over the plans. The Wisconsin Industrial Energy Group, or WIEG, and others argue that MISO's plan to exclude around $5.5 billion in projects from a competitive bidding process will lead to customers paying more for transmission lines, including in Wisconsin.

Todd Stuart, executive director of WIEG, said the way MISO defines work as "upgrades" to transmission lines also blocks competition. The grid operator plans to assign projects to existing owners of transmission lines if at least 80 percent of the costs are due to upgrading the system, arguing that competition on small pieces of projects could delay their construction.

"I don't think Wisconsin families and businesses can afford this burden. We need all tools for reducing rates or mitigating rates," said Stuart, adding that includes competitive bidding.

Stuart said research has shown that competitive bidding can save between 15 and 40 percent on projects.

Eight states in the region that MISO oversees have "right of first refusal" laws that block other developers from bidding against utilities, according to the complaint. Groups contend the state laws interfere with FERC’s authority to set reasonable rates for interstate transmission projects, as well as a federal order issued in 2011 that aimed to boost competition.

Wisconsin has not yet enacted such a law. State legislation introduced earlier this year sought to give owners of transmission lines in Wisconsin the right to build MISO-approved projects that connect to their existing lines, preventing competition. But the bills failed to pass in the last session amid opposition from WIEG, Wisconsin’s Citizens Utility Board, and Americans for Prosperity.

Federal regulators approved MISO’s plan last week, but they did share concerns that consumers may not be adequately protected in the selection and construction of projects.

"They themselves have expressed the concern that there may be negative consequences at work where there's less incentive for transmission owners to reduce the costs of these transmission projects and maximizing the benefits to the greatest extent possible," said Corey Singletary, CUB’s director of regulatory affairs. "Really that lack of incentive to manage cost, or to think innovatively about how to meet transmission needs, is where the customer loses out."

Wisconsin's electric rates are higher than both the Midwest and national average. Both WIEG and CUB argue transmission costs put upward pressure on the state's rates. Transmission costs increased at an annual rate of 4.5 percent between 2009 and 2018, according to data from the Public Service Commission.

PSC data shows transmission expenses among the state’s largest investor-owned utilities increased from $263.1 million to $684.5 million from 2005 to 2020, representing an increasing share of their total operating expenses. Even so, the PSC said expenses paid by customers have remained "comparatively stable" as costs ranged from $3.9 to $4.5 billion each year between 2008 and 2019.

The $10.3 billion portfolio approved by MISO's board represents the first of four sets of new transmission line projects in the region served by MISO, which covers 15 states. Stuart said up to $100 billion of large transmission projects would be built in the region, adding Wisconsin ratepayers would be on the hook for around 15 percent of the costs to build those lines.